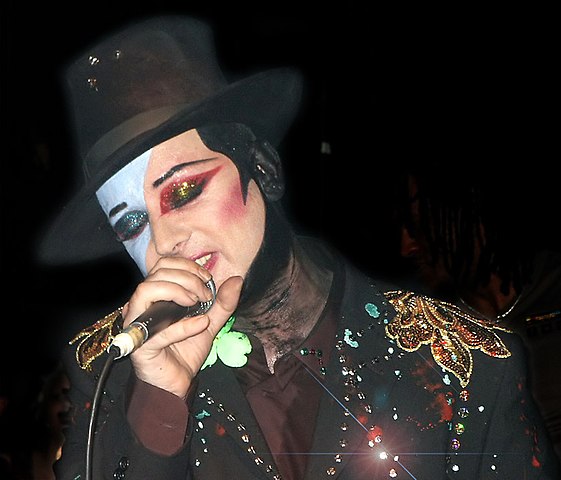 Born George Alan O’Dowd, Boy George is best known by his stage moniker. In the past the singer has also gone by name’s like Lieutenant Lush.

Boy George is the son of Gerry O’Dowd, a builder and Dinah O’Dowd. He is the second of five children, his older brother is named Kevin, whilst he also has two younger brothers, Gerald and David and a sister Siobhan. He also has an older half-brother named Richard who was born in Dublin in 1957 when his mother was only 18. His family were a working class Irish Catholic family and his has compared his family history to a sad Irish song saying that his Grandmother was taken at the age of six from her family home and placed into an Industrial School. His great Uncle Thomas Brian was executed during the Irish War of Independence in 1921. George’s mother has also said that Gerry O’Dowd was abusive and that he beat her even when she was pregnant. George’s younger brother Gerald was convicted of killing his wife after suffering an episode of schizophrenic paranoia.

The singer currently lives in a Gothic-style mansion in the exclusive Hampstead area. When filming The Voice in Australia he lived in a Point Piper mansion, built in the 1930’s. The home featured chandeliers in every room and cost $5,500 a week.

The singer is approximately 183 cm’s tall and currently weighs approximately 80 kg’s after losing almost 40 kg’s of weight – having previously weighed around 120 kg’s.

Boy George is famous for being an English singer, songwriter, fashion designer and DJ. He is best known for being the lead singer of the band Culture Club and recorded a number of hit songs with the band. He is known for his androgynous look and for his soulful voice and blues sound. In the late 1970s to 1980s he joined the New Romantic movement, which was becoming popular at the time. In 2015 the singer received the Ivor Novello Award for Outstanding Services to British Music.

Boy George’s androgynous style got him the attention of Malcolm McLaren who had previously managed the Sex Pistols. He arranged for the singer to perform with Bow Wow Wow but his time with the band was problematic and he did not gel well with Anabella Lwin. The singer eventually left the group and started his own band with bassist Mikey Craig, drummer Jon Moss and guitarist Roy Hay. The band originally called themselves the Sex Gang Children but settled on Culture Club to reflect the varied ethnic and cultural backgrounds of the band members. The band recorded a demo, paid for by EMI Records, but they declined to sign the band. Virgin instead expressed interest and signed the band.

The band’s first album ‘Kissing to Be Clever’ was released in 1982. The single ‘Do You Really Want to Hurt Me?’ on the album became an international hit, reaching number one in more than a dozen countries and peaking at number two in the US. Their single ‘Time’ and ‘I’ll Tumble 4 Ya’ also reached the top ten in the US, making them the first band since the Beatles to have three top ten hits in the US for a debut album.

Their next album was titled ‘Colour By Numbers’ it became an enormous success, peaking at number one in the UK and number 2 in the US. The song ‘Karma Chameleon’ peaked at number one in 16 countries and stayed at number one in the US for three weeks. It was the best-selling single of the year in the UK. The band’s third album ‘Waking Up With the House on Fire’ did not perform as well as their previous album. Boy George made a cameo appeared in ‘The A-Team’ in an episode called ‘Cowboy George’. In 1986 the band released their fourth album ‘From Luxury to Heartache’ which included the hit single ‘Move Away’. Around that time rumours began to circulate that the singer has a drug problem. He was arrested for cannabis possession and with a number of pressures on the band including the poor performance of their last two albums, a band romance gone bad and a wrongful death lawsuit, they disbanded.

After the end of the band in 1986, Boy George sought treatment for his drug addiction. The following year he released his first solo album ‘Sold’ which as mildly successful in Europe but less so in the US. He followed the album’s released with ‘Tense Nervous Headache’ in 1988 and ‘Boyfriend’  in 1989.

What has he done since his career breakthrough

In 1989 the singer formed his own record label, More Protein and began to record under the name ‘Jesus Loves You’ with the songwriter pseudonym Angela Dust. He released a number of underground his songs in the 1990s including ‘After the Love’, ‘Generations of Love’ and ‘Bow Down Mister’. Between March 1990 and 1991 he presented a music show on Blue Radio, he also released the hit song ‘The Crying Game’. He also developed a career as a DJ, playing in night clubs.

He worked with rave/house promoters Fantazia on an album titled ‘The House Collection 2’. In 1995 the singer released a rock album titled ‘Cheapness and Beauty’. His next album released was ‘The Uncoupable One Man Bandit – Volume One’, it was not initially released by major labels.

In 2003 he presented on the London Radio station LBC 97.3 and appeared as a guest host on ‘The Friday Night Project’.

In late 2007 he released two electronica/dance collaborations and appeared as a special DJ at the Court Hotel in Perth. He also performed as a DJ at the Hordern Pavilion in Sydney.

In 2012 he performed at the Melbourne International Arts Festival as a guest DJ. The following year he released the song ‘Coming Home’. In 2016 the singer joined the fifth season of ‘The Voice Uk’ and later joined ‘The Voice Australia’ which he returned to in 2018 and 2019, he’s also due to return to the show in 2020.

The singer has an estimated net worth of $35 million thanks to his successful albums with Culture Club and career as a DJ.

The singer’s sexuality has gained a lot of attention due to his androgynous appearance and he has stated that he is bisexual in the past. He has said that he was in a relationship with Culture Club drummer Jon Moss. In 1995 he stated that he was gay and talked about the experience of telling his parents in a 2008 documentary.