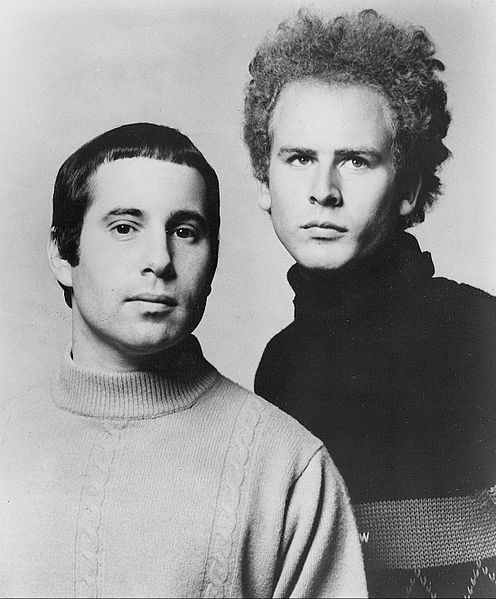 Simon & Garfunkel are famous for being an American folk-rock duo made up of the singers Paul Simon and Art Garfunkel. The duo was one of the top-selling musical groups of the 1960s and has had a number of hit songs peak at number one on the charts.

The duo first met in school in 1953 where they began to practice music together. As teenage boys they achieve some success under the name of Tom & Jerry before later being signed to Columbia Records.

The duo is well known for their sometimes difficult relationship and regular disagreements. The group broke up in 1970 and both Simon and Garfunkel went on to have successful solo careers. The duo has won more ten Grammy Awards over the course of their career and they gained entry into the Rock and Roll Hall Of Fame in 1990. Together they have sold more than 100 million records and the duo is one of the best-selling groups of all time.

Paul Simon and Art Garfunkel were raised in a predominantly Jewish neighbourhood and lived only a few blocks from each other. They both attended school together and showed an early interest in music, especially rock and roll.  The boys began their friendship in 1953 after they appeared in a sixth grade version of Alice in Wonderland. The boys started their own doo-wop group with three other friends and began performing at their school dances. When they made the transition to high school the boys wrote their own song. The later wrote the song ‘Hey Schoolgirl’ which they recorded at the Sanders Recording Studio in Manhattan and were overheard by Sid Prosen who signed them to his label Big Records.

The boys used the name Tom & Jerry with their label and Prosen bribed a DJ to play the song on the radio.  They released an additional three singles with the record but none of them were successful. After graduating high school and whilst still with their label, Simon released his own solo song ‘True or False’ which caused tension with Garfunkel. Garfunkel recorded his own solo music but after graduating in 1963 the duo got back together. They began performing at open mic nights in Greenwich Village and got the attention of Columbia producer Rom Wilson and lead to them being signed by Columbia Records. The duo recorded their debut album ‘Wednesday Morning, 3 A.M’ and released it in 1964. The album sold only 3,000 copies and it’s poor performance promoted Simon to move to England. While he was there he signed to the label Oriole as a solo artist before inviting Garfunkel to come and stay with him in 1964.

In 1965 Garfunkel’s land lady sent his demo tapes into the BBC and they later aired on the ‘Five To Ten’ morning show and gained recognition. Meanwhile Simon recorded his first solo album which was title ‘The Paul Simon Songbook’.

who created a remix of the song which made it to the top 100 and eventually reached number one on the charts. The song sold more than one million copies and promoted the duo to get back together after their label requested a new album which would be called ‘Sounds of Silence’. The album was recorded in only three weeks and released in 1966, it peaked at number 21. The single ‘Homeward Bound’ entered the charts and the song ‘I Am A Rock’ peaked at number three. The duo embarked on a nationwide tour; however they received criticism as they were viewed as a manufactured version of folk music.

The duo spent nine months working on their next album and released ‘Parsley, Sage, Rosemary and Thyme’ in October of 1966. The duo went on a college tour and recorded the song ‘A Hazy Shade of Winter’ which made it to number thirteen on the charts.

Simon struggled with writer’s block which prevented an album release in 1967 which worried the Columbia label executives who generally expected two to three albums per year from their artists. The duo performed on a number of show during the time, including The Ed Sullivan Show, The Mike Douglas Show and The Andy Williams Show.

In 1967 the duo also made the acquaintance of director Mike Nichols who enjoyed their music and asked them to provide the soundtrack for the film ‘The Graduate’.

The duo’s next album, ‘Bookends’ was recorded between 1966 and 1968 and took many hours to record. Before the release of the album the Simon & Garfunkel performed at the Monterey Pop Festival. Their album was released in 1968 only 24 hours before Martin Luther King Jr. was assassinated. The album reached number on and remained on the charts for 66 weeks and went on to become the duo’s highest selling album to date. During the 1969 Grammy Awards the song ‘Mrs. Robinson’ won Record of the Year.

The ‘Bookends’ album and ‘Graduate’ soundtrack catapulted the duo into mega stardom and Simon was regularly approached by producers to write soundtracks, which Simon turned down.

Garfunkel took up acting and appeared in the film ‘Catch-22’ as Captain Nately. The duo had begun to grow apart and Garfunkel’s filming commitments put a strain on their relationship. They made plans to collaborate after filming ended and embarked on a tour though the US which ended at Carnegie Hall. They released their album ‘Bridge Over Troubled Water’ in 1970, the album charts in more than 11 counties and top the charts in 10. It was the top selling album for three consecutive years and for a time was the best-selling album in history until Michael Jackson’s ‘Thriller’ broke the record. The lead single on the album reached number one and has been covered extensively by other artists. The duo embarked on a brief tour to support the album and won six awards at the 1971 Grammy Awards, including Album of the Year.

The recording of the album put a strain on the duo’s relationship and eventually lead to their break-up. The duo only spoke on rare occasions for several years afterwards. They reunited on several occasions however to perform. They first reconciled for a benefit concert at Madison Square Garden in New York before attending a recording session with John Lennon and Harry Nilsson. They produced one new song together which peaked at number nine and appeared on Saturday Night Live.

In 1981 the duo embarked on a reunion tour which attracted crowds of more than 500,000 people. The live album of the concert reached double platinum status.

Simon & Garfunkel embarked on an international tour together in 1993 but their relationship remained strained for the rest of the decade.

They again went on tour in 2003 and performed 40 dates, before commencing on a US leg in 2004. The duo ended their tour with a free concert in Rome which attracted a crowd of more than 600,000. The duo briefly reunited in 2009 and went on a reunion tour through Asia and Australia. In 2010 Garfunkel was diagnosed with vocal cord paresis and the remainder of the duo’s tour was cancelled, he recovered over the next four years.

Garfunkel expressed the hope that they would tour again, but Simon said that they didn’t get along and that touring ‘would never happen again’ before he announced he had retired from touring in 2018.