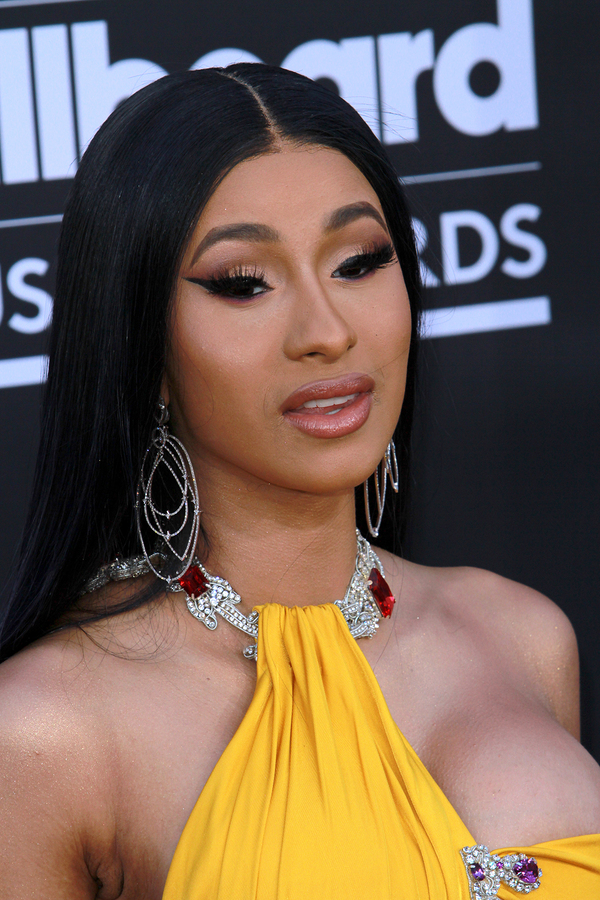 Cardi B (birth name Belcalis Marlenis Almánzar) is famous for being an American rapper, songwriter and television personality. She first rose to prominence as an internet celebrity after she went viral on Vine and Instagram. She then become a reality TV star and was featured on the show Love & Hip Hop: New York before she began pursuing her music career and was signed by Atlantic Records in 2017.

Since the start of her music career she has had three number one hits on the Billboard Hot 100. Her debut studio album was well received and won her a Grammy Award for the Best Rap Album. Cardi B has been recognised as one of the most influential rappers in history. She has won a number of awards since the beginning of her career including four American Music Awards, seven Billboard Music Awards, four BET Awards, five Guinness World Records amongst many others.

Cardi B was born on the 11th of October 1992 in Washington Heights, Manhattan. Cardi B’s father is Dominican whilst her mother was from Trinidad. She was raised in South Bronx and developed a thick accent due to the amount of time she spent with her grandmother. Her stage name came from Bacardi which was her nickname growing up. At 16 she joined the Bloods gang but says as an adult she wouldn’t encourage people to join. She attended Renaissance High School for Musical Theatre & Technology ad Herbert H. Lehman High School.

When she was a teenager she worked at an Amish Market and then she began stripping at the age of 19. She has said that stripping helped her to escape a bad situation and it helped her go to Borough of Manhattan Community College which she later dropped out. Around 2013 she began to gain popularity on the Vine and Instagram platforms with viral videos.

Cardi B took part in season six of the reality television show, Love & Hip Hop: New York which aired on VH1 in 2015. She was considered to be one of the stars of the show for season six and seven where he rise to fame and relationship with her fiancé was chronicled; her fiancé was in jail at the time of the show. In 2016 she announced her plans to leave the show to pursue her music career.

In later 2015 she made her debut on a remix of ‘Boom Boom’ by Shaggy. Her first music video was the following month with the song ‘Cheap Ass Weave’. In 2016 she released the mix tape ‘Gangsta Bitch Music Vol.1’ and was later featured on the compilation album ‘Underestimated: The Album’ which featured the song ‘What A Girl Likes’. She continued with her reality television appearance with guest appearances on both ‘Uncommon Sense With Charlemagne’ and ‘Khloe Kardashian’s Kocktails with Khloe’. She was also cast in the TV series ‘Being Mary Jane’. Cardi B got her first ever endorsement deal with a chain of lingerie stores known as Romantic Depot.

In 2017 she released her second mix tape ‘Gangsta Bitch Music Vol.2’, the following month she partnered with MAC cosmetics. In Feburary 2017 she signed a recording contract with Atlantic Records and opened for the hip hop group ‘The Lox’s Filthy America…It’s Beautiful’ she was joined by Lil’Kim and Remy Ma. A few months later Cardi B was nominated for two BET awards which included Best New Artist and Best Female Hip-Hop Artist she failed to win that year but performed at the after party.

Mid-2017 she released her debut single ‘Bodak Yellow’ which she sung on both the Wendy Williams Show and Jimmy Kimmel Live.

The song eventually reached number one on the Billboard charts, where it remained for three consecutive weeks. The song tied with Taylor Swift’s ‘Look What You Made Me Do’ for the longest time a female spent in the number one spot in 2017. Cardi B also became the first person in history to reach the Hot 100 who was of Dominican descent. The song was certified platinum and was nominated for a number of awards including Best Rap Song. She then went on to collaborate on the songs ‘No Limit’ and ‘Motorsport’ and headlined at the Powerhouse Music celebration in Brooklyn.

Cardi B went on to appear in the Bruno Mars video ‘Finesse’ which made her the first woman to have five top ten singles at the same time on the R&B and Hip Hop charts.

She released another single ‘Be Careful’ ahead of her album release in March 2018. She then came out with her debut album ‘Invasion Of Privacy’ which was well-received by critics. The album debuted at number one on the charts in the United States and it became the most streamed album on Apple Music (although Ariana Grande later broke this record). Cardi b performed on Saturday Night Live to promote her album and announced her pregnancy.

Her song ‘I Like It’ hit number one on the charts and her collaboration with Maroon 5, the song ‘Girls Like You’ also reached number one.

Her album was certified double platinum and all the songs on the album were certified gold or higher. In 2018 Cardi B received the highest number of nominations for the MTV Video Music Awards with 12 nominations and three awards wins.

Her songs ‘Money’ and ‘Taki Taki’ also entered the top 20 charts with Taki Taki doing well in a number of Hispanic countries. During the Grammy Awards she received five nominations and performed during the ceremony. She also hosted the 2019 Billboard Music Awards and received the most nominations in a year that any woman had ever received.

In 2019 she released a single with Bruno Mars titled ‘Please Me’ which became top ten. During the Houston Lovestock Show and Rodeo Cardi B attracted record attendance numbers with 75,580 fans showing up to watch her perform. Cardi B appeared for the first time on film in the movie Hustlers alongside Jennifer Lopez and Lili Reinhart. She also appeared as a judge on the Netflix TV series Rhythm + Flow. She is also set to appear in the film Fast & Furious 9.

Cardi B began dating the American rapper Offset in 2017, the couple got engaged in 2018 after the rapper proposed to Cardi B at the Wells Fargo Centre in Philadelphia. Cardi B revealed her pregnancy to the rapper on Saturday Night Live during a performance. In 2018 TMZ discovered that the couple has already secretly married in 2017. Mid-2018 Cardi B gave birth to her first child, a daughter whom the couple named Kulture Kiari Cephus however in December of that year Cardi B and Offset split. Cardi B has said tht in the past she was sexually assaulted and that she is bisexual.

Cardi B has a little sister, Hennessy Carolina whom also has a strong following on social media and sometimes joins her sister at industry events.

Cardi B was involved in a scuffle with Nicki Mina after she threw her shoe at the rapper during New York Fashion Week. She has also courted controversy over an Instagram video where she spoke about drugging and robbing men who came up to her hotel room for sex, she defended her actions saying it was necessary for her survival at the time.