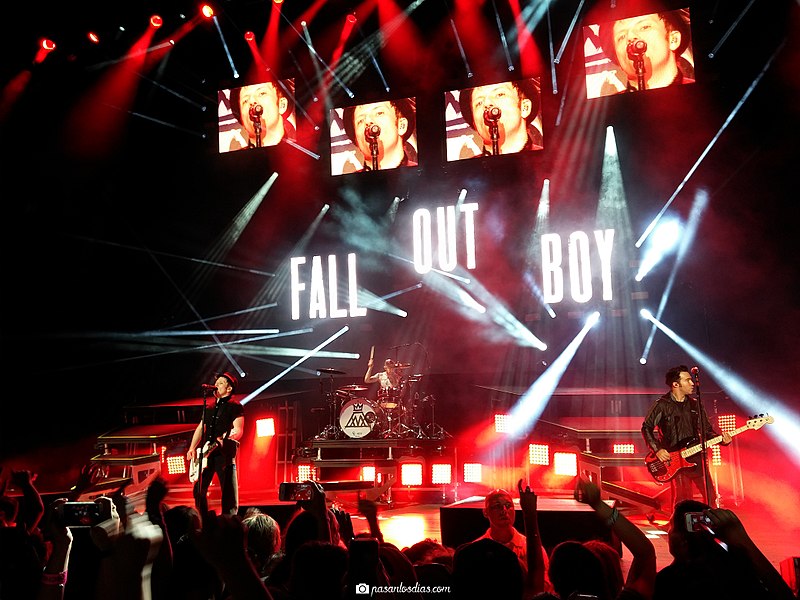 Fall Out Boy are famous for being an American rock band that first formed in Illinois in 2001. The band was formed by lead singer and rhythm guitarist Patrick Stump, bassist Pete Wentz, guitarist Je Trohman and drummer Andy Hurley. The band members were originally part of the hardcore punk scene and developed as a pop punk side project. The group recorded the debut album ‘Take This To Your Grave’ in 2003 – the album later became influential for many other pop punk bands in the future. The band have since had a number of platinum albums and won many awards including two Grammy nominations.

In 2001 the band was formed by Wentz who was known of the hardcore punk rock scene around Chicago in the 1990s and his friend Trohman. The band performed for the first time at DePaul University. The band struggled to settle on a name but eventually settled on ‘Fall Out Boy’ which was based on a character from The Simpsons. The band recorded their first demo tape in a basement but later recorded a proper studio demo in Wisconsin. Wentz began promoting the band through social media. The band Uprising wanted to release an album with the band, which required them to rush out a number of songs and release the record ‘Fall Out Boy’s Evening Out With Your Girlfriend’. The band was unhappy with the final product. The band toured for two weeks with the band Spitalfield.

The band began shopping around for record labels shortly after the tour and tried to join Drive-Thru Records who offered to sign them to the side label Rushmore, but the band declined. The band was looked at by The Militia Group and Victory Records and signed Bob MycLynn as their manager.

John Janick from Fueled By Ramen heard one of the bands songs and cold called the band, th band were offered money to sign with Fueled by Ramen. The band recorded an album with the help of Smart Studios. The band’s debut album was released in 2003; it gained the band considerable momentum. Interest in the band grew quickly and many of the ban’s show started to get out of control. The band joined Greenday’s Warped Tour in 2004 and managed impressive sales of their album thanks in part to the radio stations at Hot Topic playing their music.

The band was quickly deemed the next big thing following the release of their first album. Prior to the release of their second album the band released the acoustic EP ‘My Heart Will Always Be The B-Side To My Tongue’. Next the band released ‘From Under The Cork Tree’ which was recorded in California. The album was recorded much more slowly than their previous album; Wentz wrote most of the lyrics whilst Stump wrote the music. The band struggled to settle on a sound and scrapped much of their new material whilst developing their new album. A few weeks before they began recording the band scrapped ten of their songs and wrote eight new ones, including ‘Sugar, We’re Goin Down’ which went on to become a hit.

In 2005 Pete Wentz experience an emotional breakdown and attempted suicide. Wentz was struggling as the band was on the brink of major fame and overdosed in the parking lot of a Best Buy which resulted in him getting his stomach pumped. Wentz moved back in with his parents for a short time. The bands album went to number nine on the charts following its 2005 release. The album had two hit singles ‘Sugar We’re Goin Down’ and ‘Dance Dance’. The bands subsequent tour was highly successful and saw them performing in front of 10,000 strong crowds every night. The band’s album earned them a Grammy Award nomination. The album went multi-platinum and Wentz gained a lot of public attention after he talked about his suicide attempt, and nude photos of him surfaced online. He gained more attention when he started a relationship with Ashlee Simpson. The band headlined at the MTV Music Awards

in 2005 and played a number of tour dates alongside bands such as The All-American Rejects, Well-Known Secret, Hawethorne Heights and From First To Last.

The band returned to the studio and released their third album ‘Infinity on High’ in 2007.The album debuted at number one and sold 260,000 copies in its first week. The albums second single ‘This Ain’t a Scene, It’s An Arms Race’ reached number two on the charts. The albums third single ‘Thnks fr th Mmrs’ reached number 11 on the charts. The album went platinum and sold more than 2 million copies worldwide. Fall Out Boy toured with Cobra Starship, The Academy Is.., Gym Class Heroes, Plain White T’s and Cute Is What We Aim For. The tour was very successful and was followed with the live album ‘Live in Phoenix’. The band released a cover of ‘Beat It’ with John Mayer in 2008.

The recording on the bands next album was problematic due to conflict amongst the band members and the release of the album was complicated by changes to the music industry. To help promote the album the band used a creative viral campaign approach which drew influences from George Orwell’s novel ‘Ninteteen Eight-Four’. The album ‘Folie à Deux’ did not perform as well as the previous album but it still became the bands third top ten album. The album was certified platibum and spent two weeks in the top 20 on the US charts.

The band went on tour but discovered that fans would boo them for performing tracks from their new album. The band later released a greatest hits album before deciding to take a break from the music industry. The hiatus lasted two years for the band, by the time it commenced Stump was heavier than he had ever previously been and disliked the ‘emo’ image of the band. Drummer, Andy Hurley suffered from depression whilst Wentz began abusing prescription pills and underwent a divorce from his wife. Stump was the only member of the band to undertake a solo project and he lost a significant amount of weight during the hiatus. Stump ended up writing a blog post at a low point about his treatment during his tour for his solo record, where he talked about being labelled a ‘has-been’ at 27 and discussed how he was harassed by fans.

Wentz recorded with Bebe Rexha and wrote a novel, titled Gray he also appeared in the show ‘Best Ink’. Hurley continued to perform with rock band and formed the heavy metal band ‘The Damned Things’.

In 2012 Stump and Wentz got together for a writing session after Wentz reached out to Stump. They wrote several songs which were shelved but got the whole band together a few months later, deciding that they needed to represent the modern version of the band. After months of secret recordings the band announced the ‘Save Rock and Roll’ tour in 2013. The albums lead single ‘My Songs Know What You Did In The Dark (Light Em Up)’ peaked at number 13 on the charts and the album was certified 3x platinum.

The band released their next album ‘American Beauty/American Psycho’ in 2014 after the successful released of the track ‘Centuries’ which peaked at number ten on the Billboard charts. They also released the song ‘Immortals’ for the soundtrack of Big Hero 6 in 2014. In 2017 the band announced that they would be released an album titled ‘Mania’. The album included the singles ‘Champion’ and ‘The Last of The Real Ones’ which did well on the charts.

In 2018 the band released the EP ‘Llamania’ which included several demo recordings. More recently they announced that they would be embarking on the ‘Hella Mega Tour’ with Green Day and Weezer.