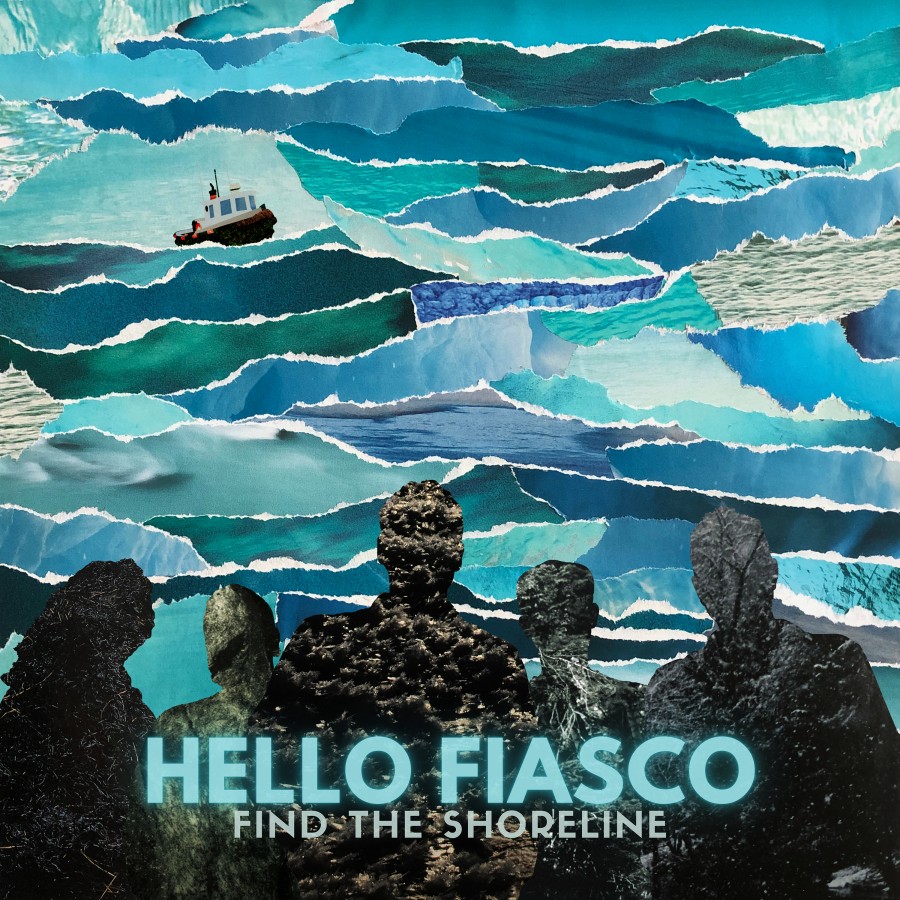 The debut release from emerging Canadian-American band Hello Fiasco, Find the Shoreline, builds upon a familiar pop-rock sensibility to create a solid, engaging, and masterfully produced 12-track collection. Bringing in elements of rock, pop punk, emo, and folk, this album will definitely appeal to fans of bands like Panic! at the Disco, Fall Out Boy, the All-American Rejects and The Killers. Vocalist Eric LaBossiere’s voice even feels somewhat reminiscent of Brendon Urie’s (Panic! at the Disco) while retaining its own unique and grounded quality. All five members of the band have contributed undeniable musical skill and passion to an album that can hold its own amidst the major releases from the genre.

Find the Shoreline is refreshingly dynamic, with songs ranging from mellow meditations to more raucous and danceable pop-rock hits like “Gorgeous Girl.”

Songs like “Hold Me Close” and “Trust” feel particularly reminiscent of early 2000s emo and pop punk, mastering the punchy yet emotional atmosphere so characteristic of the genre. “Trust” makes for a beautiful closer to the album, combining acoustic elements with LaBossiere’s strong yet emotive vocals. The song carries a great depth of feeling, which matches the intensity of the album’s closing lyrics—”it hurts too much/but still we stay and we revel in the pain.”

A few of the songs on the album—“Before Time Leaves You,” “Atlantis and Compatible,” “Words Are Fast”—even bring in elements of contemporary folk music, introducing cello, understated percussion, banjo, and acoustic guitar. “Atlantis and Compatible” is one of the standouts on the album, featuring the stunning vocals of Erin Propp, who sings both harmony and lead throughout the song, bringing in a bright and ethereal quality that perfectly complements LaBossiere’s deeper and grittier voice.

The lyrical content on the album is also notably more substantive than many modern pop albums. “Before Time Leaves You” is particularly insightful, offering the wise advice to “do the things you love to do/before time escapes you/before time leaves you.” Throughout the album’s 12 tracks, listener’s get the impression that the songwriters are navigating familiar territory—love, loss, a changing world—but in a way that sounds and feels unique. While Hello Fiasco are clearly influenced by a handful of genre-defining bands, they’ve been careful not to end up in a pigeonhole, and they’ve succeeded in diversifying their sound.

It’s worth noting that Find the Shoreline was co-produced by LaBossiere and award-winning producer John Paul Peters who has worked with the likes of Comeback Kid and Propagandhi and who contributed instrumentation on all 12 tracks of Hello Fiasco’s album. The album was also mastered by Grammy-winning engineer Randy Merrill of Sterling Sound who has worked with everyone from Harry Styles to Imagine Dragons to Maroon 5. The impeccable production team can certainly be heard and felt as you listen to the album.

For a fun, introspective, and engaging listen, check out Hello Fiasco’s debut album and be sure to keep up with the band as I can imagine this won’t be they’re last release.