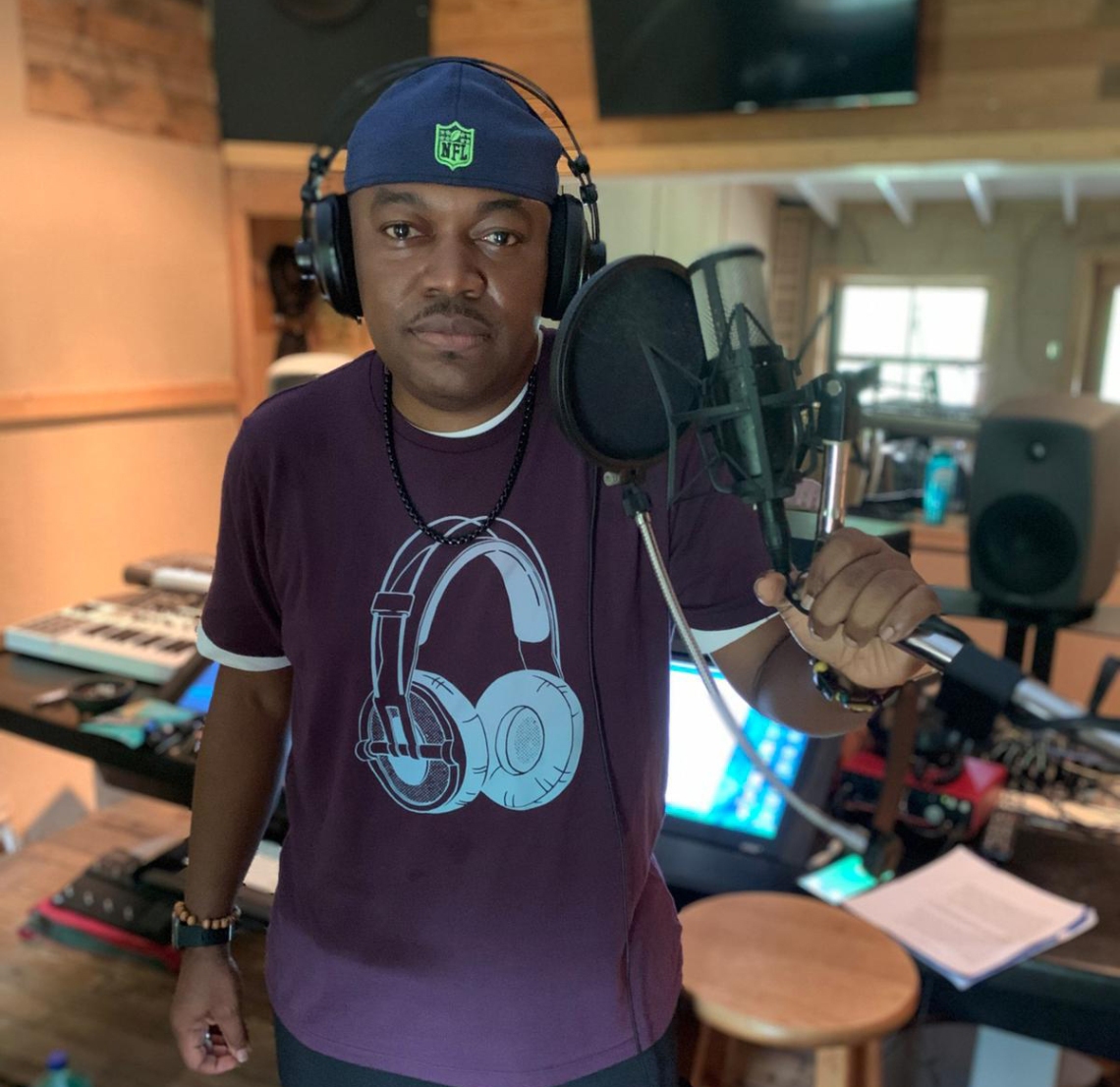 Ricardo Neeley is a Bahaman hip-hop artist who is best known by his professional name Noble Barz (formerly Barz Noble). Coming from a background of hardship, Ricardo knows the transcendent power of hope that spirituality can bring, and this is just one of the powerful messages he incorporates into his music.

Ricardo is a talented artist who has a masterful grasp of poetic rhyme, and he uses it to great effect in his music. He has 2 albums out (Symphonic Signatures and SCOAP: Soul Chapters of a Poetic) and often collaborates with other artists and producers.

Ricardo Neeley answered a few questions about his background, his music, and the important messages he wants to share with listeners.

Hi Ricardo, can you tell us about your upbringing before deciding to become a hip-hop artist?

I was born and raised in the Commonwealth of The Bahamas in particular from the Island of New Providence where Nassau is the current capital of the Bahamas Islands. As a youth, I came from humble beginnings growing up in a single-parent home with my Mom from an early age. I always had a love for music growing up. I remember on the weekends my household was filled with music, and there was nothing like a Saturday when my Mom would play on the home sound system her collection of records, tapes and later in the years, compact discs and listening to her favorite radio shows during house cleaning or cooking. It consisted of a collage of music whether it be from the likes of Quincy Jones, The Manhattans, Ray Goodman & Brown, Third World, Maxine Weldon, Anita Baker, The Winans, James Cleveland, Hillsong Worship and to our own Bahamian greats such as the T-Connection and Kenny & The Beach Boys just to name a few.

A kaleidoscope of music genre-wise was played in my home on any given Saturday from my living room ranging from oldies, country music, reggae, calypso, rake and scrape, pop, vintage R &B and both contemporary & older gospel or negro-spiritual theme music was the normal thing for me I enjoyed, and I believe from that point the love and a keen interest for music as a whole sparked from those moments growing up.

I was first introduced to hip-hop through overseas programmers such as the likes of Yo MTV Raps & B.E.T. Rap City The Basement from the United States and MUCH Music urban show from Canada respectively. I became a fan first of this newfound art of hip hop music and then transcended into becoming an actual creator and contributor as a hip-hop artist after hearing the likes of early Common, A Tribe Called Quest and Nas. The song “Respiration” by Blackstar birthed a desire to write rhymes and construct free-verses even before I learnt to properly structure them into songs, it’s a work in progress I always believe in the need to make room to continuously grow in my own lane in this hip-hop craft.

Where did the name ‘Noble Barz’ come from?

I actually went by the name Barz Noble which several persons both locally and abroad may still know me by whether through existing music videos, media publications and music alike but the name switched to Noble Barz due to a suggestion of legal representation that I had acquired recently to deal with some business matters in connection to my brand. Still, the purpose or intent of the two names that make up my moniker despite the name switch remains the same as mentioned in my biography under my Noble Barz website. The word ‘Noble’ involves the character or distinction that identifies the voice of content within the delivery by which I want to purposefully convey the message of hope and to inform with a relevant yet spiritual foundation and the word ‘Barz’ refers to the musical and artistic aspect that’s connected to the delivery.

How do you describe your style of hip-hop?

As mentioned on my music biography on the Noble Barz website, my style of hip-hop can be summed up as insightful poetics through the spoken word and rhyme over composed beats. I reflect back, though, in the days when I first got into recording what I was writing, I had a particular sound in mind.  I am still a big fan of that East Coast 90’s hip-hop boom-bap sound. Still, the more I got to record songs to tracks my appreciation just for the music on the whole where so many in a variety of elements whether that Island or that Inner City vibe or smooth and chill could all blend in the sonic texture within my body of work under my former moniker Barz Noble from my freshman L.P. the “Symphonic Signatures” to my last under Barz Noble moniker entitled  S.C.O.A.P. which means Soul Chapters Of A Poetic reflects that transition giving more space to evolve on future projects under my new moniker Noble Barz. I also have great respect for jazz so that soulful type arrangements in production in the music you can hear that particularly on the Soul Chapters of A Poetic album my readers can check out and listen to on available digital platforms at the Buy Music section on the Noble Barz webpage.

What are some of the messages you explore with your music?

The message of LIFE as a whole but cutting it into different slices as everybody may not be going through the same thing at the same time, but we all at one point or another will encounter a crossroad in life where something or someone is going to touch us whether in a big or small capacity that we all can relate to as human beings. I explore such topics with messages of hope with a consistent wholeness and touch lyrically on God, the virtues of love, social and spiritual issues, self-discovery & knowing your own identity & worth are constant themes that interwoven throughout my approach on a track in whichever topic, in particular, is being expressed. At times I may not necessarily be intentional in what I write but the feel or what such as myself from the Caribbean like to say it’s about ‘da vibe ‘that the inspiration can take to a direction that develops into something simple yet organic in the creative process that’s the lane I am on currently and see myself as a Creative known as Noble Barz.

Who are your favorite people that you like to collaborate with?

No one artist or more in particular even though I do have a healthy respect for quite a few who operate with skill within their artistry. My favorite people though I like to collaborate with are like-minded individuals when it comes to the creativity and who displays a level of integrity in the expression of their craft they don’t have to necessarily do hip-hop, and that’s the beauty of music in collaborations the coming together to create each involved maybe the different ingredients which are good in their respective genres, but when put together they can make a delicious dish in the pot as a part of a greater feast you get the gist of what I am saying.

How has C.O.V.I.D. impacted your work and lifestyle?

We are fighting against an invisible virus the impact has affected us all on so many levels as people from all walks of life I am grateful even more through these serious times not take life for granted on a personal, emotional and a spiritual level. Work-wise as a result of C.O.V.I.D. persons like myself who still have jobs are dealing with what is called the new normal which includes adjusted work schedules, social distancing, wearing a mask daily in public, practicing good protective hygiene habits to lessen chances in catching the virus & all of these things aforementioned that I like many around the Caribbean and the world we have to be aware & alert if we can help in not putting ourselves and love ones in unnecessary danger. On the music side, I have had more time to write and record amid this pandemic because, as a creative, I had to adjust and take advantage of the free time afforded to me.

What is your long-term aspiration or goal with your music?

To reaffirm and establish a higher level of thinking express through the means of lyrical edification is my paraphrase my motto, my mojo that I go by as Noble Barz the recording artist. I desire though as Ricardo Neeley to accomplish both in and out where it involves branching out in creating a publishing & audio hub where Creatives can come together & have the facilities to create & secure licensing opportunities whether locally or abroad and can still be there own artist & entrepreneurs respectively creating multiple streams of income. For me it’s always about the next generation so like the music pioneers and creatives who did it before but in the right way I want my music as long as I can inspire others to do them in whatever they were created to do it doesn’t have to be in the arts. Lastly, if it is something that I might of rhyme or say over a track that could ignite a spark in a listener to do better and rise above despite what may be trying to hold them down then my mission is accomplished.

Ricardo thank you for your time!