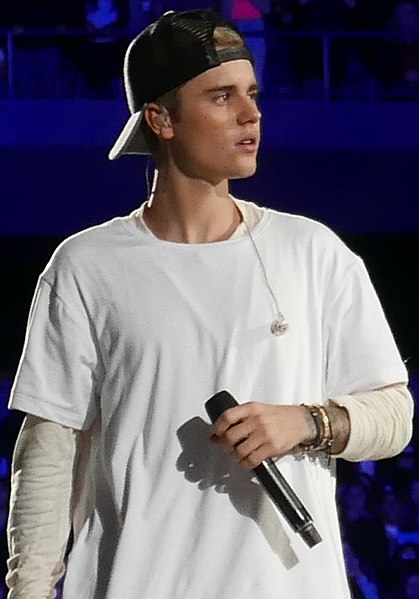 Justin Bieber is a famous Canadian singer, songwriter and actor. He was first discovered at only 13 years of age due to his popular YouTube channel which featured the singer covering popular songs. The channel was watched by talent manager Scooter Braun who helped the singer sign to RBMG Records in 2008. The singer quickly broke records with his first EP, ‘My World’ which was released in 2009 and led to Justin Bieber having seven songs chart on the Billboard Hot 100.

He went on to have a number of successful albums and hit singles but began to have a number of legal issues which eventually lead up to his first arrest in 2014. After he was accused of reckless driving and charged with vandalism, more than 270,000 people signed a petition to have him deported from the US – the Obama administration refused to comment even though the petition would have warranted a response under normal White House guidelines.

The singer is one of the best-selling artists in the world, having sold more than 105 million records in just the United States alone. He has received many accolades during his career including one Grammy Award, 15 American Music Awards, 20 Billboard Music Awards, one Latin Grammy Award, 21 MTV Europe Music Awards (a record number) and three MTV Music Awards.

Justin Bieber was discovered by Scooter Braun whilst he was searching for new talent on YouTube. The talent manager accidentally stumbled on Bieber after clicking on one of his videos in 2007. The manager was so impressed that he found the theatre that Bieber performed at, and eventually contacted his mother who was reluctant because of Scooter Braun’s Judaism. The family was devoutly Christian and she said that she had prayed for a Christian manager and label, but her Church convinced her to allow then 13 year old Bieber to go to Atlanta with Braun to record a demo. The following week the singer began singing for Usher and was signed to RBMG, which was a joint venture between Usher and Braun.

It was reported that there was a bidding war over the singer and that Justin Timberlake was also trying to sign him but he lost out to Usher. The singer was then signed tp Island Records in 2008 and he and his mother moved to Atlanta. The singer released his first single ‘One Time’ in 2008 whilst he was working on his first album. The song made it to the charts in both Canada and the United States, peaking at number 17 on the Hot 100. The song reached platinum certification in both Canada and the United States. The singer released his first extended play, called ‘My World’ in 2009. The EP featured the singles ‘One Less Lonely Girl’, ‘Love Me’ and ‘Favourite Girl’. The EP reached platinum certification in the US and 2x platinum in Canada and the UK.

The singer was given the opportunity to perform the song ‘Someday at Christmas’ in front of Barack Obama and Michelle Obama during the Christmas in Washington special that aired on TNT in 2009.

The singer appeared as a presented during the 52nd Grammy Awards ceremony in 2010 and also sung on the remake of ‘We Are The World’.

At the beginning of 2010 the singer released the single ‘Baby’ ahead of his upcoming debut album ‘My World 2.0’. The song became a huge hit internationally, peaking at number five in the US and number three in Canada. The singers album debuted at number one and made the singer the youngest male solo singer to reach the top of the charts since Stevie Wonder achieved the feat in 1963.

Mid-way through 2010 the singer began his first tour, the ‘My World Tour’ which began in Connecticut. Around the same time it was also reported that the singer was the most searched celebrity on Google. His music video for ‘Baby’ also beat out Lady Gaga’s ‘Bad Romance’ for the top spot as the most viewed video on YouTube ever (it also received the most dislikes).

It was noted that the singers voice had begun to deepen on his album because he was beginning to hit puberty.  He admitted to the media that he was working with a vocal coach and dealing with voice cracks. He also said that he can no longer hit some of the notes that he could when he recorded ‘Baby’ and that the key had to be lowered for his live performances. The singer made his debut acting performance in 2010 with a guest appearance on CSI: Crime Scene Investigation. The singer later performed a medley of a number of his hits life during the 2010 MTV Video Music Awards. In October of 2010 the singer released the acoustic album ‘My Worlds Acoustic’ alongside a new single ‘Pray’.

The following year a 3D film titled ‘Justin Bieber: Never Say Never’ was released. The movie topped the box office and performed better than the industry expected. The singer released a remix album which featured artists such as Miley Cyrus, Chris Brown and Kanye West. In late 2011 the singer released his second album, ‘Under the Mistletoe’ which included a number of Christmas themed singles. The album debuted at number one, with the first single ‘Mistletoe’ peaking at number one on the charts in the US.

The singer released the single ‘Boyfriend’ in 2012 ahead of the release of his third album, the song debuted in the number two spot on the Hot 100 charts. His second single for his new album was ‘As Long as You Love Me’, the song peaked at number six on the Hot 100.

His third album ‘Believe’ was released in 2010 and was a marked departure from his previous sound as it included more R&B and dance-pop influences. The album debuted at number one in the United States and in Canada. He embarked on a tour in September 2012 to promote the album and announced plans to release an acoustic version of the album in 2013.

Later that year Justin Bieber announced plans to release a new song every Monday during the ten week lead up to the release of his film ‘Justin Bieber’s Believe’. He went on to release, ‘Heartbreaker’, ‘All That Matters’, ‘Hold Tight’, ‘Recovery’, ‘Bad Day’, ‘All Bad’, ‘PYD’, ‘Roller Coaster’, ‘Change Me’ and ‘Confident’.

In 2015 the singer released the song ‘Where Are U Now’, the song went on to win an award during the 2016 Grammy Awards. The singer then released the second single for his upcoming album, titled ‘Sorry’. The song peaked at number one on the charts, as did his next release ‘Love Yourself’.

His next album, ‘Purpose’ was released in 2015 and debuted on top of the Billboard 200 charts and went on to become the singers sixth albums to debut at the top of the charts. The singer began his worldwide tour to promote the album in Washington in 2016 but cancelled the latter half of the tour in 2017.

In 2016 the singer released the song ‘Let Me Love You’ with DJ Snake and the song ‘Déjà vu’ with Post Malone.

The singer collaborated with a number of other artists throughout 2017, including Luis Fonsi and Daddy Yankee. He also worked with Khaled on his single ‘I’m the One’ and David Guetta on ‘2U’.

In 2019 the singer announced a hiatus from music on Instagram but later came out to announce an upcoming album during the Coachella festival.

In May 2019 the singer released the song ‘I Don’t Care’ with Ed Sheeran. Bieber confirmed his new studio album would be released in 2020 and he released the album’s first single, ‘Yummy’.