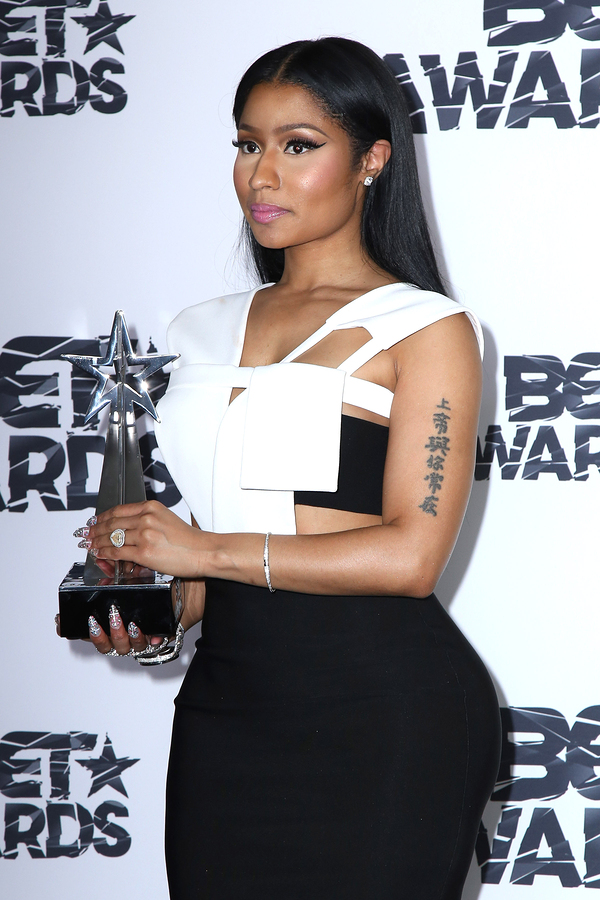 Nicki Minaj’s full name is Onika Tanya Maraj-Petty, she is famous for being a rapper, singer, songwriter, actress and model. Nicki Minaj has gained a lot of attention for her colourful style which includes elaborate costumes and wigs. She is also very well-known for her unusual rapping style which includes alter egos, different accents and a fast flow.

She has topped lists as one of the most influential people in the world and has had singles make it onto the Billboard Hot 100 on numerous occasions. Nicki Minaj is often called the ‘Queen of Rap’ and has won numerous accolades over the course of her career including six American Music Awards, eleven BET Awards, four MTV Video Music Awards, four Billboard Music Awards and ten Grammy Awards. She has sold more than 5 million albums worldwide and is one of the best-selling music artists in the world.

Nicki Minaj was born in Saint James, Port of Spain, Trinidad and Tobago. She is the daughter of Robert Maraj, a financial executive and gospel singer of Dougla descent and Carol Maraj a gospel singer. Nicki Minaj’s father was an alcohol and substance abuser with a temper, he burned their family home down in 1987.

The rapper also has an older brother Jelani and an older sister Maya, a younger brother Micaiah and a sister Ming. Minaj moved to The Bronx with her mother at the age of five. Minak attended LaGuardia High School of Music & Art and Performing Arts. She was cast in the off-Broadway play ‘In Case You Forgot’ in 2001.

Whilst struggling to get her acting career to take off as a teenager she worked for Red Lobster but was fired for being rude to customers.

In 2004 Nicki Minaj briefly joined the group, Full Force and recorded the entrance song for WWE Diva Victoria. She left the group and starting uploading songs to her myspace and was signed in 2007 to the label Dirty Money Entertainment. Her first mixtape was released in 2007 and her second was released in 2008.

Her third mixtape, ‘Beam Me Up Scotty’ was released in 2009 and one of the tracks reached number twenty on the rap charts. She was then discovered by Lil Wayne and signed a contract with Young Money Entertainment. She was featured on a number of songs including ‘5 Star Bitch’, ‘BedRock’ and ‘Roger That’.

In 2010 she released a number of singles, including ‘Your Love’ which peaked at number 14 on the Billboard charts. She released her album ‘Pink Friday’ on the 19th November 2010. The album debuted at number two and received positive reviews. The album got certified as platinum.

The song ‘Super Bass’ the fifth single on her album was released in 2011 and became a commercial success, peaking at number three on the charts and getting certified platinum. In 2011 she performed as one of the opening acts in the Femme Fatale Tour.

She released the song ‘Starships’ in 2012, as the leas single on the album ‘Pink Friday: Roman Reloaded’. The song became the fifth best-selling single of the year, but the cross-over into pop music was not well received by everyone.

The album was released in April 2012 and debuted at number one. She performed at the 2012 Superbowl show alongside M.I.A and Madonaa and became the first female solo rapper to perform at the Grammy Awards in the same year where she debuted the song ‘Roman Holiday’ in an exorcism themed performance which courted controversy.

Nicki Minaj began her Pink Friday Tour in 2012 and followed it up with the Pink Friday: Reloaded Tour. She provided her voice to the film Ice Age: Continental Drift in 2012 and released an expanded version of her album called ‘The Re-Up’ in November of 2012. In the same year she appeared on the twelfth season of American Idol and appeared in a Mac cosmetics campaign. She made her first live-action film appearance in ‘The Other Woman’ in 2013 which premiered in 2014. She released the song ‘Pills n Potions’ in 2014, which was followed up by ‘Anaconda’ which premiered in the number two spot on the Billboard Hot 100. She released her album ‘The Pinkprint’ and embarked on the the album tour in 2015.

In 2017 she released the singled ‘No Frauds’, ‘Chnaged It’ and ‘Regret In Your Tears;’ at the same time. Her fourth album ‘Queen’ was released in 2018. The lead single ‘Chun-Li’ was released and debuted at number ten on the Billboard Top 100. The singles ‘Rich Sex’ with Lil Wayne and ‘Bed’ with Ariana Grande were also released. The album was released in August 2018 and debuted at number two on the charts. The album did not make it to number one and Nicki Minaj expressed her annoyance in tweets to Travis Scott whose album blocked her from the top spot. More recently she has offer her voice to The Angry Birds Movie 2 and performed at the Cooachella Valley Music and Arts Festival alongside Ariana Grande. In June 2019 she released the song ‘Megatron’ and appeared on Jimmy Fallon.

Nicki Minaj was with her long-time boyfriend Safaree Samuels between 2000 and 2014. It’s believed by fans that a number of songs in The Pinkprint were about the end of their relationship. She started dating the rapper Meek Mill in 2015; however the couple broke up in 2017. In 2018 she began dating Kenneth Petty, a friend from childhood. The couple files for a marriage license in 2019 and announced their marriage in October.

Nicki Minaj has in the past described herself as bi-sexual but clarified that she hasn’t dated girls but finds women attractive. She has also talked about having an abortion in the lyrics of one of her songs and said that it was a difficult decision but not one that she regrets.

Over the course of her career Nicki Minaj has been involved in a number of feuds and controversies. She received criticism for her choice to collaborate with 6ix9ine who plead guild to posting explicit videos of a 13 year old in 2015. She was criticised by Azalea Banks and many fans who pointed out how problematic the normalisation of predatory behaviour is. The rapper was also involved in a disagreement with Remy Ma and the artists have both released a number of diss tracks or made comments about each other in the media over the years.

She has also had a feud with Lil’ Kim who accused her of copying her image. She also has had public disagreements with Mariah Carey even though they worked on the 2010 song ‘Up Out Of My Face’ together. The two began to feud during the twelfth season of American Idol. The two got into an argument during the auditions in Charlotte, North Carolina.

She was also involved in a scuffle with Cardi B who threw a shoe at her and tried to fight her. Minaj called the fight humiliating, it was reportedly because Minaj had liked posts about Cardi B’s lack of mothering ability although she denied those claims and said that she hadn’t.