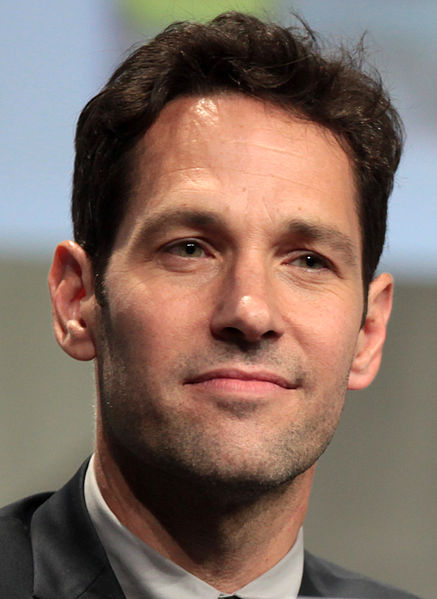 What is Paul Rudd’s full name?

Paul Rudd’s full name is Paul Stephen Rudd, unlike many other celebrities he chooses to go by his birth name rather than a stage name. The last name of his family was originally Rudnitsky, but it was changed by his Grandfather.

What is Paul Rudd’s age?

Paul Rudd is 50 years old, he was born on the 6th April, 1969. Media commentators frequently point out that he has barely aged since he first began appearing in TV and film roles. He is famous for being baby-faced and looking very youthful for his age. He is regularly seen in roles where he plays the ‘man-child’.

Who is Paul Rudd’s family?

Paul Rudd’s father, Michael Rudd was a historical tour guide and the former vice-president of Trans World Airlines, he passed away in 2008. His mother was Gloria Irene (nee Granville), a sales manager at the television station KCMO-TV in Kansas City. Both of his parents were originally from London.

Where did Paul Rudd go to school?

Rudd’s family moved to Lenexa, Kansas when he was 10 years old. Paul Rudd also spent several years living in Anaheim, California. Rudd went to Broadmoor Junior High before graduating from Shawnee Mission High School in 1987. He went to the University of Kansas and majored in theatre. He later studied at the American Academy of Dramatic Arts.

Where does Paul Rudd live?

Chris Rudd currently lives in an apartment in the West Village, an area of New York where the median sales prices in $1.9 million. His home is a classic style red brick apartment, although not much is known about his interior decorating style and what the inside of the apartment looks like. He has resided in West Village for many years.

What is Paul Rudd’s height and weight?

Paul Rudd is about 5 feet 9 inches tall, or around 175 cm and around 78kg’s. He is not an overly muscular actor and usually plays loveable, everyman roles. He often plays the dad and sometimes has a bit of a dad bod, although he is usually relatively thin. Occasionally he is pictured between movie roles with a bit of extra weight, likely because he is not working out regularly for a particular role.

What nationality is Paul Rudd?

Paul Rudd was born in New Jersey and is an American, his parents both met and lived in London prior to his birth however. He is descended from the Ashkenazi Jewish Immigrants who moved to England from Belarus, Poland and Russia. His father’s original surname was Rudnitsky whilst his mother’s was Goldstein.

Paul Rudd has stated that he did not grow up religious, but despite this he grew up with Jewish cultural influences. His family was pro-Israel and there was often a Hitler documentary on in his home. He is not a practicing Jew as an adult but enjoys the traditions and had his or Bar Mitvah as a child.

What is Paul Rudd famous for?

Paul Rudd is famous for being an American actor comedian, screenwriter and producer. He has been working in the entertainment industry for many years and is a very well-known and well-respected actor. His career has taken an upturn in recent years with his role in the Marvel movie franchise, Ant Man. He is also famous for his roles in cult-hits Clueless, Wet Hot American Summer and more. He has also appeared on a number of Broadway productions.

How did Paul Rudd’s career start?

Paul Rudd’s acting debut was in the 1992 television show, Sisters. He later appeared in Wild Oats over a six episode arc. He later left Sisters to take on a role in Clueless alongside Alicia Silverstone. He then appeared in Halloween: The Curse of Michael Myers, William Shakespeare’s Romeo + Juliet, The Locusts, Overnight Delivery, The Cider House Rules and 200 Cigarettes. He then played an FBI agent in Gen-Y Cops before being case on the sitcom Friends. He also appeared in Reno911! And Veronica Mars.

What was Paul Rudd’s breakthrough role?

By 2004, Rudd was already a well-known face around Hollywood; the year was the start of his relationship with director Judd Apatow whom he first worked with on Anchorman: The Legend of Ro Burgundy. He worked with him again in 2005’s, The 40 Year Old Virgin and then again in Knocked Up. He also appeared in Forgetting Sarah Marshall, Year One, Bridesmaids, Wanderlust and the Anchorman sequel. Other notable movies include, I Love You Man and Dinner for Schmucks. Paul Rudd quickly established himself a reputation in off-beat comedy films playing the loveable schmuck. His career and reputation have experienced fluctuations, whilst many of his recent films have been critical successes; his performances have not always received positive reviews.

What has Paul Rudd done since his breakthrough role?

More recently Paul Rudd has starred in the Ant-Man films, reprised his role in Wet Hot American Summer and appeared in The Fundamentals of Caring, Sausage Party and The Little Prince. He has also appeared in the comedy series Living With Yourself. Paul Rudd’s profile has risen a lot in recent years thanks to his role as Ant-Man, Captain America: Civil War and The Avengers.

What is Paul Rudd’s net worth?

Paul Rudd is currently estimated to be worth $70 million. Paul Rudd makes his money from his acting, screenwriting and producing credits. He reportedly earning $41 million in 2019 and made the Forbes list as one of the highest paid actors of the year.

Who has Paul Rudd married?

Paul Rudd married his girlfriend of five years, Julie Yaeger in 2003. He met his wife shortly after he finished filming Clueless in his publicist’s office, where she was employed at the time. He and his wife have had a very steady relationship ever since and remain married. They have been together for more than 25 years and have kept their relationship very private during that time. Paul Rudd has said that he won’t sell out tabloids any time soon, since he and his wife have been happily married for 16 years.

Who has Paul Rudd dated?

Paul Rudd has been married for most of his career but he did briefly date Jennifer Aniston 1998 whilst filming The Object of My Affection. He was later cast on Friends alongside Aniston whom played Rachel Green. Things were said to be not awkward between the two, who have worked together on several occasions since they first worked together.

Does Paul Rudd have children?

Paul Rudd and his wife have two children, a son Jack Sullivan (born in 2004) and a daughter, Darby (born in 2009). Paul Rudd says that his son was unimpressed with his role as Ant-Man although he did later come around and admit that his dad’s role was pretty cool. His daughter is a big fan of her dad’s role and draws lots of pictures of Ant-Man.