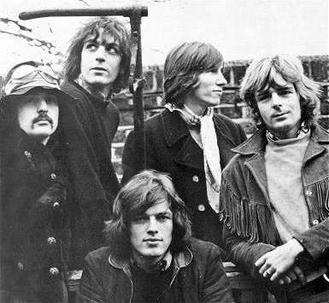 Pink Floyd is famous for being an English rock band first formed in London in 1965. They first gained recognition for their psychedelic rock sound which was distinguished by the bands extended compositions, experimental techniques and philosophical lyrics. The band is also well-known for their elaborate live performances. Over the course of their career Pink Floyd emerged as the leaders of the progressive rock genre and rose to become one of the most commercially successful band in history. The band is also highly influential and has often been credited as the inspiration for other bands and their sound.

The band formed after Roger Waters and Nick Mason met whilst study ing architecture at London Polytechnic and began playing music together with Keith Noble, Clive Metcalfe and his sister Sheilagh. Richard Wright also joined the group later that year and the group began going by the name Sigma 6. The band began performing at private functions and rehearsing in the basement of the Regent Street Polytechnic. Waters and Mason moved in together, after Mason moved out guitarist Bob Klose moved in.

The name of the band changed a number of times before the band settled on the Tea Set. A number of members came and went until Klose introduced the band to singer Chris Dennis. The band secured their first recording time at a studio in West Hampstead. Barrett became the bands frontman after Dennis was sent to Bahrain in 1965. Klose quit the band in 1965 and Barrett took over on guitar, shortly after the band started calling themselves Pink Floyd Sound.

The band started to receive paid booking in 1966 and performed at the Marquee Club where a lecturer Peter Jenner noticed them. Jenner with his partner Andrew King became the bands manager and purchases new equipment for the band. Around this time the band dropped the ‘Sound’ from their name and became simply ‘Pink Floyd’. The band quickly became part of the underground music scene and known for their psychedelic shows. The bands went into partnership with Blackhill Enterprises in 1966, with each member of the band owning a one-sixth share of the company.

By 1967 the band were attracting buzz from the music industry and they were signed to the label EMI. Their first single ‘Arnold Lane’ was released in 1967, the references to cross-dressing in the song meant that a number of radio stations refused to play it but the song peaked at number twenty thanks to manipulation of the sales figures by a number of retailers. The bands second single ‘See Emily Play’ peaked at number six.

Pink Floyd’s first album ‘The Piper at the Gates of Dawn’ was released in 1967. The album peaked at number six. The band were drawing large crowds but Barrett suffered from a mental breakdown that forced the band to cancel an appearance at the National Blues and Jazz festival and several other appearances.

The band were forced to add a fifth member to the line-up, David Gilmour due to Barrett’s depression and intended for Barrett to be a non-performing songwriter. Barrett proved to be difficult to work with however and he was asked to leave the band.

In 1968 the band began recording the second album ‘A Saucerful of Secrets’.  The album peaked at number 9 on the UK charts.

The album that Pink Floyd is best known for, ‘The Dark Side of the Moon’ was recorded between 1972 and 1973. The album was released in 1973 and received positive reviews from critics. The album became one of the most commercially successful albums in history, reaching number one in the United States and remaining on the charts for fourteen years. The album became the third best-selling album in the worlds and made the bands members enormously wealthy.

Following the bands tour for ‘Dark Side of the Moon’, Pink Floyd began work on their ninth album ‘Wish You Were Here’. Released in 1975 the album peaked at number one in the UK and the US.

The band released their album ‘Animals’ inspired by the short novel Animal Farm in 1977. The album peaked at number two in the UK and number three in the US.

The band began recording their album ‘The Wall’ in 1978 and released it in 1978, the lbum topped the charts in the US and reached number three on the UK charts. The album spawned  film titled ‘Pink Floyd – The Wall’ which premiered in 1982.

The band released their album ‘The Final Cut’ which went to number one in the UK and peaked at number six in the United States and went on hiatus. Whilst Waters began pursuing solo projects and insisted the and would not reunite, the bands labels let them known they would be in breach of their contract if they did not record new music. After Waters departure from the band they began seeking new musicians for ‘A Momentary Lapse of Reason’. The album was released in 1987 and went to number three in the UK and the US.

The band released their next album ‘The Division Bell’ in 1994, the album reached the top spot on the charts in the UK and the US.

In 2005 Waters, Gilmour, Mason and Wright performed together as Pink Floyd, it was the line-up’s first performance together in more than 24 years. After their Live 8 performance the band turned down a lucrative contract for a final tour but did not rule out future performances.

In 2011 the band began a re-release campaign titled ‘Pink Floyd Why…?’ which included a number of remastered version of their back catalogue. In 2015 the band released an EP titled ‘1965: Their First Recordings’.

In 2014 the band released a new album titled ‘The Endless River’, the album went to number one and broke records as the most pre-ordered album in history. The band released a boxset in 2016 titled ‘The Early Years 1965-1972’ which included a number of outtakes, living recordings, tracks and films from the beginning of the bands career. In 2019 they released ‘The Later Years’ which included examples of the bands work following Waters’ departure from the band. The compilation album included a remixed version of ‘A Momentary Lapse of Reason’.

In 2018 band member Nick Mason announced that he has formed his own band and that he would perform some of Pink Floyd’s early career material.