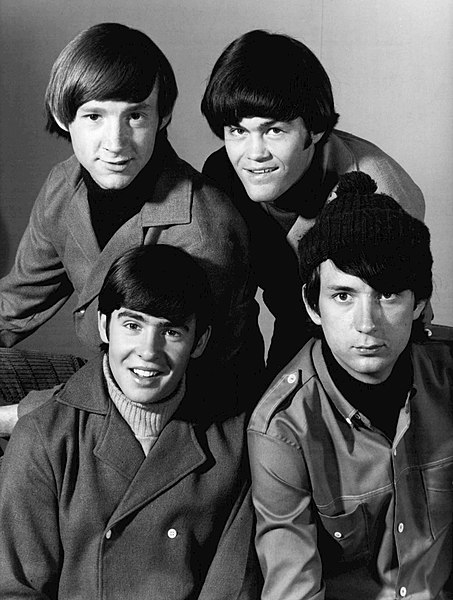 The Monkees are famous for being an American pop-rock band that was originally formed in 1966 and active until 1971. The original line up of the band included Micky Dolenz, Michael Nesmith, Peter Tork and Davy Jones. The group was created by television executives Bob Rafelson and Bert Schneider who created the comedy television series ‘The Monkees’ which aired between 1966 and 1968.

The actors/musicians in The Monkees initially had very limited involvement in their own musical output but gained more creative control after fighting for the right to supervise any musical output put out in the name of the band. After the show was cancelled the band continued to produce music until they broke up in 1971. A wave of nostalgia and renewed interest in The Monkees in the 1980s led to a reunion and a number of tours with different line0ups. Original members Jones and Tork have now passed away. The band became one of the most popular acts of the 1960s and has sold more than 75 million records in their career.

Inspired by the success of the Beatles, TV producers Bob Rafelson and Bert Schneider came up with the idea of the sit-com ‘The Monkees’ which they sold to Screen Gems Television in 1965. Davy Jones was the first member cast after he was signed to a long term contract with Screen Gems. A casting call was sent out to find the remaining members of the band and 437 applicants responded. The three cast members chosen were Michael Nesmith, Peter Tork and Michael Dolenz. When the show was picked up to series The Monkees began to rehearse but it was clear they would need help and Don Kirshner was brought in as a producer. After the release of the band’s first album he was forcibly dismissed and the band began to take more control over their own music.

The band released their first song ‘Last Train to Clarksville’ in 1966 a few weeks before the television show began and their first album was released a month later. It went to number one and remained in the top spot for 13 weeks.

When assigning instruments difficulties arose when choose who would play drums, Jones knew how but producers felt he was too short for the instrument and instead Dolenz was assigned to drums even though he didn’t know how to play. He was taught a few beats to help him get through the pilot and then he had to pick it up properly.

The success of the television series and music created pressure for a tour. The band made their debut live performance in 1966. They did not have time to prepare due to their filming schedule on the TV show.

The bands second album, ‘More of the Monkees’ was well received. The track ‘I’m a Believer’ was the bands top selling hit and stayed in the top spot for more than 18 weeks. The album was the third highest selling album of the 1960s and made a return to the charts two decades later.

The songwriters for the band, Boyce and Hart considered the band to be their own work whilst the musicians were simply actors although The Monkees were upset that they were not allowed to play their own instruments or use more of their own material and were only asked to provide vocals. They complained to the producers who eventually let them be more involved in the recording process. The band eventually removed Kirshner after an argument at a Beverly Hills hotel.

The band replaced Kirshner with Douglas Farthing Hatelid and together they produced the album ‘Headquarters’ and ‘Pisces, Aquarius, Capricorn & Jones Ltd’ which became the soundtrack for the second season of the show.

Headquarters became the bands third number one album. Following the release of their fourth album ‘Pisces, Aquarius, Capricorn & Jones Ltd’ which also went to number one the band returned to making music for the television show and brought in session musicians for their recordings. The bands next album ‘The Birds, The Bees & The Monkees’ went to number three and was the first album to be released after it was announced that the TV show would not be renewed.

The Monkees TV series was cancelled in 1968, a Monkees feature film ‘Head’ was subsequently produced. The movie was not a commercial success and it only played briefly in theatres. The soundtrack for the film made it to number 45 on the charts. In 1969 Peter Tork left the group saying that h was exhausted. The band released their seventh album ‘Instant Replay’ in 1969; it peaked at number 32 on the charts. Their eighth album ‘The Monkees Present’ peaked at number 100. The band went on tour but the interest in the act had died and The Monkees had to cancel a number of appearances due to poor ticket sales. The ninth album, ‘Changes’ was poorly received by critics and marked the last album by the band in their original incarnation.

Renewed interest in the band in the late 70s due to repeats of the show saw Dolenz and Jones reunite to perform past hits by the band. In 1986 a marathon of the TV series was broadcast and a number of members got together for a 20th anniversary tour. The reunion of the band saw many of their previous hits return to the charts and they released the compilation album ‘Then & Now…The Best Of The Monkees’.

In 1987 a new television series, the ‘New Monkees’ was broadcast but only remained on the air for 13 episodes. The band recorded new material in the 1990s and released their eleventh album ‘Justus’ in 1996. The band reunited in the same year for a 30th anniversary tour.

In 1997 Tork, Jones and Dolenz toured throughout the United States before they went on hiatus in 2001. Tork was fired and months of public bickering between the band members took place. Tork said that he was trouble by Dolenz and Jones’s drinking backstage.

Jones and Dolenz continued to tour in 2002 before splitting to concentrate on their own solo work. The group did not reunite for their 40th anniversary. In 2011 the group began a 45th anniversary tour but cancelled the final planned dates because of internal group issues.

Jones passed away from a heart attack in 2012 and soon after Nesmith re-joined the band for a brief tour in the US. The band toured throughout 2013, 2014 and 2015 and released a new album, ‘Good Times’ in 2016, the album reach number 14 on the charts. The band continued touring throughout 2016 to celebrate their 60th anniversary.

In 2018 Nesmith and Micky toured as a duo under the Monkees banner, Tork declined to participate. The tour was cut short due to a health issue that Nesmith was suffering from. In 2018 the band released a Christmas album called ‘Christmas Party’ which included vocals from Davy Jones. Tork passed away from cancer in 2019. A follow up tour for the Mike and Micky show with the duo of Dolenz and Nesmith is due to take place in early 2020.