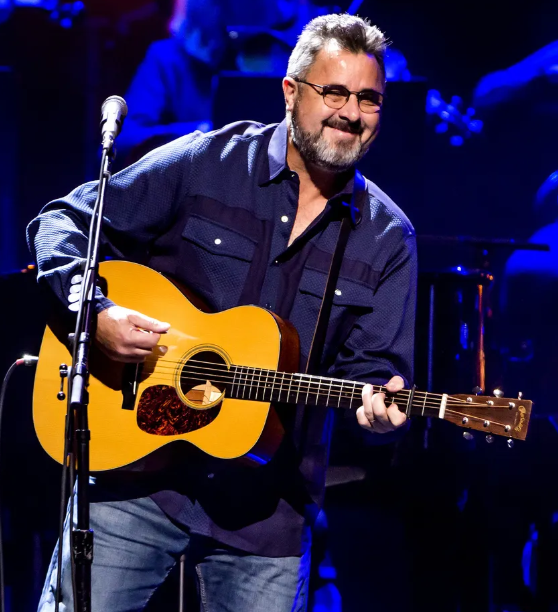 The famous country singer’s full name is Vincent Grant Gill, he goes by the shortened ‘Vince’ in his professional career.

Vince Gill is the son of J. Stanley Gill, a lawyer and administrative law judge who played in a country band in his spare time, he was active in encouraging Gill to pursue a musical career. His father encouraged him to learn instruments like the banjo, guitar, bass, mandolin, Dobro and fiddle. His mother had another son from a previous marriage, Bob Coen, although they were half-brothers, Vince Gill considered them to be full-brothers.

Gill went to high school at Oklahoma City’s Northwest Classen High School where he performed with the band Mountain Smoke which built up a strong local fan base. When he graduated high school in 1975 he moved to Louisville, Kentucky and joined the band The Bluegrass Alliance. He also spent some time in Ricky Skagg’s Boone Creej band before later moving to LA and joining the bluegrass group Sundance which was fronted by Byron Berline.

Vince Gill lives with Amy Grant in a Nashville home. He also owns a large estate in Brentwood, Texas.

Vince Gill is approximately 190 cm tall and weighs around 93 kgs.

Vince Gill is famous for being a country singer, songwriter, and multi-instrumentalist. He initially achieved fame and recognition as the frontman of the country-rock band Pure Prairie League and later started a successful solo career. He has won more Country Music Awards than anyone else in the country music industry. He has recorded over 20 studio albums and had more than 40 singles chart on the US country Billboard chart. He has sold more than 26 million albums. In addition to the 18 CMA Awards that he had earned over the course of his career, he has also been awarded 21 Grammy Awards and in 2007 was inducted into the Country Music Hall of Fame.

The singer began his professional career with the country-rock band Pure Prairie League in 1979. He was once invited to join the band the Dire Straits but he declined the offer. In 1981 he left Pure Prairie League to join the Cherry Bombs, the backing band for Rodney Cromwell. He recorded a bluegrass album called ‘Here Today’ before signing a deal with the label RCA. He achieved some success with singles such ‘Victim of Life’s Circumstance’, ‘If It Weren’t For Him’, ‘Oklahoma Borderline’ and ‘Cinderella’.

In 1989 he left RCA to join MCA Records and sold over a million copies of his debut album for the album which as titled ‘When I Call Your Name’. On the album, several songs made it into the top ten of the US country charts. His next album ‘Pocket Full of Gold’ was released in 1991, the single ‘I still believe in you’ went to number one on the US country chart.

For the remainder of the 1990s and into the early 2000s the singer continued to release highly successful albums which capitalized on the soulful tenor of his voice. Gill became a member of the Grand Ole Opry in August 1991 and celebrated his 25th anniversary with a tribute show on the 13th of August 2016. In 2010 the singer joined the country swing group ‘The Time Jumpers’. In 2011 he appeared on an NPR quiz show called ‘Wait, Wait…Don’t Tell Me’.

In May 2011 Gill introduced Carrie Underwood at the Academy of Country Music ‘Girls Night Out: Superstar Women of Country’ special. Carrie was one of the seven women being honoured during the special. Gill has a performance of one of her hits, ‘Jesus Take The Wheel’ and did a duet with Carrie Underwood on the song ‘How Great Thou Art’, a video of the performance went viral in just a couple of days.

In 2012 Gill announced that he did not have a record deal for the first time in twelve years. He gave a performance at the Kentucky Performance Arts Centre in Bowling Green, Kentucky. The performance was at short notice after LeAnne Rimes canceled, he drove up from Nashville and performed with only his guitar to standing ovations.

In April 2012 the country singer confirmed he was working with Bonnie Tyler on a duet titled ‘What You Need From Me’. Throughout the month of June 2012, he toured and performed bluegrass songs. In September 2012 he was the recipient of a star on the Hollywood Walk of Fame. The following month he was featured on a Kelly Clarkson song called ‘Don’t Rush’ which appeared on her Greatest Hits album, the song was certified Gold and sold more than 500,000 copies by October 2013.

The country singer was awarded the Irving Waugh award for excellence in country music in 2014 at the annual CMA Awards. It was only the fourth time the award had been granted since its inception in 1983.

In 2016, the country singer was selected to perform on ‘Forever Country’ a celebration of 50 years of the CMA awards. Over the course of his career, the country singer has sold more than 26 million albums and put out more than 50 top 40 hit songs. In 2017 he joined the Eagles on tour and sung the lead vocals that were previously sung by Glenn Frey, he has continued to tour with the band ever since.

Vince Gill has an estimated net worth of $30 million, thanks to his solo career and successful album sales as well as music sales from his time with Bluegrass bands and touring efforts with the Eagles.

The country singer previously dated fellow singer Janis Oliver from Sweethearts of the Rodeo, early on in his career when he was living in LA. The pair got married in 1980 and has a daughter, Jenny in 1982. In 1983 they made the move to Nashville where Gill worked as a session guitarist, sang back-up and wrote songs whilst his wife’s career grew. They were divorced in 1997.

In 1993 he met Amy Grant, a Christian music singer. He asked her to perform on a Christmas television special and the pair became friends. Both were at the time struggling with troubled marriages. Amy and her then-husband Gary Chapman filed for divorce in 1999 and Gill and Gran began to publicly see each other a few months later. In 2000 they got married, they later had a daughter together named Corrina. Amy Grant and Vince Gill currently live together in Nashville and are going strong 20 years after getting married.