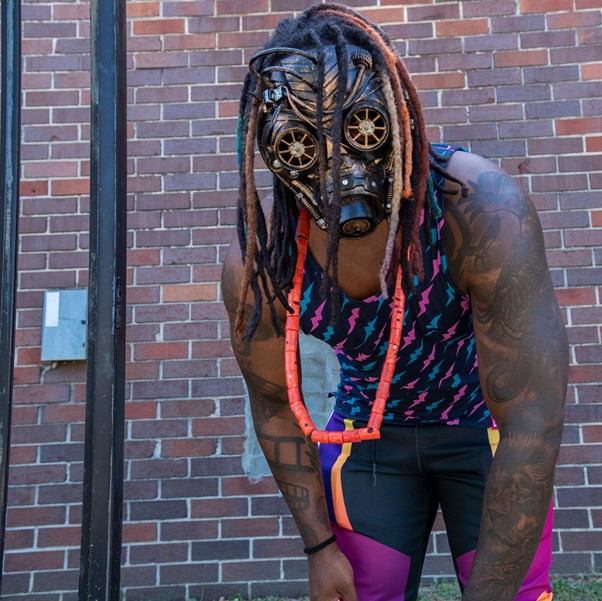 Known for his signature full face mask, Weku Did That is causing quite the uproar, as one of Atlanta’s Rising Music Producers. The masked producer is bringing quite a bit of attention to a budding genre of music that he is coining as Trap Rock. The production style seems to be centered around 808 drums, electric guitars, melodic chords and accenting synths.

The known R&B producer stated that “he has loved rock music since he was a kid, and so being able to fully express himself in this way he feels is such a gift”. Working with longtime collaborator Rene Bonét he is building up quite the catalogue.

The two give off Missy and Timbaland vibes which is so refreshing in a market where all the music has started to sound the same. He has also recently had his production featured on multi-platinum selling songwriter/artist, Mickey Shiloh’s latest album. Exploring more on the masked man behind the beats I found out he released an R&B Instrumental album titled “The Case for R&B VOL 1.”, and it is streaming on all platforms.

The production style is centered around classic, pop, and alternative styles of R&B. Weku states, “R&B has always been a passion of mine and I feel like there are not enough producers that dedicate themselves to the art that is R&B, so I wanted to do something for the singers out there”. When asked about the mask, he let us know that the mask is a part of who he is. Since entering the industry on this level few have seen his face and he intends to keep it that way. “It keeps me focused… there are so many distractions in this industry, I have to stay focused”.

He is also not afraid to jump behind the camera as a cinematographer and creative director, adding his own finesse to music videos for the aforementioned Rene Bonét, which were featured on Revolt TV. He is definitely an asset to this industry, and we look forward to the work he will be attached to in the future.

Stream the case for R&B:

Stream on YouTube: “The Case for R&B VOL 1.” An Instrumental Album by Weku Did That.

Stream on Apple Music: “The Case for R&B VOL 1.” An Instrumental Album by Weku Did That.

Stream on Spotify: “The Case for R&B VOL 1.” An Instrumental Album by Weku Did That.