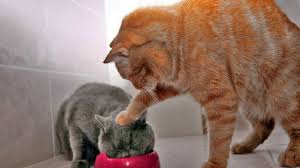 Not all cats are bossy, however, there is a well-known belief that some breeds of cat can be quite dominant and pushy. A lot of this comes back to how the owner treats their cat. Some kittens receive too much attention when they are young, which causes the young feline to lash out in an aggressive manner against its owner. The natural response of the owner is to give the cat some space and the cat will recognise that its efforts were successful. Unfortunately, this can inculcate poor habits, in which the cat feels it can be overly dominant and pushy with its owner and its fellow pets (like dogs).

Cats will begin to show more dominant and bossy behaviours once they reach about 2 years of age. Cats will reveal their bossy, aggressive qualities via hissing, growling and even hitting. If you hop onto YouTube, you’ll easily be able to find heaps of videos showing cats acting bossy towards other cats and dogs.

So, why are some cats more aggressive or bossy? Sometimes, it comes down to a personality thing. However, in other cases, it is because of the environment the cat lives in. For example, stress can trigger aggressive and bossy behaviour in your cat. If your cat is constantly placed into stressful situations, you can expect it to lash out at times. Likewise, cats can also act bossy if they believe they have been displaced in the household hierarchy. If their owner buys a new cat or animal, the original cat might begin to feel threatened or unwanted, which can exacerbate bossy behaviour.

There’s no reason to be overly concerned if your cat is bossy, as long as it is happy. In fact, check out some of the following 10 pictures, showing how cats can be seriously bossy against dogs.