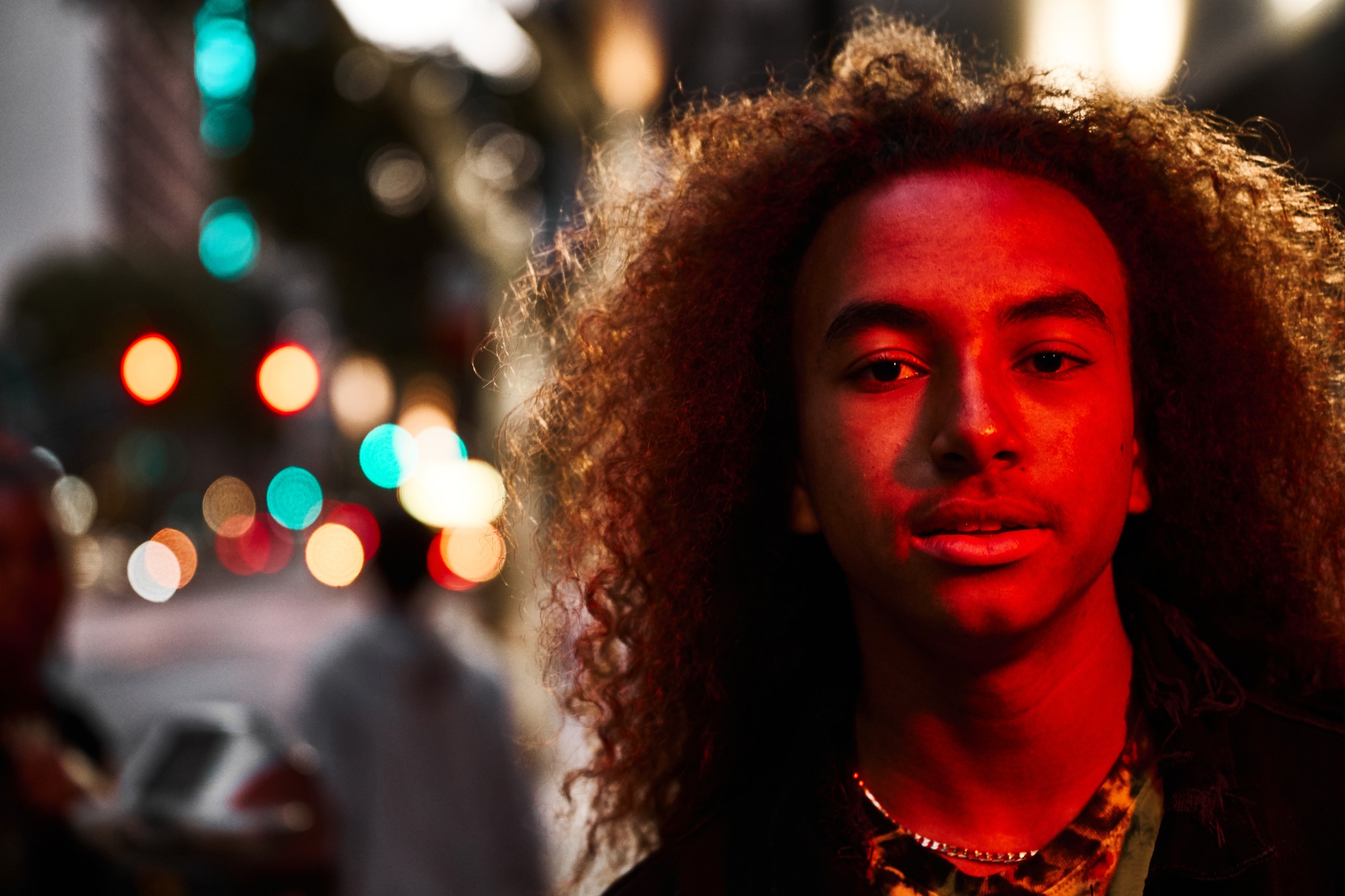 Phoenix Fya (Phoenix Amari Harrison) is a multi-talented musician and singer who’s quickly rising in the music scene. His catalogue as a recording artist is even more impressive when you realize he’s only 15 years old. His latest track Death is Trying is both insightful and inspiring, and fans are eagerly awaiting the music video which was teased on YouTube earlier this month.

Phoenix Fya kindly answered some questions about his work.

Who or what first inspired you to start writing, producing, and recording your own songs?

I think a lot of things inspired me. Whenever I was in the car with my Mom, she would blast all types of music from Rock to Rap to Gospel. Ever since I was young, my sister would play her favorite music, and we would dance in her room together, and my Dad had all this musical equipment because he created songs and sang too.

I remember the first time I listened to Drake – I heard how he would use his voice to move between rapping and singing – it was different, and I liked it. Usually, a featured artist would sing on a rapper’s song, but Drake did it all himself. It was something I had not heard before, and his style resonated with me.

I liked to sing, but I really loved creating melodies and beats, and I always loved writing my lyrics and rapping. At this time, I was ten years old, and I was active in the chorus and theater program at school – I played Simba in the Lion King, I was Aladdin – and I had to sing all the songs. I used to think my music teacher, Mr. Connor was so hard on me, but he kept telling me that I had the range and he pushed me, but one day I showed him a song that I created and wrote, he loved it, and he put me on stage to perform.

Did anyone teach you how to produce your music?

No. My Dad had all this equipment, and I remember watching him – but whenever he was at work, I used to start up his equipment and start messing with it. One day I showed my Mom, and she was amazed that I had done it all myself. She watched me make music and immediately started pushing for me to see a real studio and meet people for mentorship.

Once my Dad realized how much I loved instruments, he found a music school and paid for all these lessons for different instruments, and my sister Cheyenne was always there cheering me on and loving my ideas.

Do you have a specific process you follow when writing a new track?

It just comes. Sometimes it’s a feeling, and I want to express it, so I do it with creating a melody. Sometimes I start writing some lyrics that also come from a feeling or a circumstance that I was in or something I saw, and then I create the music around the lyrics. Honestly, I just pick up the guitar or go on the keyboard and start working, and it just comes.

Can you describe some of the themes you like to explore with your music?

Oh, well, I like orchestration a lot. I mean, I watch movies and I hear the music in it, and sometimes I just love what I hear. It moves me, and I think – I would do this to make that feeling more exaggerated – or I would do this when the main character smiles or frowns or whatever. I get lost in that sound sometimes. I think we all hear that music in the background, but for me, it really affects me, and whenever I am thinking about music, it’s just a feeling.

So, to answer your question, I don’t really think of themes, I just go with my feelings.

Everyone. My music is for everyone and anyone who likes it. I believe a child can hear something in it and love my songs just as much as an adult can like it. Maybe they like the beat of it, or maybe they like what my lyrics said – I just make music because it’s fun.

For me, there are all kinds of music. I will just play Debussy all day for inspiration or listen to this composer Max Ritcher. When we go on road trips, we have these long playlists, and I listen to it all: U2, The Stones, Lenny Kravitz, James Brown, Michael Jackson, Stevie Wonder, Prince, MF Doom, Drake, SchoolBoy Q, JpegMafia, Rihanna, J. Cole, Kendrick Lamar, Pharrell, Frank Ocean, Joji, Cardi B, Tupac, Justin Bieber, FKA Twigs, Billie Eilish – seriously, I can’t name them all – there are so many artists I like.

Your music video for Death is Trying deals with a lot of our current day issues – did you plan that?

No. I wrote Death Is Trying before the protests, before all of the sadness of countless lives lost due to racial profiling. When I began writing, we were already in COVID, but I was thinking of psychological destruction – it’s hard to explain, but like a mainstream idea that can be used as a launch point – some type of disrespectful destruction.

I kept feeling like the song had a tad of sadness in it already, although the chords were getting higher and higher. Later during the protest, everything felt darker, so I started contributing it further to the mood of our world – the virus, the deaths, the sadness.

When I had a chance to bring my vision to life, I worked with Jonah Mazer and Miles Salzgeber from Living Records, and they felt the same vibe – so we created the story.

What was it like to work on the video?

It was really great. We had the best time. We just bonded like brothers. We masked up, played it safe, everything outside and in big spaces – it was a great experience. I got to share my dreams, and those guys were super easy to work with – I mean working with Jonah and Miles and their team was something I have to do again. They know how to work with an artist’s vision, and I really like that.

What can fans expect next from Phoenix Fya?

Well, I have ceaseless amounts of ideas, so there is quite a lot more music. Right now, there are two more songs that we were able to make into videos, but on my computer, I have plenty of material that I am waiting to put out – plenty of music and plenty of stories.

Some of it’s happy, some of it’s sad, some of it’s straight party-dance music, and some of it is that deep philosophical story stuff – but I’ll just keep making it and sharing it, and we’ll see what happens next.

Thank you for sharing your thoughts with us!
You can follow up with Phoenix Fya at https://phoenixfya.com and on Instagram @phoenix_the_fya