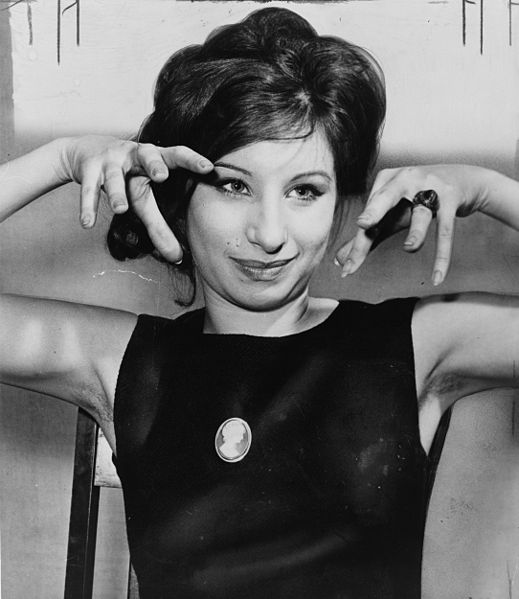 Barbra Streisand (birth name Barbara Joan Streisand) is famous for being an American singer, actress and film producer. Her highly successful career has spanned more than six decades and she has won numerous accolades over that time including two Academy Awards, ten Grammy Awards, five Emmy awards, a Tony Award and four Peabody Awards. She is one of only a few performers in the entertainment industry that has won an Emmy Grammy, Oscar and Tony Award.

Streisand first began her career as a singer before venturing into film and filmmaking. Streisand has the distinction of being one of the best-selling artists in history, having sold more than 68.5 million albums in the United States alone and more than 150 million records around the world. Streisand also holds the record as the female artist with the most top ten albums and the female recording artist with the most number one albums. Impressively Streisand is also the only artist to have a number one album in each of the previous six decades. In total she has 53 Gold albums, 51 platinum albums and 14 multi-platinum albums.

At the age of 16 Barbra Streisand was living a gypsy lifestyle whilst she tried to get her break in show business. She began working at the Lunt-Fontanne Theatre in 1960 and found out the casting director was looking for singers. She was not picked for the part but the casting director encouraged her to pursue singing. Her boyfriend Barry Denen encouraged her to enter a talent competition which she won. Barbra Streisand was given a job at Bon Soir nightclub and began to listen to other female singers which improved her state presence. Streisand was given her first stage role in the play ‘Another Evening with Harry Stoones’. She was subsequently booked at the Blue Angel nighclub in Manhattan. She was then asked to audition for ‘I Can Get It For You Wholesale’ a musical comedy where she met and fell in love with Elliott Gould.

Streisand made her first on-air appearance on ‘The Tonight Show’ where she sung ‘A Sleepin’ Bee’. In 1961 she also became a regular on the variety series ‘PM East/PM West’. She appeared on ‘The Garry Moore Show’ in 1962 where she sung ‘Happy Days Are Here Again’. She continued to appear a number of times on ‘The Tonight Show’ becoming a favourite of the audience and Johnny Carson. She also began appearing on the ‘Ed Sullivan Show’ and was invited to co-host the ‘Mike Douglas Show’.

Barbra Streisand’s first album, ‘The Barbra Streisand Album’ was released in 1963 and made the top ten on the charts the album won three Grammy awards and made her the best-selling female singer in the United States. She released her second album the same year and performed at night clubs in a number of cities. 1963 was by all account her breakthrough year. In 1964 she returned to the stage in the play ‘Funny Girl’. She appeared in they play again in 1968 at the Prince of Wales theatre and made appearance in television specials between 1965 and 1968.

Streisand went on to record 50 studio albums over the course of her career. She was popular on the pop charts in the 1970s and had a number of hits including ‘The Way We Were’, ‘Evergreen (Love Theme From A Star Is Born), ‘No More Tears (Enough Is Enough), ‘You Don’t Bring Me Flowers’ and ‘The Main Event’. She began the 1980s with the album ‘Guilty’ which included the hit songs ‘Woman in Love’, ‘Guilty’ and ‘What Kind Of Fool’.

The singer returned to her Broadway roots with the 1985 album, ‘The Broadway Album’ which made it to number one on the charts and was certified quadruple platinum. Barbra Streisand released the live album, ‘One Voice’ the following year and began work on another Broadway album but was unhappy with the outcome and scrapped the project.

As the 1990s rolled around Streisand made the decision to focus on her career as a film director and stepped away from the recording studio, although she released a box-set titled ‘Just For The Record’.

A year later, Streisand held a number of concert fundraising events which helped Bill Clinton gain office. The singer released the album ‘Back To Broadway’ in 1993, it debuted at number one on the pop charts. In the same year she announced that she would do her first live concert performance in 27 years, she proceeded to tour until 1994. The concert became the top grossing for the year and made Streisand the most financially successful female performer at the time.

She released the song ‘I Finally Found Someone’ which peaked at number eight. In 1997 she released a collection of songs titled ‘Higher Ground’ which debuted at number one on the pop charts. The following year she released an album titled ‘A Love Like Ours’ after marrying her husband Brolin.

She returned to the stage on New Years Eve in 1999 and later released the concert album, ‘Timeless: Live In Concert’. In 2000 the singer announced that she would be retiring from performing public concerts.

In 2001 the singer released the Christmas album. ‘Christmas Memories’ and later ‘The Movie Album’. In 2005 she released the album  ‘Guilty Pleasures’ and the following year announced that she would be returning to touring. The tour set records for earnings and led to criticism against the singer for price gouging on tickets.

Barbra Streisand has also had a lucrative acting career. Her first role was in the film version of her Broadway play ‘Funny Girl’. She later appeared in the 1969 film ‘Hello Dolly!’ and ‘The Owl and the Pussycat’. In the 1970s she appeared in a number of comedies including ‘What’s Up Doc?’, ‘The Main Event’ and ‘For Pete’s Sake’.

Barbra Streisand has also produced a number of her own films, her first was ‘Yenti’ in 1983. She has also directed ‘The Prince of Tides’ and ‘The Mirrow has Two Faces’.

The actress returning to film after an eight year break with the comedy ‘Meet The Fockers’. She appeared in the sequel film in 2010, ‘Little Fockers’.

In 2011 she appeared in the film ‘The Guilt Trip; alongside Seth Rogen and is set to direct the biopic ‘Catherine the Great’ and appear in the film version of the musical ‘Gypsy’.

Barbra Streisand’s first marriage was to fellow actor Elliot Gould. The couple were married between 1963 and 1971 and had one child together, Jason Gould. Her second marriage was to James Brolin whom she married in 1998, the couple have no children together. Streisand has also previously been romantically linked to Canadian Prime Minister Pierre Trudeau, producer Jon Peters and tennis star Andre Agassi (with whom she has a 28 year age difference).

The actress and singer is famously as dog lover and cloned her beloved dog Samantha. She also owns many other dogs.