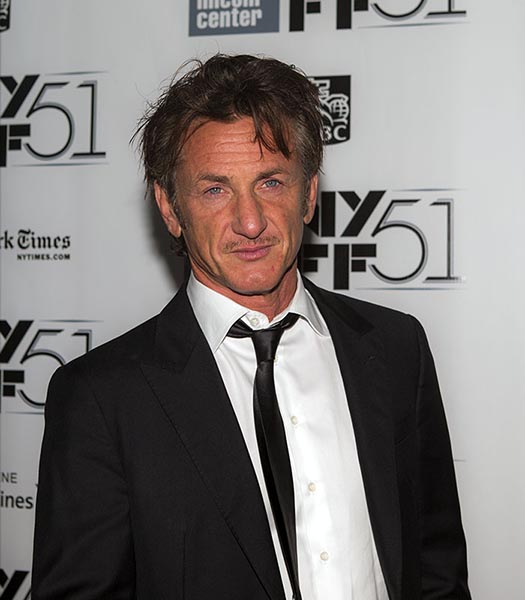 What is Sean Penn’s full name?

Sean Penn’s full name is Sean Justin Penn, he drops his middle name ‘Justin’ during his professional career and chooses to go by just his first and last name. Sean Penn is a well-known name in Hollywood; he’s been active in the world of show business since 1974.

What is Sean Penn’s age?

Sean Penn was born on the 17th August 1960 in Santa Monica, California. He is currently 59 years of age. Sean Penn has salt and pepper hair and looks distinguished with his current looks and appearance. He is a smoker however and his face is starting to show wrinkles and signs of aging. At almost 60 he is still one of Hollywood’s most attractive bad boys.

Who is Sean Penn’s family?

Sean Penn is the son of actor and director Leo Penn and actress Eilieen Ryan (nee Annucci). It seems he was destined to be a film star, considering his parents were in the entertainment industry. Sean Penn’s older brother is musician Michael Penn. His younger brother, Chris Penn was also an actor but he died in 2006. Chris Penn often played the villain or working class lug, he died from non-specific cardiomyopathy.

Where did Sean Penn go to school?

Where does Sean Penn live?

Sean Penn has a number of properties. He currently resided in a single-level ranch estate in Malibu, California. The home is located in a gated estate and has its own gated and beach access. The home is designed in a ‘U-shape’ in the traditional California Hacienda style. The home was purchased by Sean Penn in 2009 for $3.8 million. The home has five bedroom and five bathrooms and a separate maid’s guesthouse. The home also has a motorcourt with room for 10 cars, a swimming pool and terraced gardens.

What was Sean Penn’s height and weight?

Sean Penn is approximately 5 feet 8 inches tall or 172 cm and he weights around 70kg’s. Sean Penn is quite a petite man, he less than the average height for most men in America and much shorter than the Hollywood average. He’s quite thin and has never been overly bulky or muscular unlike many of the Hollywood leading men.

What nationality is Sean Penn?

Sean Penn was born in the United States and is an American citizen. His paternal grandparents were immigrants from Lithuania and Russia; they were both Ashkenazi Jews, whilst Sean Penn’s mother is of Irish and Italian descent.

Sean Penn’s mother was a Catholic of Irish and Italian descent whilst his father was a secular Jew. Penn grew up in a secular household and grew up to be agnostic. He says that he feels that there is a design to life and appears to believe is some kind of pre-determination but does not follow or believe in any particular organised religion or faith. He says he believes in the mystery of God but doesn’t seem to have settled on a particular God. He feels that the certainty many people feel towards their religion is what causes problems.

What is Sean Penn famous for?

Sean Penn is famous for being an American actor, director and filmmaker. He has won two Academy Awards over the course of his career. His first was won for his role in the mystery drama Mystic River and the second for the biopic Milk. He is also well known for his political views and activism.

How did Sean Penn’s career start?

Sean Penn career first started in television shows, he made his first appearance in an episode of The Little House on the Prairie – the appearance on episode 112 was brief an and directed by his father, Leo Penn. Penn started his film career with an appearance in the military movie Taps. The following year he appeared in the hit comedy film, Fast Times at Ridgemont High which helped to popularise the use of the word ‘dude’. He next appeared in the movie Bad Boys which helped to propel his career in acting. He next appeared in The Falcon and the Snowman where he played the main character Andrew Daulton Lee.

What was Sean Penn’s breakthrough role?

Sean Penn next appeared in the crime dramas At Close Range (1986), State of Grace (1990) and Carlito’s Way (1993) the roles earned his a lot of critical acclaim and helped to make him well-known internationally. He later appeared in Dead Man Walking (1995), a role which earned him and Academy Award Nomination and the award for Best Actor at the Berlin film festival.

What has Sean Penn done since his breakthrough role?

Sean Penn later appeared in Woody Allen’s comedy drama Sweet and Lowdown (1999) and I Am Sam (2001) which both earned him Oscar nominations. He won his first Academy Award for Best Actor after appearing in the 2003 film Mystic River. He later won a second Academy Award for his appearance in the 2008 biopic Milk. He has also previously won Best Actor at the Cannes Film Festival for his role in the film She’s So Lovely and won the Best Actor Award at the Venice Film Festival for his role in HurlyBurly. He made his directorial debut with the film The Indian Runner and followed up with The Crossing Guard and The Pledge.

What is Sean Penn’s net worth?

Sean Penn has an estimated net worth of approximately $150 million thanks to his acting, screenwriting and directing efforts. Whilst Sean Penn began with smaller paychecks for his early appearances in films, he was commanding $5,000,000 by the time of his appearance in I Am Sam.

Who has Sean Penn married?

Sean Penn has been married twice. His first marriage was to the famous pop singer Madonna, whom he met in February 1985. The couple married in August 1985 on her birthday. The couple starred together in the critically panned and highly derided Shanghai Surprise (1986) and Madonna later dedicated her third studio album True Blue (986) to Penn. Their relationship was characterised by violent outbursts against the press.

One such incident involved Penn getting arrested for assaulting a photographer on a film set; he was sentenced to jail in 1987 and served 33 days of his 60 day sentence. Madonna filed for divorce in 1987 but withdrew the papers and then filed again in 1989. She filed an assault claim against Penn, claiming he has beaten her in their Malibu home but she later dropped the charges.

In 2015 Madonna claimed that the allegations were malicious and false. Penn then moved in with Robin Wright but separated from her in 1995, the couple reconciled in 1996 and were married. They filed for divorce in 2007 but then reconciled and after for a dismissal, the couple again separated in 2009 but reconciled before filing for divorce once again in 2009 and getting divorced in 2010.

Who has Sean Penn dated?

Sean Penn has also previously dated singer Jewel, whom he met on Late Night with Conan O’Brien. After the end of his marriage with Robin Wright he started dating the actress Charlize Theron in 2013, the couple announced that they were enegaged in 2014 but they did not get married, instead Theron ended their relationship in 2015.

Does Sean Penn have kids?

Sean Penn has two children from his second marriage with Robin Wright. Their first child is daughter Dylan Frances who was born on the 13th April, 1991. Their second child, son Hopper Jack was born on the 6th August 1993.