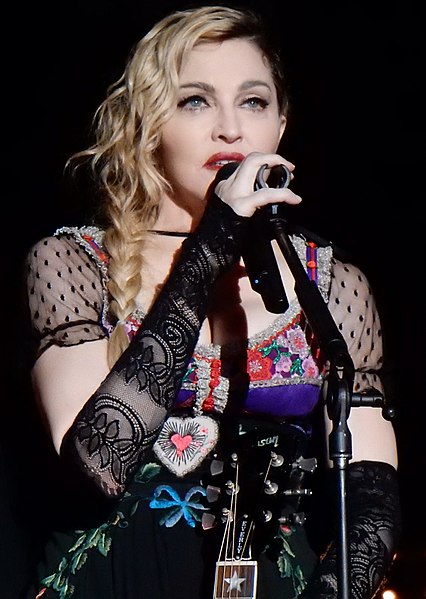 Madonna is famous for being an American singer, songwriter, actress and business entrepreneur. She has gained a reputation as the ‘Queen of Pop’ a title that has been used to regularly refer to the singer since the 1980s. She is well-known for regularly reinvented her image and for pushing the boundaries of mainstream music. Madonna has frequently drawn both praise and criticism throughout her career and is often cited as one of the most influential pop singers in history. Madonna began pursuing her career and quickly shot to fame in the 80s and has maintained her success into the 90s and even in the early noughties.

Madonna has appeared in a number of films, leads her own record label Maverick and has been the head of a number of other business ventures including a fashion label, children books, health clubs and film production. The singer is one of the best-selling female artists in history, having sold more than 300 million albums across the world. The singer has won many awards and accolades over the course of her career and was inducted into the Rock and Roll Hall of Fame in the first year that she became eligible.

The singer had a musical education from a young age, she took classical piano lessons and later ballet lessons where her teacher persuaded her to pursue a career in dance. She later received a scholarship to attend the University of Michigan for dance. She studied under notable American dancer Martha Graham who nicknamed Madonna ‘Madame X’.

In 1978 the singer dropped out of college and moved to New York City. She began taking dance classed at Pearl Lang Theatre and started to work as a back-up dancer and singer. During her time in New York she became romantically involved with Dan Gilroy whom she started a band with. She later left the band and formed a new band with boyfriend Stephen Bray before she went solo. Her talent impressed DJ Mark Kamins who arranged for her to meet with Sire Records.

The singer was signed to Sire and released the single ‘Everybody’ in 1982 and later followed it with ‘Burning Up’ in 1983. Both singles became popular on the club scene and reached number three on the Dance Club charts.

The singer released her debut album ‘Madonna’ in 1983, the album peaked at number six on the Billboard 200 charts and included two top ten singles, ‘Borderline’ and ‘Lucky Star’.

Madonna proved to be a trendsetter with her choice of style becoming key to female fashion in the 1980s. Lead by stylist Maripol her signature look included lace tops and skirts, capri pants, fishnets, crucifix jewellery and bleached hair. In 1984 the singer released the album ‘Like A Virgin’, the album went to number one in a number of counties and received diamond status.

The title track of the album reached number one on the charts and remained there for six weeks in the US. The song and its accompanying music video received criticism from conservatives who were morally opposed to it. The singer received a great deal of media attention for her performance of the song at the 1984 MTV Video Music Awards, which she attended in a wedding dress with white gloves.

Madonna made her first film appearance in ‘Vision Quest’ which included the new singled ‘Crazy for You’ and ‘Gambler’. The singer also appears in ‘Desperately Seeking Susan’ which was later named one of the best films of 1985.

Madonna’s first tour, ‘The Virgin Tour’ began in 1985 and saw many fans dressed like her. In the same year Playboy and Penthouse released nude photos of the singer and despite the uproar she remained defiant.

Madonna released her third album ‘True Blue’ in 1986. The albums included the hits ‘Live to Tell’, ‘Papa Don’t Preach’, ‘True Blue’ and ‘Open Your Heart’ which all reached number one in the US and UK. In 1992 the album was featured in The Guinness World Record Book as the best selling album for a woman of all time.

Madonna made an appearance in the film ‘Shanghai Surprise’ in 1986, the film earned her a Raspberry Award as Worst Actress for the year. She later appeared in the film ‘Who’s  That Girl’ and subsequently went on the ‘Who’s That Girl World Tour’ in 1987.

In 1989 Madonna accepted an endorsement deal with Pepsi and released her single ‘Like A Prayer’ which was the title track for her fourth album. The backlash from Christian groups led to Pepsi pulling the commercial. The song topped the charts in the US and many other countries.

Her fourth album also included the hit singles ‘Express Yourself’ and ‘Cherish’. Madonna appeared in the film ‘Dick Tracy’ and released the accompanying soundtrack ‘I’m Breathless’ which included the hits ‘Vogue’ and ‘Sooner or Later’.

The singer embarked on her ‘Blonde Ambition World Tour’ in 1990. The live recording of the tour earned the singer a Grammy Award. In the same year the singer released the compilation album ‘The Immaculate Collection’.

In 1992 the singer appeared in the film ‘A League Of Their Own’ which reached the number one spot at the box office. In the same year she also opened her own film production company, Maverick which first projects included the release of her fifth album ‘Erotica’ and the coffee table book ‘Sex’. The book received a great deal of backlash and overshadowed the release of her album, which was her first not to include a chart-topping song.

Madonna took an interest in Eastern religion and Kabbalah which was the topic of her seventh album ‘Ray of Light’ in 1998. The album was well received and peaked at number one in a number of countries. The singers eighth album ‘Music’ was released in 2000 and include three top singles including ‘Music’, ‘Don’t Tell Me’, ‘What It Feels Like For A Girl’.

In the same year she starred in the the film ‘Swept Away’, directed by her future husband Guy Ritchie.

In 2003 the singer famously gave a provactive performance where she kissed Britney Spears at the MTV Video Music Awards.

In 2005 the singer released the album ‘Confessions on a Dance Floor’ which won her a Grammy Award and included the hit single ‘Hung Up’ which reached number one in 41 countries. Madonna went on tour in 2006. In 2008 the singer released the album ‘Hard Candy’ which debuted at number one in 37 countries and included the single ‘4 Minutes’ which peaked at number three.