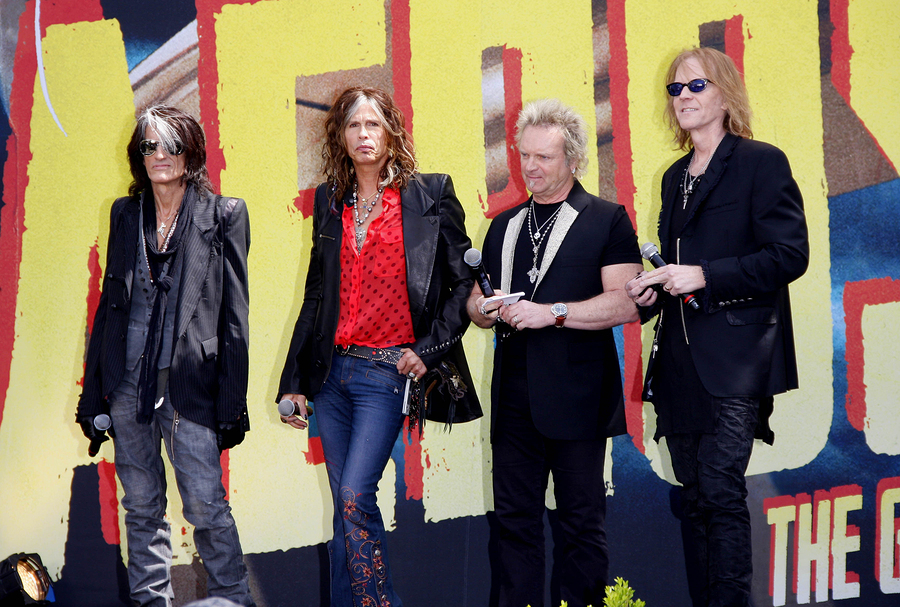 Aerosmith is an American rock group famous for being one of America’s greatest rock and roll bands. The band consists of Steven Tyler on vocals and keyboard, guitarist Joe Perry, bassist Tom Hamilton, drummer Joey Kramer and guitarist Brad Whitford.

The band is well known for their sound which incorporates rhythm and blue, pop rock and heavy metal sounds. The band is often credited as a heavily influential band for many newer acts.

The band was first formed in 1970 and became popular in Boston. The band went on to become the best-selling American hard rock band in history and have sold more than 150 million records around the world. The band has the most multi-platinum albums of any American band and has won a number of accolades over the years including four Grammy awards, six American Music Awards and ten MTV video Music Awards.

The band first began after Steven Tyler’s band Chain Reaction and the Jam Band both played the same gig. Steven Tyler loved the other bands sound and wanted to combine the band; they both met up in 1970 and considered the idea. Steven Tyler pushed to be lead vocalist and the other band members agreed and the new band was formed. The band members moved in to a home together and began writing and developing music together.

The band name was suggested by Kramer who said he used to write it on his school notebooks. The name was considered after the band chose not to call themselves ‘The Hookers’ or ‘Spike Jones’. The band played their first gig at a high school and then Brad Whitford was replaced by Tabano.

The band began to achieve some local success in 1971 and where able to secure management with David Krebs and Steve Leber in 1972. Clive David, the president of Columbia Records was invited to see the band play. The band paid out of pocket to get on the bill at Max’s Kansas City. Aerosmith were signed to Columbia in 1972 and released their debut album ‘Aerosmith’ which was released in 1973.

The highest charting song on the album was ‘Dream On’ which reached number 59 on the charts.

The album reached Gold certification in the beginning before later being certified double platinum. The band toured extensively before they released their second album ‘Get Your Wings’ in 1974. The album contained the song ‘Same Old Song and Dance’ and ‘Train Kept-A-Rollin’ which became hits. It also contained the songs ‘Lord of the Thighs’, ‘Seasons of Wither’ and ‘S.O.S (Too Bad)’ which became fan favourites at live shows.

The band released their third album the following year, ‘Toys in the Attic’. The album contained the hit single ‘Sweet Emotion’ and a re-release of ‘Dream On’ which peaked at number six on the charts. In 1976 the band released their fourth album, ‘Rocks’ which went platinum and contained the hits ‘Last Child’ and ‘Back in the Saddle’. They released their fifth album ‘Draw the Line’ in 1977 which included the hit song ‘Kings and Queens’ and the title track. By this point the band was becoming notorious for their drug abuse on and off the stage.

In 1979 the band were working on the album ‘Night in the Ruts’ but the band decided to tour in the same year. At this point drug abuse and conflict in the same band were beginning to come to a head. Aerosmith headlined at Cleveland Stadium in 1979 but a fight erupted backstage when Joe Perry’s wife threw a glass as Tom Hamilton’s wife and Tyler and Perry got into an argument. Perry chose to leave the band and Brad Whitford and Richie Supa were brought in to fill in for him.

Their album ‘Night in the Ruts’ was released in 1979, only one song managed to chart. The band embarked on a tour but interest in the band was waning due to Steven Tyler’s drug affected performances. The band released a compilation album in 1980; it initially didn’t chart well but later became the bands best-selling album. In 1982 the band released their album ‘Rock in a Hard Place’ which reached number 32 on the charts which including the single ‘Lightning Strikes’ which reached number 21 on the charts.

The original members of the band reunited in 1984 and went on a tour called ‘Back in the Saddle Tour’. The band released the album ‘Done with Mirrors’ in 1985 which included the track ‘Let the Music Do The Talking’. Steven Tyler and Perry also appeared in RUN-D.M.C’s cover of ‘Walk This Way’. In 1986 Steven Tyler went to rehab and the rest of the band also attended rehab programs over the following years. The band released the album ‘Permanent Vacation’ in 1987 after they all became clean.

The album included the hit singles ‘Dude (Looks Like A Lady)’, ‘Angel’ and ‘Rag Doll’. The band then went on tour with Guns N’ Roses. Their next album ‘Pump’ was highly successful upon its release in 1989 and included a number of top ten singles including ‘Love In An Elevator’, ‘Janie’s Got A Gun’ and ‘What It Takes’. The band went on tour for 12 months during 1990.

In 1993 the band released the album ‘Get A Grip’ which was highly successful and debuted at number one. The band then went on an 18 month world tour and appeared on the film ‘Wayne’s World 2’. The band released two more albums with Geffen records ‘Get A Grip’ and ‘Big Ones’ before they began recording with Columbia Records on their new contract. In 1998 they released the album ‘Nine Lives’ and during their tour released the single ‘I Don’t Want To Miss A Thing’ which hit number one on the charts.

They also released an album ‘A Little South of Sanity’ which included live performances and went platinum. In 2001 the band released the album ‘Just Push Play’ which went platinum and included the top ten single ‘Jaded’. The band were inducted into the Rock and Roll Hall of Fame in the same year. The embarked on their tour in 2002 and performed at a number of big venues, including a concert at Tokyo stadium during the FIFA world cup.

The band released a blues album ‘Honkin’ On Bobo’ in 2004. In 2006 the band released a compilation album ‘Devil’s Got A New Disguise: The Very Best of Aerosmith’ which contained a number of hits including ‘Devil’s Got A New Disguise’ and ‘Sedona Sunrise’. In 2007 the band announced that they would be going on another world tour, they also developed a video game ‘Guitar Hero: Aerosmith’ in the same year.

There were rumours of Steven Tyler leaving the band in 2009 however he assured people that he wasn’t, before he entered rehab in December. The band continued to tour over the next few years whilst working on their own solo projects. The band has discussed the possibility of another studio album and announced a residency in Las Vegas in 2018 which included 50 shows and finished up until 2019. Joe Perry made the announcement that the band were in the studio recording new material for an Aerosmith album in 2019.