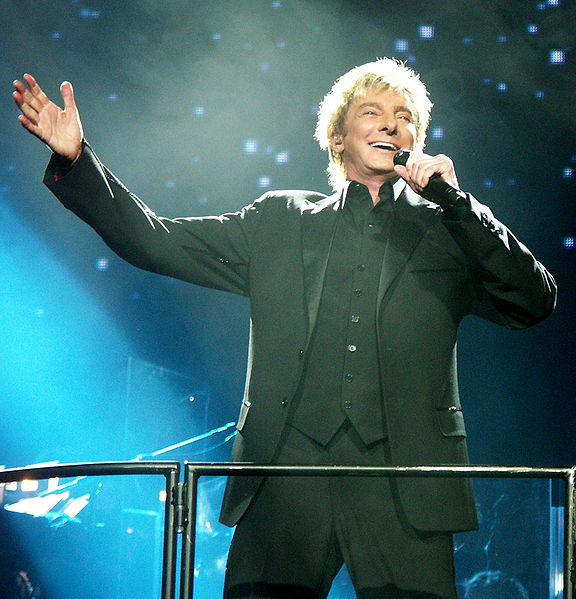 Barry Manilow (birth name Barry Alan Pincus) is famous for being an American singer, songwriter, musician and music producer. His career has spanned more than five decades and he has a number of recognisable hit songs to his name including ‘Could It Be Magic’, ‘Mandy’, ‘Copacabana (At The Copa)’, ‘I Write The Songs’ and ‘Can’t Smile Without You’.

He has had 13 number one songs in his career and a number of multi-platinum albums. Manilow has been praised by the likes of Bob Dylan and Frank Sinatra. Manilow has been responsible for producing and arranging hit albums for a number of other artists and has also been responsible for writing songs and music for movies, musicals and commercials for major companies like McDoonalds, Band-Aid and Pepsi.

He is an awarded artist, having won a Grammy Award and has been nominated a total of fifteen times. He is also responsible for producing albums by Bette Midler, Dionne Warwick, Nancy Wilson and Sarah Vaughan which have received Grammy nominations.

Manilow is one of the top-selling artists in the world, having sold more than 75 million albums worldwide.

Barry Manilow first began his career after he made the acquaintance of Bro Herrod, a CBS director who asked that he arrange some songs for a musical adaptation of ‘The Drunkard’. Manilow wrote and original score instead and it was used in the Off-Broadway musical. Manilow went on to earn money as a pianist and arranger. Around the same time he started to write and sing jingles for commercials; well-known jingles that he wrote and performed include State Farm Insurance, Band-Aid, Kentucky Fried Chicken, Pepsi, McDonalds and Dr Pepper. In 2009 he won a Clio award for his work on jingles in the 1960s. In 1967 he began working as the musical director for the television series, ‘Callback’ which first premiered in 1968. He also wrote a new theme song for ‘The Late Show’. By the time 1969 rolled around Manilow has been signed by Tony Orlanda from Columbia records to the newly acquired Bell Records.

After being signed Barry Manilow began recording and joined other artists during performances in the early 1970s. With the help of producer Tony Orlando he created four tracks, ‘Morning’, ‘Amy’, ‘Could It Be Magic’, ‘Rosalie Rosie’ under the name of Featherbed. The music did not impact on the charts initially.

In 1971 Bette Midler saw Manilow live and selected him as a pianist for her show at the Continental Baths, he also later producer her first and second albums; ‘The Divine Miss M’ and ‘Bette Midler’.

In 1973 he was nominated as a producer for the Album of the Year Award at the Grammy Awards. He continued to work with Midler up until 1975. In 1973 the album ‘Barry Manilow’ was released, it involved a number of piano-heavy pop songs and guitar-rock songs.

The album included a cover of Jon Hendricks’ ‘Cloudburst’ and a slower version of ‘Could It Be Magic’. In 1974 Clive Davis was introduced as the president of the Bell record label and a year layer the label finally has a number one hit song, with Manilow’s track ‘Mandy’.

‘Mandy’ was released on the singers second album ‘Barry Manilow II’ which was released in 1974. The singer had originally not wanted to record the song, but Davis insisted. The song was originally supposed to be called ‘Brandy’ but it was changed during the recording session. The song was the first in a number of hit singles and albums – the streak lasted through to the 1980s and spanned from the multi-platinum albums ‘Tryin’ To Get The Feeling’, ‘This One’s For You’, ‘Even Now’ and ‘One Voice’.

After the success of his first album, Arista Records (the new division which held Manilow’s contract) reissued a remixed version of his first album. The singer proceeded on his first tour and would conclude his shows with a medley which included a number of the jingles that he had sung in the 1960s.

Despite his songwriting abilities many of the singers early hits were written by others. ‘Mandy’ was accompanied by ‘Tryin’ To Get That Feeling Again’, ‘Weekend In New England’, ‘Ships’, ‘Looks Like We Made It’, ‘Can’t Smile Without You’, ‘Ready to Take a Chance Again’ and ‘I Write the Songs’ which were written by others.

In the 1980s the singer was topping the charts with the hits ‘The Old Songs’, ‘Somewhere Down the Road’ and ‘Somewhere Down the Road’. In the same year a sold out show at Wembley Arena was aired around the world. That year, Barry Manilow released the album ‘Barry’ which was the first of his albums not to reach the top ten in the United States. He followed the album with ‘If I Should Love Again’ in 1981 which went to number one on the adult contemporary charts.

The singer performed a concert at Blenheim Palace in 1983, the first of events of that type to be held of the venue and attracting a crowd of 40,000. He released the album ‘Manilow’ in 1985, the album was influenced by international music and included a number of up-tempo pop singles. In the same year he played a lead role I the film ‘Copacabana’. He wrote and performed many of the songs for the soundtrack.

With his 1989 release of ‘Barry Manilow’ the singer ended a long streak of putting out albums that contained original material written by Manilow. In 1990 he released a Christmas album titled ‘Because It’s Christmas’.

In 1990 he signed on to compose songs for a number of animated films including ‘Thumbelina’ and ‘The Pebble and the Penguin’, although the third film ‘Rapunzel’ was not released. The singer released a record album called ‘Manilow Sings Sinatra’ in 1998 which earned him a Grammy Award nomination in 1999.

The 2000s began with Manilow appeared on a HDTV special which documented his career and the concert tour he was taking part in at the time. In 2002 his album ‘Ultimate Manilow’ saw his songs return to the music charts. In 2003 he worked with Bette Midler for the first time in 20 years on the ‘Bette Midler Sings the Rosemary Clooney Songbook’ which was released in 2003.

In 2005 he started a residency in Las Vegas, the engagement was extended to 2008. During this time he released a covers album titled ‘The Greatest Songs of the Fifties’ which unexpectedly did well on the charts, debuting at number one and reaching platinum status. He followed it up with a sequel album called ‘The Greatest Songs of the Sixties’ which debuted at number two on the charts.

In 2010 the singer released ‘The Greatest Love Songs of All Time’ which earned a Grammy Award nomination. In 2013 the singer made his return to Broadway with the concert series ‘Manilow on Broadway’, it was the first time he had appeared on Broadway in more than 20 years.

Barry Manilow came out with the album ‘Night Songs’ in 2014, the album earned him a Grammy nomination. More recently the singer announced that an original musical ‘Harmony’ would make its debut at the Museum of Jewish Heritage in 2020.