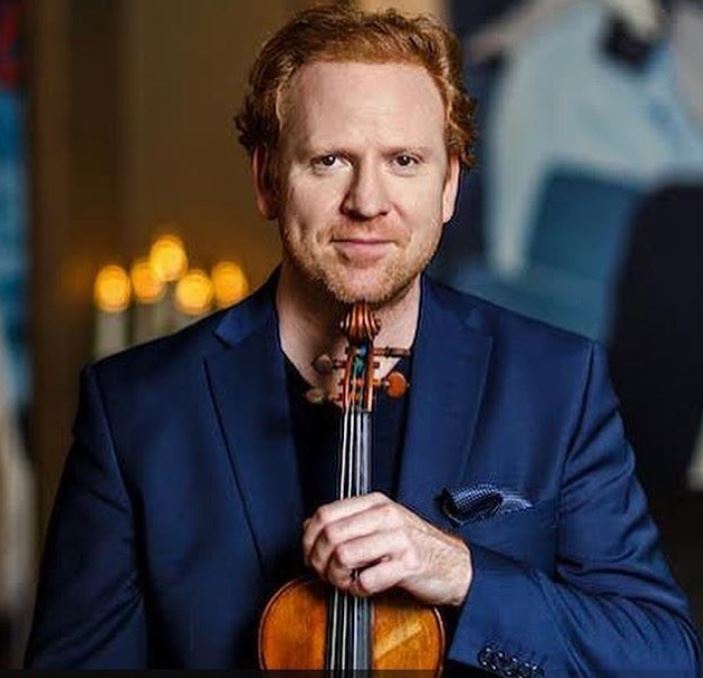 The famous violinist goes by his real name on the stage, Daniel Hope.

Daniel Hope was born on the 17th of August 1973 in Durban, South Africa. His is currently 46 years old.

Daniel Hope’s father is Christopher Hope, a novelist and his mother is Elanor Hope, an assistant to Yehudi Medhin. He is of Irish and Jewish-German descent. His maternal grandparent were formerly from Berlin and escaped the Nazi regime. He was born in South Africa but his family moved to London when he was six years of age because his father held anti-apartheid views.

Daniel Hope attended Highgate School in the UK and then studied at Yehudi Menuhin School in Stoke d’Abernon. In 2011 he was given the role of Visiting Professor in Violin by the Royal Academy of Music where he gained a diploma after studying under Zakhar Bron and a fellowship. He studied alongside Zakhar Bron, Itzhak Rashkovsky and Felix Andrievsky. When he was a student in Hamburg, Daniel Hope struck up a friendship with the composer Alfred Schnittke and began to enjoy the music of Schnittke and other contemporary composers.

The violinist currently lives in Berlin with his family and has been hosting shows in his home during the pandemic. The shows are called Hope@Home and have been popular with his fans.

Daniel Hope is famous for being a British-Irish classical violinist. He has been touring the world working as a virtuso soloist for more than thirty years and has been widely celebrated for his versatility with his musical sound and has also been recognised for his dedication to humanitarian causes. He has won many awards during his career, including the 2015 European Cultural Prize for Music which has previously been awarded to Daniel Barenboim and the Berlin Philharmonic Orchestra.

Daniel Hope’s career has spanned more than thirty years and in that time he has toured extensively as a virtuoso soloist. In 2015 he won the European Cultural Prize for Music which had previously been awarded to Daniel Barenboim and the Berlin Philharmonic Orchestra. He often makes appearances at the world’s major orchestra’s and conductors, he has directed many ensembles with t he violin.

In 2019 Daniel Hope became the artistic director of the Frauenkirche Cathedral in Desden and in 2020 it was announced that he would be the President of the Beethovenhaus Bonn which was an honourary position that meant he was following in the footsteps of the likes of figures such as Kurt Masur and Joseph Joachim.

Currently Daniel Hope is making appearances at the world’s most famous halls and festivals such as Carnegie Hall, Concertgebouw Amsterdam, Salzburg, Scleswif-Holstein, Aspen, the BBC Proms and Tanglewood. He has worked with conductors such as Kurt Masur, Valery Gergiev, Christian Thielemann and with symphony orchestras in places like Berlin, Boston, Chicago, Paris, London, Los Angeles and Tokyo. He loves contemporary music and as a result has commissioned over thirty contemporary works with composers such as Alfred Schnittke, Toru Takemitsu, Harrison Birtwistle, Sofia Gubaidulina, György Kurtág, Peter Maxwell-Davies and Mark-Anthony Turnage.

He has been highly prolific in his career as a classical recording artist, in fact he is one of the world’s most prolific classical artists with more than 25 albums under his belt. His albums have won him awards such as the Deutsche Schallplattenpreis, the Diapason d’Or of the Year, the Edison Classical Award, the Prix Caecilia and the ECHO-Klassik Award. He has also received a number of Grammy nominations over the course of his career.

One of his albums, Mendelssohn’s Violin Concerto and Octet with the Chamber Orchestra of Europe was named one of the best of the year by the New York Times. Daniel Hope’s recording of Alban Berg’s Concerto was also voted Grammophone Magazine’s ‘top choice of all available recordings’. Hs recording of Maz Richter’s Vivaldi Recomposed has sold more than 250,000 copies and became one of the most successful classical recordings in recent times, reaching number one in over 22 countries. The violinist has been an exclusive Deutsche Grammophon artist since 2007. In 2017 a documentary film titled ‘Daniel Hope – The sound of life’ was screened in cinemas across Europe and also appeared in movie theatres in Australia and North America. The violinist has published a number of bestselling books and often contributes to the Wall Street Journal and has written scripts for performances with actors scuh as Klaus Maria Brandauer and Mia Farrow. He presents a weekly radio show in Germany for the WDR3 channel and curates his own salon called ‘Hope@9pm’ which is a music and talk event at the Konzerthaus Berlin which includes cultural and political guests.

Daniel Hope plays a violin that it more than 200 years old, the 1742 violin ‘ex-Lipinski’ was given to him by an anonymous family from Germany.

Daniel Hope has been married twice, his second marriage is to German painter Silvana Kaiser. He lives with his wife in his home in Berlin, where he has lived since 2016 after moving from Vienna. The couple do not yet have any children. He holds Irish citizenship and travels on an Irish passport although he is often referred to as British because he spent much of his life there.

Daniel Hope is often praised for his commitment to humanitarian work and has consistently been an active participant in humanitarian causes over the year.