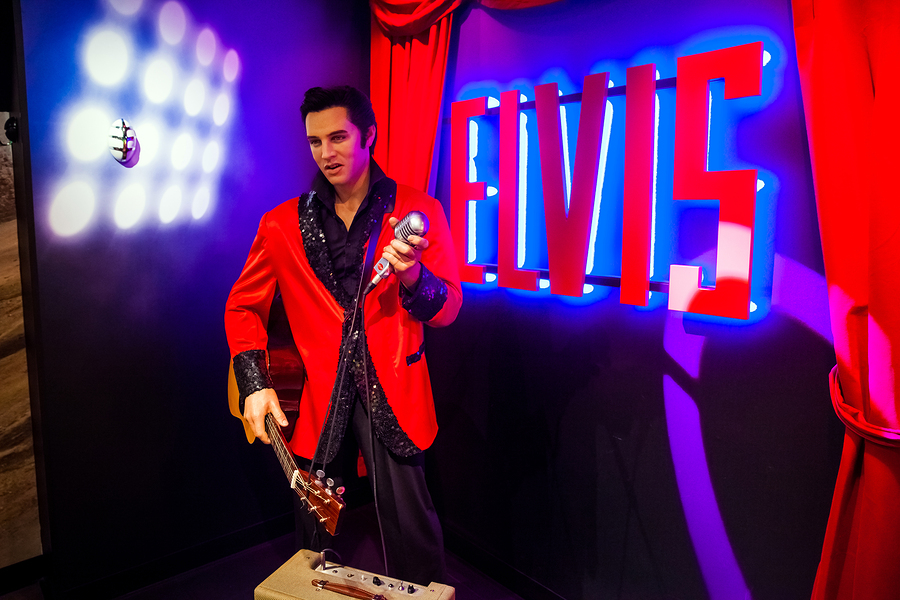 What is Elvis Presley’s full name?

What is Elvis Presley’s age?

Elvis Presley was born on the 8th January 1935 in Tupelo, Mississippi. He died on the 16th of August, 1977 in Memphis Texas at the age of 42. Elvis Presley’s death was the result of a sudden, violent heart attack. His health had begun to decline in the lead up to his death, he was heavily dependent on drugs and overdosed twice in 1973.

Who is Elvis Presley’s family?

Elvis Presley was the son of Gladys Love Presley (1912-1958) and Vernon Elvis Presley (1916-1979). He had an identical twin brother (Jesse Garon Presley) who was stillborn and a number of step-siblings from his father’s second marriage; Bill, David and Rick Stanley. Elvis had a close relationship with both of his parents, especially his mother. His family was not well-off and often relied on food assistance and neighbours to get by. His father was jailed in 1938 for altering a check and the family lost their home.

Where did Elvis Presley go to school?

Elvis Presley started school in 1941 at East Tupelo Consolidated where he showed an early interest in music and was encouraged to take part in a singing contest which was his first performance, he placed fifth. He received his first guitar for his birthday a few months later and got guitar lessons over the following year. He went to a new school in 1946 where he did not have many friends. Presley became a fan of Mississippi Slim’s show on local radio station WELO. Slim’s younger brother was his classmate and he would take him to the radio station. Presley’s family moved to Memphis, Tennessee in 1948 and Presley was reenrolled at L.C. Humes High School. He received a C in music at the school.

Where did Elvis Presley live?

Elvis Presley lived at Graceland Mansion which has now been set up as tourist site that fans can visit. Fans of the star can now tour the home and see the restored 1977 mansion which includes a large living room, kitchen, TV room, pool room and a jungle room. The home also features a trophy building, a racquetball building and meditation garden. Many of the room of the home have a Polynesian feel and include wood carvings and furniture that reflected to the time period.

What was Elvis Presley’s height and weight?

Elvis Presley stood at around 5 feet 11 inches tall or approximately 182 cm. He weighed around 80kg’s for most of his career although his weight fluctuated over the course of his career. Towards the end of his life he had put on a lot of weight due to his diet, which included a bread roll filled with peanut butter, bacon and strawberry jam.

What nationality is Elvis Presley?

Elvis Presley was born in Tupelo, Mississippi in the United States and is an American citizen. He has Scottish, Irish and some French Norman ancestry on his mother’s side. His mother also believed that his great-great-grandmother was Cherokee Indian although the assertion has been contested by genealogy researchers. Presley has German and Scottish ancestry on his father’s side.

What is Elvis Presley famous for?

Elvis Presley is famous for being an American singer and actor. He is often regarded as an American icon and one of the most significant cultural influences of the 20th century. Elvis Presley is often touted as the ‘King of Rock and Roll’ or just ‘the King’ and is credited for changing music and introducing a totally new genre to the world. Beyond that, Elvis Presley was also an important influence on the fashion and youth culture of his times.

How did Elvis Presley’s career start?

Elvis Presley began his career in 1953 when he went to Sun Records, purportedly to record songs as a gift for his mother although biographer’s believed he was hoping to be discovered. After making his recording, the boss Sam Phillips asked him to note down his name. He recorded a second time in 1954 although again nothing happened. Presley got his shot when he performed in front of Phillip’s who was looking for a white musician with the sound of a black musician. He played in front of him and although he failed to impress with the Jimmy Sweeney ballad ‘Without You’ he did manage to convince Phillip’s to bring him back for a recording session. The recording session led to ‘That’s All Right’ and ‘Blue Moon of Kentucky’ which were popular with listeners. Elvis went on to do a number of early performances and quickly became popular with female audiences.

What was Elvis Presley’s career breakthrough?

Elvis Presley released his self-titled debut album in 1956 which became the first rock and roll album to reach the Billboard charts. He made his first appearance on national television in the same year with an appearance on CBS’s Stage Show. He released the singles, Heartbreak Hotel, Blue Suede Shoes and I Forgot to Remember to Forget. He later appeared on the Milton Berle Show and started a residency on the Las Vegas strip. During his time is Las Vegas he signed a contract with Paramount Pictures. During his second performance on the Milton Berle show, Presley gave a performance of ‘Hound Dog’ that involved exaggerated body movements which caused controversy. He also appeared on the Steve Allen Show and gave a performance that he would later refer to as the most ridiculous of his career. He was then booked onto the Ed Sullivan show and his performance of ‘Love Me Tender’ shattered records with more than one million advance orders. The appearance on the show made him a national celebrity. From that time on the response to Elvis Presley’s performances became more and more fevered. He starred in a number of motion pictures including Love Me Tender. All his single in 1957 went to number one and Elvis created the popular track Jailhouse Rock for his second film of the same name.

What has Elvis Presley done since his career breakthrough?

After his initial career success, Elvis was drafted into the army at Fort Chaffee. Presley started basic training in Fort Hood, Texas but his mother contracted hepatitis and he took emergency leave to visit her, she died age 46. After finishing training Presley joined the 3rd Armoured Fvision in Germany. He was introduced to both amphetamines and karate during his time in the army. He met his future wife Priscilla Beaulieu whilst in the army. He was honourably discharged in 1960 and returned to the US. He quickly released the hit ‘Stuck on You’ which went to number one. He returned to television with a guest appearance on The Frank Sinatra Timex Special. He went on to create the album Something for Everybody before appearing in a number of movies including Flaming Star and Wild in the Country. His career started to wane in the late 60s as he singles struggle on the charts. He made a comeback appearance on TV which was well received. He continued to tour throughout the 70s but his health was noticeably deteriorating by 1973.

What was Elvis Presley’s net worth?

Who has Elvis Presley married?

Elvis Presley only got married once, to Priscilla Beaulieu whom he dated for eight years before they married. He met Priscilla whilst he was serving the army; she was only 14 at the time. The couple began dating immediately and kept in touch when he returned to the US. She moved to the United States in 1963 and the couple had their first child in 1967. Elvis Presley’s interest in Priscilla began to wane however and she had an affair with karate instructor, Mike Stone.

Does Elvis Presley have kids?

Elvis Presley had one child, Lisa Marie Presley who has grown up to have a career in the music business herself. She has released three of her own albums and has been married and divorced to high profile singer Michael Jackson and actor Nicholas Cage.