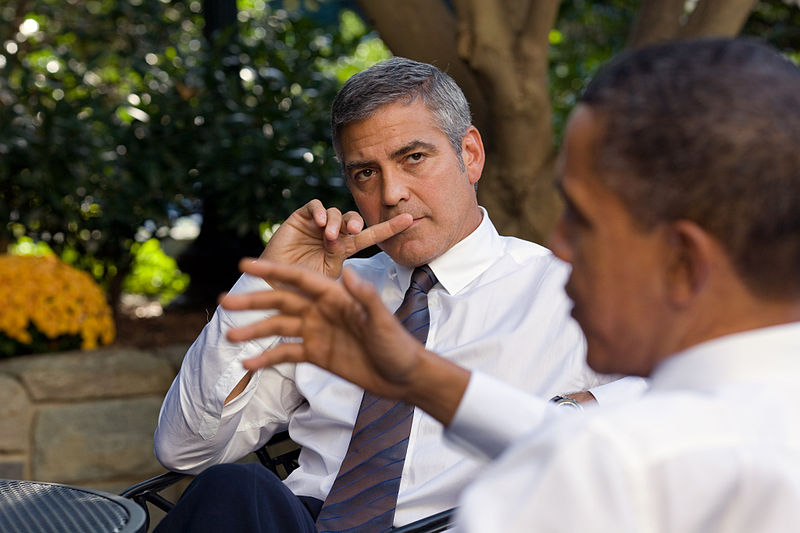 What is George Clooney’s full name?

George Clooney’s full name is George Timothy Clooney, he does not go by a stage like many other actors. George Clooney has carried his simple name on with his children, who he said he didn’t want to name ‘dumb names’.

What is George Clooney’s age?

George Clooney was born in Lexington, Kentucky on the 6th May, 1961, he is currently aged 58. George Clooney is regularly called a silver fox in tabloid’s and has been grey for a number of years, despite signs of aging he is considered to be a very attractive leading man in Hollywood. He was a bachelor for many years and regularly made it onto lists fr Hollywood’s most attractive men’s.

Who is George Clooney’s family?

George Clooney’s mother is Nina Bruce (nee Warren), a beauty queen and city councilwoman. His father was an anchorman and a television host. Clooney’s maternal great-great-great-great-great-grandmother was Mary Ann Sparrow, the half-sister of Nancy Lincoln, mother of Abraham Lincoln. He has an older sister Adelia who is a cabaret singer whilst his aunt was Rosemary Clooney. His cousins include the acotrs Miguel Ferrer, Rafael Ferrer and Gabriel Ferrer.

Where did George Clooney go to school?

George Clooney attended Augusta High School where he was a high achiever. He played baseball and basketball in school and tried out for professional baseball with the Cincinnati Reds in 1977, but he did not pass the first round of player cuts and failed to earn a contract. He went to Northern Kentucky University between 1979 and 1081 and majored in journalism before he attended the University of Cincinnati. He did not graduate from either University. He earned money at university with a job selling women’s shoes, a door-to-door salesmen position selling insurances, a job stocking shelves and a job in construction and cutting tobacco.

Where does George Clooney live?

George Clooney’s main residence is in Los Angeles where he lives in a 7,354 square foot home which he purchased in 1995 for $2.2 million.He also owns a home in Laglio, on Lake Como in Italy and a home in Oxfordshire, England. His LA home is a three story property with a pool, basketball court, theatre room and landscaped gardens.

What is George Clooney’s height and weight?

George Clooney stands at around 5 feet 11 inches tall, or 180 cm and weighs around 78kg’s. He has always been a very fit man but is not overly muscular. He has a naturally fit frame but keeps fit with bikram yoga and a healthy diet. He has admitted to enjoying vodka and tequila.

What nationality is George Clooney?

George Clooney was born in the United States and is an American citizen, although he often spends time in his homes in Italy and England. He is of Irish, German and English ancestry although his family does have strong ties to the states, he is an ancestor of Abraham Lincoln’s, mothers, half-sister.

George Clooney was raised in a Roman Catholic household, his family was very devout and for a period of time he attended the Blessed Sacrament School in Fort Mitchell, Kentucky. He served as an altar boy at the St. Susanna School in Mason, he has said that as an adult he does not know if he believes in heaven or God.

What is George Clooney famous for?

George Clooney is famous for being an American actor, director, producer and filmmaker. He has won three Golden Globe Awards and two Academy Awards during his career. He won one of his Awards for his role in Syriana and the another for co-producing Argo. He won the AFI Lifetime Achievement Award in 2018.

How did George Clooney’s career start?

George Clooney’s first role was in the mini-series Centennial in 1978. His first major role was in E/R in 1984. He then played a handyman on the TV series The Facts of Life and appeared on The Golden Girls. Hi first prominent role was in Roseanne, followed by a role on Baby Talk ad Bodies of Evidence. He also had a role on Sisters and a small part on Return of the Killer Tomatoes.

What was George Clooney’s breakthrough role?

George Clooney break-through role was in the medical drama ER, where he played Dr Doug Ross from the years 1994 to 1999. He earned a number of nominations including an Emmy nomination and three Golden Globe Awards. His first film role was in From Dusk till Dawn which he followed up with One Fine Day. He later went on to appear in The Peacemaker and later appeared in Batman & Robin.

What has George Clooney done since his breakthrough role?

After he left his role in ER, Clooney went on to have a commercially successful film career with film such as The Perfect Storm and Ocean’s Eleven. He reprised his lead role in the Ocean’s Eleven franchise for the sequels Ocean’s Twelve and Ocean’s Thirteen. He made his directional debut with Confessions of a dangerous mind. He later starred in Syriana and won an Oscar for his role. Next he appeared in The Good German and Leatherheads. More recently he has appeared in The Ides of March, Gravity, The Monuments of Men, Tomorrowland and Money Monster.

What is George Clooney’s net worth?

George Clooney’s net worth is estimated to be $500 million, in recent years he has topped the list for being the highest-paid actor in Hollywood – he made $239 million between 2017 and 2018. Clooney makes his salary from his acting and directorial pursuits, as well as endorsements. In 2018 he made money from the sale of Tequila Company which he started in 2013. The company was sold for a billion dollars and Clooney received $233 million for the sale.

Who has George Clooney married?

Who has George Clooney dated?

George Clooney has had a long dating history, he previously dated Kelly Preston between the years of 1987 and 1989.He also dated the actress Ginger Lynn Allen before dating reality TV star Celine Balitran between 1996 and 1999. He had an on and off again relationship with Lisa Snowdon between 2000 and 2005. He dated Renee Zellweger and Krista Allen during this same time. He also sated Sarah Larson from 2007 to 2008. He dated Elisabetta Canalis between 2009 and 2011 and then he sated Stacy Keibler until 2013.

Does George Clooney have kids?

George Clooney and Amal welcomed twins in 2017, a daughter, Ella and son, Alexander. The twins came after many years of speculation that George Clooney would remain a bachelor for his whole life and would never remarry or have kids.