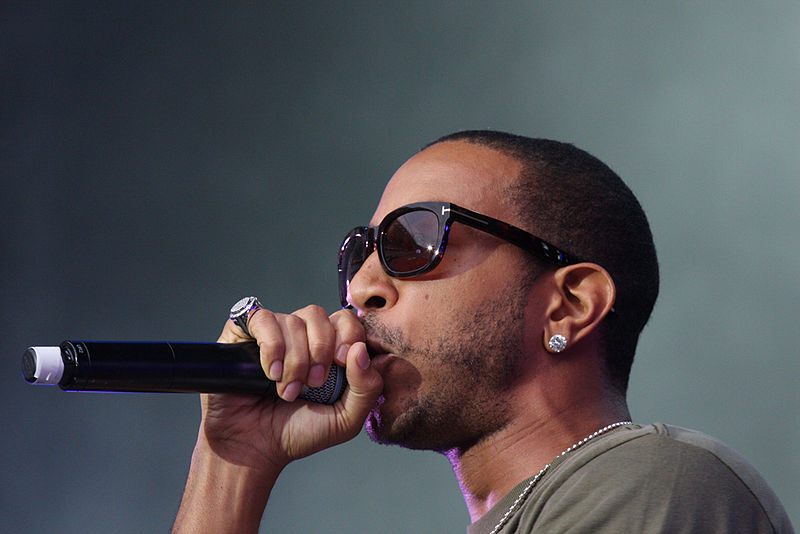 Ludacris (birth name Christopher Brian Bridges) is famous for being an American rapper, actor and record label owner. Ludacris founded the record label Disturbing tha Peace. Over the course of his career he has won a Screen Actors Guild awards, Critic’s Choice award, MTV award and three Grammy Awards. Ludacris is known for being one of the first ‘Dirty South’ rappers to attract attention and fame at the beginning of the 2000s.

Ludacris was born in Illinois and moved to Atlanta at age nine, where he first began his rapping career. A number of his albums have been quite successful and he’s appeared in a number of big films such as ‘Crash’, ‘Gamer’, ‘New Year’s Eve’ and in ‘The Fast and The Furious’ film franchise.

Ludacris worked as an intern and a DJ in Atlanta at the radio station HOT 97.5, he was known professionally as ‘Chris Lova Lova’ at the time. He worked with the artist Timbaland on his single ‘Phat Rabbit’ which appeared on his album ‘Tim’s Bio: Life from da Bassment’, the song became a hit in a number of countries in 1998. In the same year he started work on his own debut album which was titled ‘Incognegro’ and planned for released through the label Disturbing tha Peace which was an independent label at the time. The album was released in 1999 and has come to be known as one of the best examples of Ludacris’ musical style because of its upbeat, wild and comedic flow which was often attributed to Southern rappers. The album ‘Incognegro’ was supported by Ludacris’ debut single ‘What’s Your Fantasy’ which peaked at number 21 on the charts in the United States.

Despite a lack of commercial success due to poor sales, the album helped to get him a record deal with Def Jam Recordings and in 2000 he released his first major label record, ‘Back for the First Time’. His second album peaked at number four on the charts in the US and included a number of well received singles such as ‘Southern Hospitality’ and ‘Area Codes’. The album featured collaborations with artists such as I-20, Shawna, Pastor Troy, Timbaland, Foxy Brown and more. Ludacris stated during an interview that he developed his stage name because of his ‘split personality’ which he considered to be ludicrous.

The rapper completed his third album ‘Word of Mouf’ in 2001. The lead single ‘Rollout (My Business)’ earned a Grammy Award nomination during the 2002 awards show. After a brief hiatus from music Ludacris returned with the single ‘Act a Fool’ for the 2 Fast 2 Furious soundtrack. He also released another single simultaneously, the lead single for his planned album ‘Chicken-n-Beer’, the song titled ‘P-Poppin’ was not well received. His new album included collaborations with Playaz Circle, Chingy, Snoop Dogg, Shawnna and more.

In late 2003 he released a new single titled ‘Stand Up’ which made an appearance on the soundtrack of the film ‘You Got Served’. The song became one of the rappers most well received and commercially successful hits to date after it gained heavy airplay on radio stations and MTV.

His album’s next single titled ‘Splash Waterfalls’ was released at the start of 2004. The song became a huge hit on the pop charts despite the sexual content of the music video. In the same year he earned his first Grammy Award for the single ‘Yeah!’ with Usher and Lil Jon.

His album ‘The Red Light District’ was produced by Khalid alongside a number of artists such as T.I, Lil Flip and Bun B. In the opening track the Ludacris made the claim that he was only artist at Def Jam Records that was keeping the label afloat.

In 2006 the singers album was named one of the most anticipated albums of the year, titled ‘Release Therapy’ the album was released in 2006. The singer formatted the CD to include two sides with one side titled the ‘Release’ side and the other the ‘Therapy’ side. A number of guest appearances were included on the album from high profile artists such as Pharrell Williams, R Kelly, Young Jeezy, Mary J Blige, C-Murder, Pim C and Beanie Sigel. His first single ‘Money Maker’ went to number one and was his first number one song in more than six years.

The artists second single ‘Grew Up a Screw Up’ featured Young Jeezy and helped to dispel rumours that the two artists were in a dispute. The albums third single ‘Runaway Love’ peaked at number one on the US rap charts and won the awards for Best Collaboration during the 2007 BET Awards. ‘The Red Light District’ went to number one on the album charts and had sales of more than 309,000 in its first week. The album was a marked change from his previous musical style and left behind the more light hearted tone of his previous album for darker lyrics. To accompany the change in musical direction the rapper also cut off his braids (which were his trademark look) and cut his hair into a fade style.

In 2008 Ludacris released a mixtape which was intended as a preview of his upcoming lbum ‘The Theatre of The Mind’. The album was released in November 2008 and featured collaborations with artists such as Chris Brown, Lil Wayne, Rick Ross, T.I, Piles, Common, T-Pain, Jay-Z and The Game. The album debuted at number five on the charts in the United States and sold 213,493 units in its first week. The album was released on the same day as Kanye West’s album ‘808s & Heartbreak’ and so it missed out on taking the number one spot. He confirmed plans for a sequel to the album to be released in 2012.

The rappers eighth studio album was released in 2010 and was originally supposed to feature the rapper Shawnna with the idea being that they would battle on the album, but the idea fell through after Shawnna departed from the label. The album debuted at number one and received gold certification.

In 2012 he released a number of singles titled ‘Stairway to Heaven’, ‘Representin’ and ‘Rest of My Life’ which were scrapped from his album after they underperformed. After his songs underperformed plans for his upcoming album ‘Ludaversal’ stalled.

In 2013 Ludacris released the mixtape ‘#IDGAF’ and began released new singles every Friday as part of his ‘IDGAF Fridays’. During each Friday he released the songs, ‘Raised in the South’, ‘If I Ain’t Fucked Up’ ‘9 Times Out Of 10’, ‘Speak into the Mic’, ‘I Don’t Give A Fuck’. The mixtape was downloaded almost 60,000 times in its first day of release. Shortly after, Ludacris reprised his role in the Fast & Furious franchise as the character Tej. In August 2013 the rapper confirmed that he was collaborating with Anita Baker.

After a long break from music Ludacris returned to music with a single titled ‘Party Girls’ which featured Jeremih,Wiz Khalifa and Cashmere Cat. Ludacris announced that his album ‘Ludaversal’ would be released in Mach 2015, but released the EP ‘Burning Bridges’ in December 2014 ahead of the album’s release. After several years of delays ‘Ludeversal’ was finally released in 2015 and debuted at number three on the charts and received generally good reviews.

Most recently Ludacris announced that he was working on his tenth studio album and collaborated with Carrie Underwood on her song ‘The Champion’.