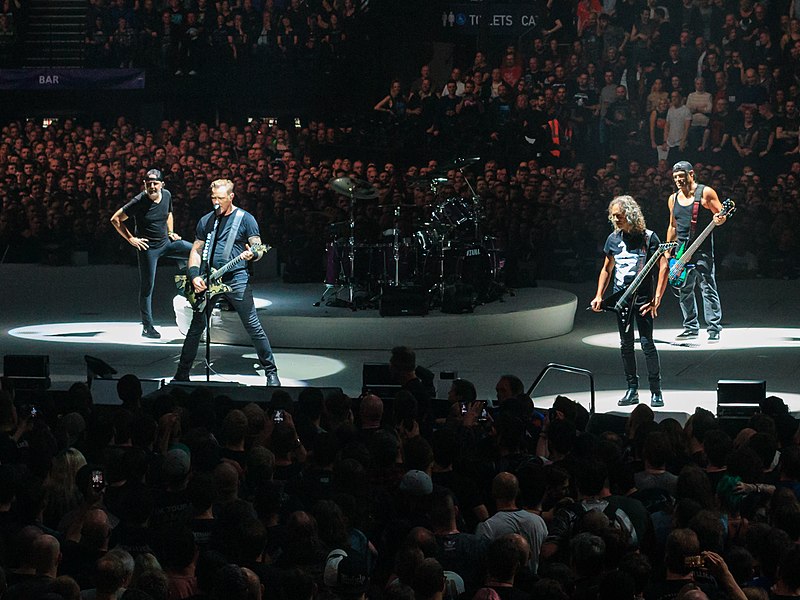 Metallica is famous for being one of the biggest and most influential heavy metal bands in the world and are known for being part of the big four which also includes Megadeth, Anthrax and Slayer. The American heavy metal band was first formed in 1981 in Los Angeles by original members James Hetfield (guitarist and vocalist) and Lars Ulrich (drummer). The band is known for their fast tempos, instrumentals and aggressive music style. Current members of the band include Hetfield and Ulrich, guitarist Kirk Hammett and bassist Robert Trujillo.

Dave Mustaine was formerly a guitarist for the band whilst Ron McGoveney, Cliff Burton and Jason Newsted were also previously members of the band. Metallica has won a great deal of critical acclaim during their career and have achieved a lot of commercial success. During their career the band has won nine Grammy Awards and has risen to become one of the most commercially successful bands in history having sold more than 125 million albums.

The band first formed in 1981 when Lars Ulrich put an ad in the paper to search for other musicians to play metal music with. The guitarist James Hetfield and Hugh Tanner answered and Ulrich recruited Hetfield. The band was formed in 1981, five months after their initial meeting. The band chose their name because Ulrich’s friend Ron Quintana had been brainstorming names for a fanzine. The band recorded their first song, ‘Hit The Lights’ in 1982 for their compilation album ‘Metal Massacre’. The band played their first live performance in 1982 at Radio City. Not long after the opened for the band Saxon during their 1982 tour.

The band then recorded their first demo album ‘Power Metal’. The band attended a show where Cliff Burton was playing and were impressed, they asked him to join their band – an offer that he initially declined before accepting on the condition that the band move to El Cerrito in San Francisco. The bands recording of their debut album was bankrolled by Johny Zazula who signed the band to Megaforce Records.

In 1983 the band recorded their debut album ‘Metal Up Your Ass’ and decided to eject Mustaine from the band, Kirk Hammett was brought in as a replacement. Mustaine spoke up in the media about how he felt that Hammett had stolen his job. Their album was renamed ‘Kill ‘Em All’ and was released in 1983. The album was not financially successful in the beginning but earned the band some buzz. Their second album ‘Ride the Lightning’ was released in 1984. The director of Elektra Records signed the band after attending a concert.

Metallica went on their first European tour with Tank. When they returned to the US they performed with Bon Jovi and Ratt.

Metallica released their third album ‘Master of Puppets’ in 1986. The album was the first to reach Gold certification and later went platinum in 2003. After they released their album they went on tour with Ozzy Osbourne.

In 1986 during their Damage Inc Tour the band were in a bus accident on their tour bus and bassist Burton was killed. After his death the band searched for a new member and eventually settled on Jason Newsted. In 1987 Hetsfield broke his wrist which forced the band to miss a planned appearance on Saturday Night Live. The band released a video called ‘Cliff ‘Em All’ to commemorate the life of Burton and his involvement in the band.

Metallica released the album ‘…And Justice For All’ in 1988 and achieved commercial success with the album which reached number six on the charts. The album went platinum after only nine weeks after its initial release. The band embarked on their ‘Damaged Justice’ tour to promote the album. In 1989 the band was nominated for a Grammy Award

but lost to Jethro Tull, the award was controversial and went down in history as one of the biggest fan upsets in Grammy history. The band developed a remixed version of their song ‘One’ which was featured on MTV.

Metallica began recording their next album in 1990, the album was released the following year and debuted at number one and gained the band mainstream attention. The album was certified platinum and supported by a 14 month tour. In 1992 Hetfield suffered burns because of a pyrotechnics setup issue.

The band returned to the recording studio in 1994, although they went on a brief tour in 1995. In 1996 the band released their album ‘Load’. They released a follow up album Reload which was promoted with the bands appearance on Saturday Night Live in 1997. In 1998 the band released the double album ‘Garage Inc’ which included newly recorded songs and the original ‘$5.98 E.P: Garage Days Re-Revisted’.

In 2000 Metallica got involved in the Napster file sharing controversy after they discovered that their entire catalogue of music was available on the program. The band filed a lawsuit against Napster in response which lead Napster to agreeing to block users who shared music without the permission of artists.

Newsted left the band in 2001 and said that he was leaving for private, personal reasons. Hetfield entered rehab in the same year due to alcohol and drug addiction. The band returned to the studio in 2002. The band released their eighth album ‘St. Anger’ in 2003, the album debuted at number one but received mixed responses. The title track won a Grammy Award in 2004. Around this time the band was featured in the documentary film ‘Metallica: Some Kind of Monster’ which detailed the making of their album ‘St. Anger’ and showed the internal conflict and difficulties that the band was facing at the time.

The band began developing a new album which was set for release in 2008 but leaked ten days early. The album, ‘Death Magnetic’ debuted at number one and made the band the first to have five consecutive studio albums debut at number one. The band toured for more than two years to promote their new album and finished touring in 2010. In the same year they released the EP ‘Six Feet Down Under’ which featured their past performances in Australia. They also released the EP ‘Six Feet Down Under (Part II)’ later that same year. In 2011 the band played in a number of shows and festivals alongside the other big four bands. In 2011 they released the album ‘Lulu’ which had been problematic to record due to tension between Lou Reed and Lars Ulrich.