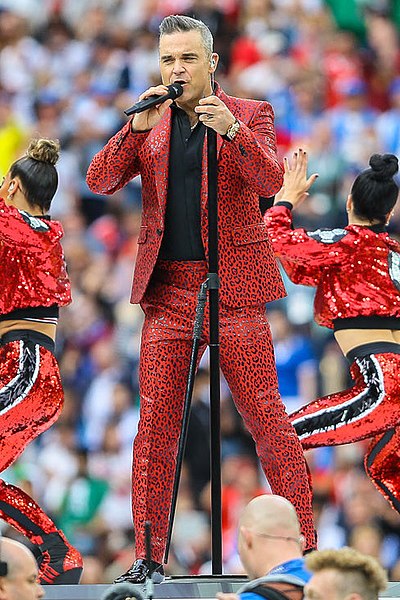 Robbie Williams (real name Robert Peter Williams) is famous for being an English singer, songwriter, actor and entertainer. He first became famous as a member of the boy band Take That, which he was a part of between 1989 and 1995. He later achieved even great success with his solo career which began in 1997. Williams has had seven number one singles in the UK over the course of his career and an impressive eleven number one albums in the UK (out of twelve). He is the best-selling solo artist in UK history and the highest selling non-Latino in Latin America. The singer gained an entry into the Guinness Book of World Records in 2006 after he sold more than 1.6 million tickets to his close encounters tour in a single day.

The singer has received a record-breaking eighteen Brit Awards (include Best British Male Artist on four occasions), two Outstanding contribution to music awards and three European MTV music award. The singer was also inducted in the UK Music Hall of Fame in 2004 and won the vote for ‘Greatest Artist of the 1990s’. The singer had sold more than 19.9 million albums and 7.2 million singles in the UK and more than 75 million around the world over the course of his career making him one of the best-selling music artists in history. He also broke the record for UK’s biggest music event in 2003 with crowds of more than 375,000 people in the audience at his concerts in Knebworth.

After taking a fifteen year break , Take That re-united in 2010 to create a new album ‘Progress’ which became the second-fastest selling album in the UK in music history. The stadium tour also became the top-selling concert in the UK’s history, although it was confirmed in 2011 that Williams had once again left the band to focus on his sol endeavours.

During his career the singer has taken part in a number of collaborations with other artists including Kylie Minogue whom he worked with on the song ‘Kids’.

Robbie Williams joined the boy band Take That in 1990 as their youngest member, he was only sixteen at the time. The singer joined after his mother saw an advertisement and suggested he try out. He began to abuse alcohol and cocaine however and struggled with the restrictive rules that Take That members had to abide by. His drug abuse had begun to escalate and in November 1994 he suffered a near overdose the night before a performance at the MTV Europe Music Awards. Concerned that the singer may drop out during the band’s upcoming tour, band members Orange and Barlow approach manager Martin-Smith with their concerns. They confronted Williams in 1995 and he agreed to leave the band, they disbanded a year later.

Williams announced plans to pursue a solo career by a clause in his contract with Take That prevented him from pursuing a solo career until the group was officially dissolved. The singer was forced to be involved in a number of legal battled before he was eventually signed to Chrysalis Records.

The singer launched his solo career with a cover of George Michael’s song ‘Freedom’ which reached number two in the singles charts in the UK. His career path mirrors that of other greats such as Beyoncé Giselle Knowles-Carter.

Robbie Williams released his debut album ‘Life thru a Lens’ in 1997, it debuted at number eleven on the charts. The single ‘Angels’ on the album became a UK best-seller and became a hit around Europe and Latin America.

In 1999 Williams was signed to Capitol Records and began a promotional tour throughout the United States. In 1999 he released the compilation album ‘The Ego Has Landed’ and began work on his third album.

The first single on the album was ‘Rock DJ’ which created controversy because of the music video, the song became a hit in the UK and reached number one. The song won the award for best song of 2000 and Best single of the year at the Brit Awards.

Robbie Williams album ‘Sing When You’re Winning’ was released in 2000 and debuted at the top of the charts in a number of countries. The album was certified 2x Platinum in the UK in its first week of release.

The singer signed a record-breaking 80 million pound contract with EMI in 2002, the deal was the largest in the British history. After signing the singer began work on his fifth studio album and spent over a year in the studio. The single ‘Feel’ became a huge international hit for the singer, reaching the top ten in a number of countries. The singer’s fifth album ‘Escapology’ was released in 2002 and hit number one in more than ten countries. In 2003 the singer played three concerts in Knebworth to crowds of more than 125,000 people each nights, making it the largest music event in history.

In 2004 the singer released a Greatest Hits album which debuted at number one and became the best-selling album of 2004 in the UK. After touring to promote his Greatest Hits album Williams began work on his sixth album ‘Intensive Care’ which was released in 2005. His subsequent world tour broke records with 1.6 million ticket sales in a single day.

In 2006 the singer released a dance/electro album ‘Rudebox’ which received mixed reviews but became the fastest selling album in Europe in 2006. In November 2009 the singer released the album ‘Reality Killed the Video Star’ and releaed a compilation album ‘Songbook’ in the same year.

In 2010 the singer released his second greatest his album to celebrate his 20 year anniversary as a performing artist. In 2011 the singer signed a contract with Island Records and debuted as the opening act of the Diamond Jubilee Concert which was held outside of the Buckingham Palace in 2012. A new album ‘Take the Crown’ debuted in the top spot on the UK albums chart and became the singer’s number one album. The album’s lead single ‘Candy’ became the singer’s firstnumber one single since ‘Radio’ and his seventh number one single. The song sold more than 137,000 copies in its first week. In November 2012 he announced that he would be embarking on a 17 date stadium tour throughout Europe.

In 2018 he gave a performance at the 2018 FIFA World Cup Ceremony where he performed the songs ‘Let me Entertain You’, ‘Feel’ and ‘Angels’. In 2019 the singer announced that he would be releasing the album ‘The Christmas Present’.