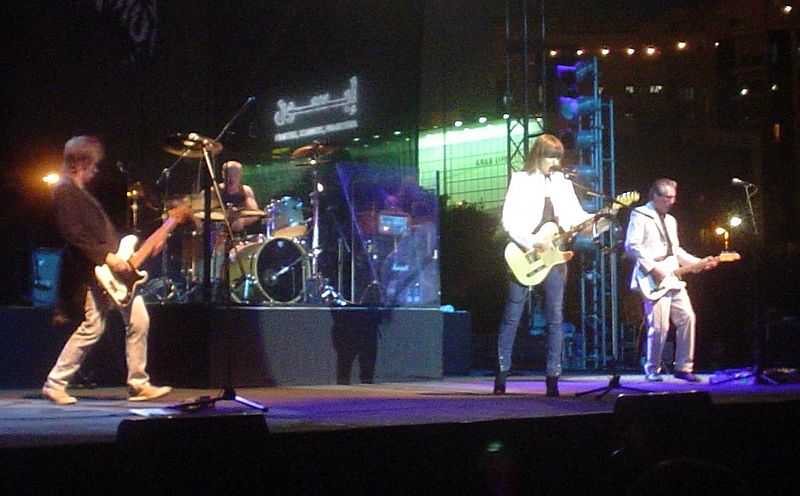 The Pretenders are famous for being an English-American band first formed in 1978, they have a rock sound. The band line-up originally consisted of songwriter, lead vocalist and rhythm guitarist Chrissie Hynde, lead guitarist, backing vocalist and keyboardist James Honeyman-Scott, bass guiatarist Pete Farndon and drummer and percussionist Martin Chambers. After both Honeyman-Scott and Farndon passed away due to drug related incidents the band was subject to a number of line-up changes and Hynde has remained the only consistent member of the band. The band has had a number of hit songs including ‘Brass in Pocket’, ‘My Baby’, ‘I’ll Stand By You’ and many more. They were inducted into the Rock and Roll Hall of Fame in 2005.

The Pretender’s first ever single was a cover of the Kinks song ‘Stop Your Sobbing’, the song was released in 1979 and quickly gained the band positive attention. They followed the single up with the song ‘Kid’ in 1980 before reaching number one in the UK with the song ‘Brass in Pocket’ which also became successful on the UK charts. The band released their own self-titled album in January 1980, it became both a critical and commercial success in the UK and the US. They gave a performance at the Heatwave Festival close to Toronto in the same year.

The following year they  released an EP titled ‘Extended Play’ which became a success in both the UK and the US with the songs ‘Message of Love’, ‘Talk of the Town’, ‘Porcelain’, ‘Cuban Slide’ and a lice recording of the song ‘Precious’  which they recorded in Central Park.

The band’s second studio album was titled ‘Pretenders II’ and it was released in August 1981, the album included the singles from their EPP and their music video ‘Day After Day’ became popular on MTV whilst the tracks ‘The Adulteress’, ‘Bird of Paradise’, ‘Bad Boys Get Spanked’ and ‘The English Roses’ received regular airplay on the radio.

In September 1981 the band made an appearance on the US late night sketch comedy television show ‘Fridays’ where they performed their single ‘The Adulteress’ as well as ‘Message of Love’ and ‘Louie Louie’.

Around the same time, Farndon’s drug use was increasing and he was fired from the band in June 1982 after a meeting between band members Hynde, Honeyman-Scott and Chambers. Only two days later Honeyman-Scott died away due to heart complications from cocaine use, he was only 25 years old at the time. The following year Farndon, who was in the process of forming a new band, with former Clash drummer Topper Headon, Guitarist Henry Padovani, Organist Mick Gallagher and singer Steve Allen, was discovered dead by his wife after he had taken heroin and passed out in the bathtub where he drowned. The musician was only 30 years of age at the time, he was buried at St. Peters Church in England.

With only two surviving members The Pretenders were forced to regroup and search for new members. A team was assembled with Hynde, Chambers guitarist Billy Bremer and bassist Toby Butler to record a new single ‘Back on the Chain Gang’, it became successful in the United States, peaking at number five on the charts. The single turned out to be their biggest success in the United States. The B-side of the song was titled ‘My City Was Gone’ became the theme music for The Rush Limbaugh Show.

Frontman, Hynde then set up a more permanent line-up, adding Robbie McIntosh on guitar and bassist Malcolm Foster, and keeping Chambers onboard. The new line-up’s first single was ‘Middle of the Road’ which was released in 1983 and reached the top 20 in the US. The band’s third album ‘Learning to Crawl’ was released in 1984. The following year the band played at the Live Aid concert and began recording their next album shortly after, although Hynde fired Chambers from the band after recording only one track. Demotivated after losing Chambers, Foster also quit the band and remaining members Hynde and McIntosh recorded the remainder of the album in sessions around New York and Stockholm. Towards the end of recording, Hynde hired two guest players, T.M Stevens on bass and drummer Blair Cunningham as the new rhythm section of the band. The album ‘Get Close’ was released in 1986 and included the top ten singles ‘Don’t Get Me Wrong’ and ‘Hymn to Her’ which went to number 8 in the US, as well as ‘My Baby’ which reached the number one spot on the mainstream rock charts in the US. The album’s track ‘Where Has Everybody Gone?’ was also released on the soundtrack of the film ‘The Living Daylights’ from the Bond franchise.

Whilst touring for ‘Get Close’ Bernie Worrell was added to the live line-up as a keyboardist. Hynde became worried during the tour that the band had strayed too far from its beginnings as a new wave band and partway through the tour decided to fire both Stevens and Worrell. Foster was reinstated on bass whilst Rupert Black was brought back to the band on the keyboard.

At the end of the tour in 1987, McIntoch left the band and was replaced by Johnny Marr. The Pretenders continued to tour and in 1987 released the compilation album ‘Pretenders – The Singles’. The band shifted into hiatus in 1989 and most of 1990, with most members sick of the upheaval.

In 1990 Hynde hired new session players and the band recorded a new album, titled ‘Packed!’. Hynde was the only official member of the band at the time, the album had one top 40 hit in Canda but did not perform well anywhere else.

The band released a new album ‘Last of the Independents’ in 1994, it received gold certification in the US.

The band was inducted into the Rock and Roll Hall of Fame in 2005. Whilst touring, bassist Hobson left the band and was replaced by Nick Wilkinson. In the same year Rhino Records released a DVD box set that spanned their entire career, called ‘Pirate Radio 1979-2005’. The band released the album ‘Break Up the Concrete’ in 2008. The album was the band’s first top 40 album in more than twenty years.

In 2011 the band performed live on CMT Crossroads with Faith Hill. The following year they were featured on the entertainment line –up for the 2012 Singapore Grand Prix.

In 2016 Stevie Nick announced that she would be touring with the band throughout 27 cities for the final three months of 2016. The band consisted of Hynde, Chambers, Heywood, Walbourne and Wilkinson at the time. The band released a new album titled ‘Alone’ in 2016, once again Hynde was the only official band members and the only one featured on promotional materials, the backing music was played entirely by session musicians. In 2011 the band continued touring throughout Australia and New Zealand with Stevie Nicks. The band also appeared on Austin City Limits.