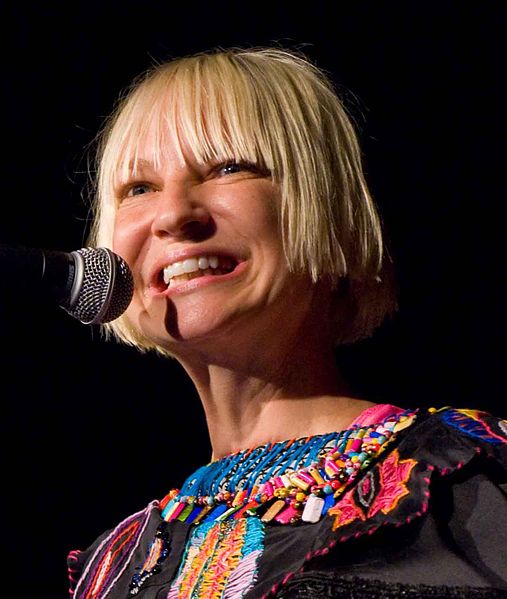 Sia Kate Isobelle Furler, usually just known as Sia in her career is famous for being an Australian singer, songwriter, voice actress and music video director. She first began her career as a singer in the band Crisp which performed acid jazz music in the mid-90s in Adelaide. When the group disbanded in 1997 she began her solo career before moving to London to join the duo ‘Zero 7’. The singer finally began to achieve fame after she relocated to New York City, although she has expressed discomfort with her growing fame and she stepped away to song write for other famous artists.

The singer’s fame continued to grow with her sixth studio album, although since its release she has begun to wear a wig to help obscure her identity. She has had a number of number one and top ten singles over the course of her career and won many awards, including close to a dozen ARIA Awards, nine Grammy Award nominations and one MTV Video Music Award.

Sia is the daughter of Phil Colson, a musician, and Loene Furler and art lecturer. As a child she was influenced by the likes of Aretha Franklin, Steve Wonder and Sting and she began her career in the mid-1990s with the acid jazz band Crisp where she contributed vocals. After the band broke up she produced her own album ‘OnlySee’, the album sold around 1,200 copies. The singer then moved to London and began performing as a background singer for the band Jamiroquai and she also joined the group Zero 7. The singer contributed vocals to Zero 7’s album ‘Simple Things’ including the song ‘Destiny’ which made it to number 30 on the UK charts. By 2006 she was believed to be the group’s unofficial lead singer. In addition to her work with Zero 7 she also worked on her own solo career. In 2000 the singer signed a recording contract with Sony’s Music and released a single titled ‘Taken for Granted’ which went to number ten. The following year she released her second album ‘Healing Is Difficult’, the lyrics of the album dealt with the singer’s first love affair. Unhappy with the way the album was being promoted, the singer fired her manager and signed with Go Beat! Instead. The singer won the breakthrough songwriter award at the APRA Awards in 2002.

Sia released her third album in 2004; titled ‘Colour the Small One’ the album included acoustic and electronic backing tracks and spawned a number of singles. The single ‘Breathe Me’ made the charts in the UK, Denmark and France. Frustrated with the lack of promotion around the album the singer decided to move to New York City in 2005, during that period of time the song ‘Breathe Me’ was featured in the final scene in the HBO television series Six Feet Under and as a result her manager set up a tour around the country.

In 2007 the singer released a live album called ‘Lady Croissant’ which included a number of songs from a performance that she gave at the Bowery Ballroom in New York. The following year she officially left Zero 7 on good terms and released her fourth album ‘Some People Have Real Problems’. The album reach number 41 on the charts in Australia and received Gold certification, it peaked at number 26 in the United States. The song ‘The Girl You Lost to Cocaine’ peaked at number eleven in the Netherlands and number twelve in Spain, it also reached number eight on the US Hot Dance Club songs.

The following year the singer release a DVD titled ‘TV is My Parent’ is was a live concert recording of a performance she had given at New York’s Hiro Ballroom. She was also approached by Christina Aguilera to write songs for her upcoming sixth album, ‘Bionic’. She also co-wrote the song ‘Bound To You’ for the film Burlesque which starred Aguilera and Cher. The song earned Sia a nomination for Best Original Song at the 68th Golden Globe Awards. In 2011 the singer made an appearance on the show The Voice, as an adviser to Christina Aguilera who was a vocal coach and judge on the show.

In the same year the singer released her fifth album ‘We Are Born’ which peaked at number two on the ARIA Albums chart, the album was certified gold and it’s release came after the release of a number of  singles; lead single ‘You’ve Changed’ which reached number 31 on the Australian charts, ‘Clap Your Hands’ which peaked at number 17 in Australia. The singer won to ARIA awards to during the 2010 ARIA Music Awards ceremony, including Best Independent Release and Best Pop Release, joining legends like Michael Jackson

. In 2011 the singer began her We Meaning You’ Tour throughout North America and Europe, the tour was followed by her ‘We Are Born’ tour throughout Australia and North America. She released a Greatest Hits album the following year, it was titled ‘Best Of…’

With the growing success of her album ‘We are Born’ the singer began to grow uncomfortable with her rising fame and later admitted that she wanted a private life. She began wearing a mask on stage and refusing to promote her tour, she also became more reliant on drugs and alcohol to cope and considered suicide. She hired a new manager who suggested that she make a change and start writing songs for other artists. The singer subsequently retired from her work as a recording artist and started a new career as a songwriter. She wrote the song ‘Titanium’ for Alicia Keys, although it was later sent to David Guetta who used Sia’s demo vocals on the song. The song peaked in the top ten in a number of countries and left the singer unhappy as she was trying to leave her singing career behind her. She co-wrote with a number of other artists including Beyonce, Kylie Minogue, Flo Rida and Rihanna.

In 2013 the singer released the song ‘Elastic Heart; with The Weeknd and Diplo and the following year released a new album ‘1000 Forms of Fear’. The album debuted at number one on the US charts and was certified Gold by 2015. The record reached number one in Australia and made it to the top ten of a number of other countries. The album had sold almost 1 million copies around the world by 2016. The lead single of the album ‘Chandelier’ was released in March 2014 and peaked at number eight in the US. The song was commercially successful in a number of other counties including Australia and other European countries. In 2015 the singer released a version of ‘Elastic Heart’ that only included her vocals, it reached the top 20 in the US. At the Grammy Awards ceremony it received four nominations including; record of the year, song of the year, best pop solo performance and best music video.

Whilst touring for the album the singer would perform only facing away from the crowd or behind oversized platinum wigs. In most promotional material for the album the dancer Mddie Ziegler was used as a stand-in for the singer, wearing similar wigs and appearing in the singer’s music videos. Three of the singer’s music video received more than 3 billion stream on Vevo. She was questioned about her desire to hide her face and said that she was trying to ‘maintain some modicum of privacy’. The singer wrote songs for the soundtrack of the 2014 film adaptation of Annie and received a nomination for Best Original Song at the Golden Globe Awards in that year.

In 2015 Sia announced her next album ‘This is acting’ and followed it up with the release of the singles ‘Bird Set Free’, ‘One Million Bullets’, ‘Cheap Thrills’ and ‘Reaper’. The single ‘Cheap Thrills’ made it to number one on the charts. In 2016 she gave a critically acclaimed performance at the Coachella festival. She also contributed vocals to the film ‘Finding Dory’. In the same year she released the single ‘The Greatest’, the accompanying music video received 8 billion views.

The singer embarked on her ‘Nostalgic for the Present’ tour throughout North America and gave performances where she let dancers take centre stage, it was well received by audiences.

In 2017 the singer released the album ‘Everyday is Christmas’ and collaborated with Diplo on four songs for his album LSD.