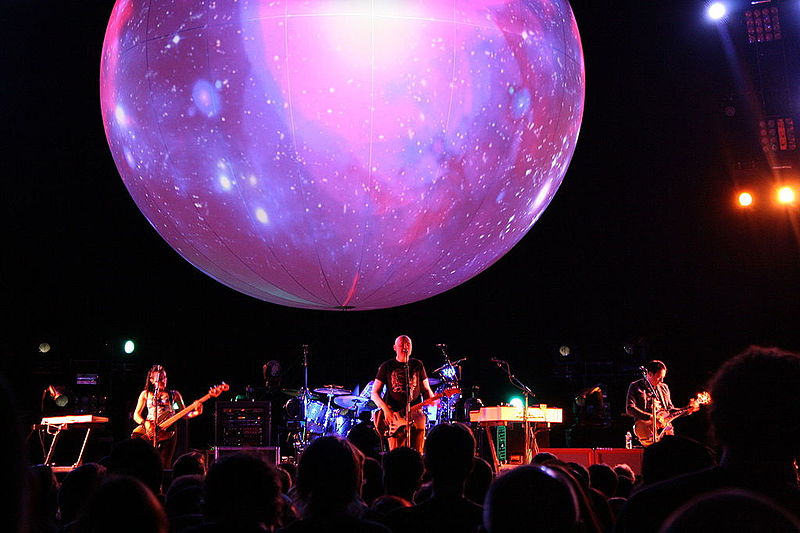 The Smashing Pumpkins are famous for being an American alternative rock band first formed in Chicago, Illinois. The band was originally founded in 1988 with lead vocalist and guitarist Billy Corgan, bass player D’arcy Wretzky, guitar player James Iha and drummer Jimmy Chamberlin. The band has since undergone substantial line-up changes and currently includes Corgan, Chamberlin, Iha and Jeff Schroeder as the guitarist.

The band has rejected the punk rock influences that many alternative rock bands base their sound on. The band’s sound contains elements of gothic rock, heavy metal, dream pop, psychedelic rock, progressive rock, shoegazing and electronica. The band first broke into the mainstream consciousness with their second album and has since gone on to become one of the most commercially successful bands of the 1990s.

After the break-up of his gothic rock band in Florida, Billy Corgan relocated to him hometown Chicago and took a job at a record store where he came up with the idea for a new band called Smashing Pumpkins. Whilst working at the store he met guitarist James Iha and the duo began writing music together and performed live for the first time at Chicago 21, a Polish bar.

Not long after they met D’arcy Wretzky, a bass guitarist who was recruited into the band. The trio played a show at the Avalon Nightclub and the owner of Cabaret Metro agreed to book them if they added a drummer to the line-up. Jimmy Chamberlain was recommended by a friend, he was a jazz drummer and ultimately changed the direction of the band’s sound.

The band created their first compilation island in 1989 and released their first single ‘I Am One’ in 1990 with a local Chicago label. The single sold out and the band brought out a follow up single called ‘Tristessa’ and they were subsequently signed to Caroline Records. The band recorded their debut album ‘Gish’ in 1991 at a cost of $20,000. Corgan insisted on playing all the instruments except the drums on the record to keep the sound consistent, this caused tension in the band.

The album became a minor success with some of the singles achieving some airplay on the radio. After the release of the album the band released an EP titled ‘Lull EP’ in October 1991 and then signed up with Virgin Records. The band performed as an opening band for the Red Hot Chili Peppers, Jane’s Addiction and Guns N’ Roses on tour however Iha and Wretzky whom were dated broke up whilst on tour. Chamberlain also fell into addiction and Corgan became depressed and was living in a parking garage.

The rising popularity of the alternative rock music in the United States meant that the band was poised for major commercial success and they began work on their second album in late 1992. The band moved to Georgia to record the album to help them focus and to cut Chamberlain off from his drug connections but the recording of ‘Siamese Dream’ hurt the bands relationship. The record took four months to complete and the budget ended up being more than $250,000. The album reached number ten on the charts and sold more than four million copies in the United States. The rising recognition of the band saw them gain some criticism from the indie community who saw them as sell-outs.

In 1995 Corgan wrote a number of songs and the band returned to the studio to create a double album. The album was intended to be a conceptual album about life and death. The album was well received, ‘Mellon Collie and the Infinite Sadness’ debuted at number one on the Billboard 200 charts in 1995 and eclipsed the success of ‘Siamese Dream’. The album was certified ten times platinum and became the best-selling double platinum of the 90s. The album received a number of nominations at the 1997 Grammy Awards and earned the band the award for Best Hard Rock Performance.

The band embarked on a world tour in 1996. They received a lot of attention at the time, appearing in the Simpsons and getting extended airplay on MTV.

In 1996 the band suffered a tragedy when keyboardist Jonathon Melvoin and Chamberlin both overdosed on heroin. Melvoin died whilst Chamberlain was arrested and fired from the band. The band continued touring and hired drummer Matt Walker and keyboardist Dennis Flemion to finish out the tour. Corgan later acknowledged that continuing the tour had impacted on the bands music and reputation.

The band released the song ‘Eye’ in 1997 which was a drastic shift in musical style for the band, using mostly electronic style music. The bands next album, 1998’s ‘Adore’ was a shift from the bands rock style to electronica style music. The band also shed their rock and roll image for a more subdued style. The album did not sell as well in the United States as previous albums had but it did sell well overseas. The subsequent tour was funded entirely by the band with all proceeds being donated to charities.

In 1999 the band reunited with Chamberlin, however Wretzky left shortly after. Bassist Melissa Auf Der Maur was recruited to replace her. The band released the album ‘Machina’ in 2000, the album had a more tradition alternative rock sound.

In the same year it was announced that the band planned to break up at the end of the year. The Smashing Pumpkins played a farewell concert at The Metro in Chicago, giving a four and a half hour show and releasing a single ‘Untitled’ to coincide with the show.

Following their breakup they released the compilation album ‘Rotten Apples’ in 2001 and a B-Side and rarities album ‘Judas O’. The band also released a Greatest Hits Video Collection album at the same time. In 2001 Corgan and Chamberlin reunited to work on the supergroup Zwan, which only released one album titled ‘Mary Star of the Sea’. Corgan released a solo album ‘TheFutureEmbrace’ in 2005, the album received mixed repsonses and did not achieve commercial success. Corgan insisted that the band would not get back together and Corgan hit out at Iha, blaming him for the break-up of the band.

In 2005 Corgan took out a full page ad to announce that he planned to get the band back together. Corgan and Chamberlin were confirmed to be taking apart but in 2007 Iha and Auf der Maur both said that they would not take part. It was also confirmed that Wretzky didn’t want to be involved. The band performed for the first time since 2000 in Paris, France in 2007. The line-up included guitarist Jeff Schroeder, bassist Ginger Reyes and keyboardist Lisa Harriton. The bands new album ‘Zeitgeist’ which entered the charts at number two.

In 2009 it was announced that Chamberlin had left the band. The band announced that they had plans to release a 44-track album titled ‘Teargarden by Kaleidyscope’ which would be released over the internet one track at a time. The band began touring in 2010 with its new line-up.

In 2011 the band announced that they would release the album ‘Oceania’, the album was released in 2012 and debuted at number four in the US.