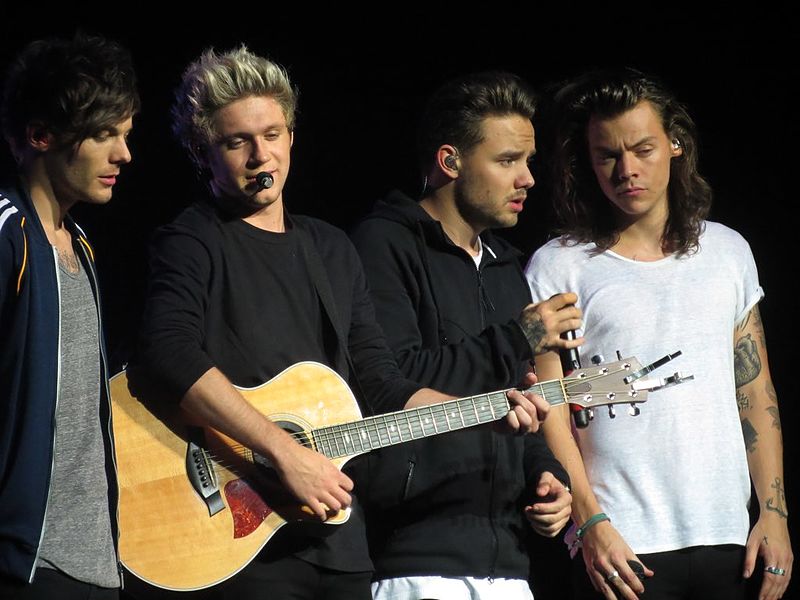 One Direction is famous for being an English boy band first formed in London in 2010. The band was formed by members Niall Horan, Liam Payne, Harry Styles, Zayne Malik (who left the band in 2015) and Louis Tomlinson. The band first shot to fame following their appearance on the The X-Factor television series, they were signed to Simon Cowell’s label Syco Records after finishing in third place.

The group has been highly awarded and has earned many accolades since first rising to fame, over the course of their career they have won nearly 200 awards including seven Brit Awards, four MTV Video Music Awards, six Billboard Music Awards, seven American Music Awards and 28 Teen Choice Awards. As of 2020 the band has sold more than 50 million records around the world, they are currently on hiatus.

In 2010 Niall Horan, Zayn Malik, Liam Payne, Harry Styles and Louis Tomlinson all audition separately as solo candiates for the British television series The X-Factor. They failed to progress alone but were put together to form a five-piece band and qualified for the ‘groups’ category of the competition. The group got to know each other of the course of two weeks and began to get to know each other.

Styles was the one to think of the name for the band and their first song as a band was an acoustic cover of the song ‘Torn’. The group quickly gained positive attention in the UK and after placing third began recording their debut album after signing to Cowell’s record label. The band participated in the X Factor Live tour and performed in front of 500,000 people across the UK.

The band’s debut single was released in 2011, titled ‘What Makes You Beautiful’ the song was a commercial and international success, reaching number one in the UK. Their following singles ‘Gotta Be You’ and ‘One Thing’ both also peaked in the top ten on the UK charts. The band signed a deal with Columbia Records in North America and they released their debut studio album ‘Up All Night’ in the same month. The album was the fastest selling album of 2011 and the band went on tour to promote it.

The band began the North American leg of their tour in 2012 and then announced that an Oceania leg had been added to their tour. The band’s debut album reached number one in the United States, making them the first UK band to have an album reach number one in the US and getting them an entry into the Guinness Book Of World Records. The album went on to top the charts in sixteen countries. The album sold 4.5 million copies around the world by the end of 2012.

The bands ‘Up All Night Tour’ included 62 shows and it was met with positive praise from critics and fans. The shows sold out within minutes and the tour was highly commercially successful. The band released a recording of one of the tours concerts in May 2012, the DVD ‘Up All Night: The Live Tour’ topped the charts in twenty-five countries and had global sales of more than one million copies after only three months.

The band released a book titled ‘Dare to Dream: Life as One Direction’ in the United States in 2012, the book topped The New York Times Best Seller list. The band performed at the 2012 Summer Olympics in London and won the most awards during the 2012 MTV Video Music Awards. In 2012 an American band filed a lawsuit against One Direction claiming that the band had infringed on their trademark rights. The band claimed that Syco and Sony Records had knowingly infringed on them. The companies countersued and won the legal dispute, ensuring that One Direction kept the right to use their name and forcing the other band to change their name.

In 2012 the band released the lead single for their second album, titled ‘Live While We’re Young’ the single was a success worldwide, reaching the top ten in almost every country it charted in. The bands second single ‘Little Things’ went to number one in the UK. One Direction released their second studio album ‘Take Me Home’ in November 2012. The album reached number one in more than 35 countries and made the band the first boy band in US history to have two number one albums in the same year. The album sold more than 540,000 in its first week in the US alone and sold more than 4.4 units around the world.

The album was written by groups of songwriters and each track averages five songwriters. The album artwork features the band in front of a British red telephone box. The album received mixed reviews from critics.

The band performed in front of Queen Elizabeth II during the 2012 Royal Variety Performance and headlined at Madison Square Garden. One Direction toured throughout 2013, appearing for 123 shows in Europe, North America, Asia and Oceania. The band sold300,000 tickets in their first day for the UK leg of their tour and ticket sales in Australia and the UK totalled more than US$15.7 million with eighteen sold out shows. In all, the band sold more than 1,635,000 tickets and grossed more than $114 million.

The band released the lead single for their third album in 2013. Titled ‘Best Song Ever’ the song became the bands highest rated single in the US and broke the Vevo record with 10.9 million views on Youtube within 24 hours. In 2013 the band released a 3D documentary film called ‘On Direction: This is Us’, the film was commercially successful and grossed more than $60 million worldwide.

The band announced their upcoming Where We Are Tour in May 2013, the tour sold out in minutes and the band added additional dates to the tour. In late 2013 they released their third album ‘Midnight Memories’ and the band took part in a day dedicated to their fans titled ‘1D Day’. Over the course of the day the band participated in a live stream Youtube show which included live performances, and a number of celebrity guests.

One Direction’s third album debuted at number one in the UK and the US. At the end of the year the band broke sales records with their DVD release of ‘This Is Us’. The film sold more than 270,000 copies within just three days of its release. The bands ‘Where We Are’ tour began in 2014 and ended after 69 shows which grossed $290 million, making it the highest grossing tour of the year.

In July 2014 the band released the concert film ‘One Direction: Where We Are – The Concert Film’. A few months later they announced their fourth album would be released at the end of the year. The lead single for the album, ‘Steal My Girl’ was released in September 2014. The singled was certified platinum. The album was released in November 2014 and debuted at number one in 18 countries. The band began touring again in 2015 but announced that Malik had left the band only two months into their tour.

Mid-way through 2015 the band released the single ‘Drag Me Down’, the song topped the charts in a number of countries despite a lack of promotional material. The band released their fifth album ‘Made in the A.M’ on November 2015. The album topped the charts in the UK and a number of other countries and went to number two in the US. The band won the award for Artist of the Year and announced that they were going on hiatus, Louis Tomlinson confirmed that they planned to take a break of approximately 18 months.

In 2016 it was announced that the bands break may become a permanent break up after a source advised that the groups remaining members had not renewed their contracts after their 2015 tour. Every member of the band had released their own solo work by May 2017 and no news of any new One Direction work in the works has been announced. In 2018 it was reported that the bands touring company had been folded.