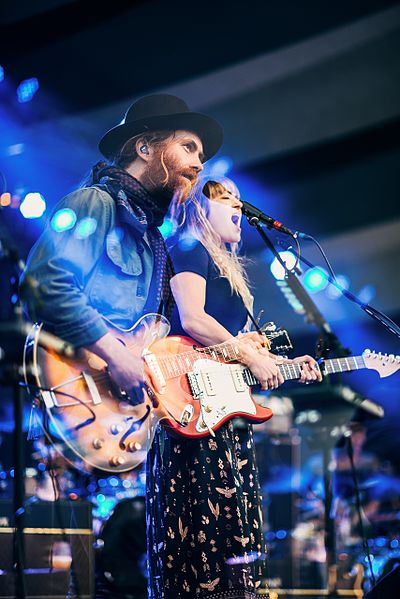 Angus & Julia Stone are famous for being an Australian folk and indie pop group, first formed in 2006 by brother and sister duo Angus and Julia Stone. The brother/sister pair have released four studio albums over the course of their career and achieved a great deal of success in Australia. In 2010 the duo received nine nominations at the ARIA Music Awards and won five awards including Album of the Year, Best Adult Alternative Album, Best Cover Art and Producer of the Year as well as Single of the Year for their song ‘Big Jet Plane’. Each sibling has also issues a solo album.

Angus and Julia Stone are the children of Kim and John Stone, born in Sydney both siblings were influenced by their parent’s interest in music. They both grew up alongside their eldest sister, Catherine in the Sydney suburb of Newport, in the cities Northern Beaches area. They went to Newport Primary School and later Barrenjoey High School and in their teen years Angus began to write his own music, often pop songs. After he finished school he started work as a labourer and began to learn guitar whilst he was recovering from a snowboarding accident, Julia was a trumper teacher during the same time.

After a year away for travel, Julia returned home to Australia and began to perform with her brother. By 2005 her brother had begun to perform at open mic nights, with his sister sometimes performing backing vocals for his songs. The duo’s first gig was at the Coogee Bay Hotel, where they performed the song ‘Tears’ written by Angus. Around that time, Julia had also begun to write her own music and the pair often played split sets, with each sibling providing the backing vocals for the others songs.

In early 2006 the duo made the decision to collaborate on their music and they began to work together on composing new songs. They would often each write their own lyrics before working together on the harmony and structure of the song. Early on music journalist Ed Nimmervoll commented on the romantic, confessional nature of Julia’s songs and the more guarded, pop-oriented sound of Angus’s songs.

Each sibling has their own distinct vocal style, with Julia being compared to Jolie Holland and described as ‘fractured, girly and theatrical’. Her voice lends itself well to the folk genre that the duo perform it, with Nimmervoll acknowledging that it’s sound was en vogue for many alternative folk artists, although he offered that he believed she would struggle to distinguish herself vocally when solo. Luckily she plays well off of Angus, whose voice has been compared to Paul Simon and is well liked for its Australian-drawl style. The siblings’ songs are often described as warm harmonies, and the content and sound of their songs are often wistful and introspective.

In 2006 the duo recorded their debut extended play titled ‘Chocolates and Cigarettes’, the name was chosen by Julia because she said she like both, but was trying to quit cigarettes. The EP was recorded with Julia on vocals, guitar and trumpet and Angus on vocals and guitar. Their friends and Julia’s boyfriend at the time, Connelly, joined them; Mitchell Connelly from the Beautiful Girls played drums and percussion for the duo, whilst Clay MacDonald (who was also from The Beautiful Girls) played bass guitar and Hanna Oblikov played the cello. Both Connelly and MacDonald left their band permanently to back the duo during live sets. Angus & Julia Stone’s first single ‘Paper Aeroplane’ was played on the radio in Australia and in the same month the duo performed at The Great Escape festival. By July 2006 the duo had been invited to perform at Splendour in the Grass in Byron Bay, where they put on a show inside a tiny tent packed with more than two hundred people.

By the end of August the band signed a EP distribution deal with Australia’s EMI Music and a local independent music label called Independiente Records in the UK. They relocated to London in the same month and released a six-track EP on the 26th of August, Ian Pritchett from The Beautiful Girls helped them produce it. During their time in the UK the duo were invited to record at Chris Potter’s studio, the Verve. They were also invited to Fran Healy’s home to record and as a result they released their second EP ‘Heart Full of Wine’ which included six tracks, the EP was released in 2007. Connelly again helped the duo with drums and percussion whilst this time James Perryman stepped in to helped with bass guitar and Bethany Porter was the celloist for the EP. By the end of the year the siblings has signed a worldwide deal with publisher Sony/ATV Music Publishing. Creative Artist Agency also became the duo’s UK- European agent in the same year.

Whilst in London Healy assisted the duo with songs that would later become part of their first album, ‘A Book Like This’. With a knowledgeable producer to support them the siblings work on Healy’s lounge-room floor, developing songs and using vintage instruments and microphones. The remainder of the album’s tracks were recorded in their mother’s home in Newport with the help of Pritchett. In 2007 Angus & Julia Stone started the year performing at the Big Day Out Festival. In February the duo played their first tour around Australia, it sold out and in the same month a double-pack of their first EP was released in Australia and The UK. The EP reached number 12 on the UK charts and the EP’s single ‘Private Lawn’ earned the title of single of week on BBC Radio 2. In March the siblings were signed to the William Morris Agency in the US and performed at the Great Escape Festival in Brighton.

In August 2007 the duo released the track ‘The Beast’ which reached the top 50 on the ARIA singles charts, eventually peaking at number eight. The duo finally released their debut album ‘A book like this’ in September, it peaked at number six on the charts and was certified platinum by 2008 after selling more than 70,000 units. The siblings spent the remainder of 2007 touring Australia and Europe.

They began 2008 at the New Year’s Eve Falls Festival before heading back to support Newton Faulkner and to perform a sold out show at the Scala. Two of their tracks, ‘Wasted’ and ‘The Beast’ were listed on the Triple J Top 40 in 2007. In 2009 their album was released in the United States and the duo performed with Brett Dennen around the US. By April of 2008 however they decided to take break from their performing and recording schedule to work on solo project. During this time Angus released his debut album ‘Smoking Gun’, one of the tracks ‘Big Jet Plane’ was later re-recorded by the siblings as a duo for Angus & Julia Stone and released in 2010.

The duo spent most of 2009 working on their second album ‘Down the Way’, it was mixed by Kieran Kelly from Midnight Youth. In 2009 the siblings made an appearance on Triple J’s Dools show to premiere their single ‘And the Boys’ and announce the release of their second album which would coincide with an Australian tour. Their second album debuted at number one on the ARIA Charts and in April 2010 the duo began touring through the UK and performing at a number of sold out venues. The following month the pair released the ‘Big Jet Plane EP’ which peaked at number 21 in Australia. The song ‘Big Jet Plane’ won to place on Triple J’s Hottest 100 Australia Day playlist in 2011.

In 2011 the duo announced that they were working on material for a third album. They began the year with performances at the Big Day Out Festival, and later a performance at Coachella and a tour through Europe.

In September of that year they contributed the track ‘Love Will Take You’ to the Twilight Saga sound track. In 2012 they announced that they had shelved their third album.

In 2014 they began work with Rick Rubin on a new album. They released their album ‘Angus & Julia Stone’ in August 2014, the single ‘Heart Beats Slow’ peaked at number 37 and the album reached the top ten in a number of countries. Their fourth album ‘Snow’ was released in 2017.