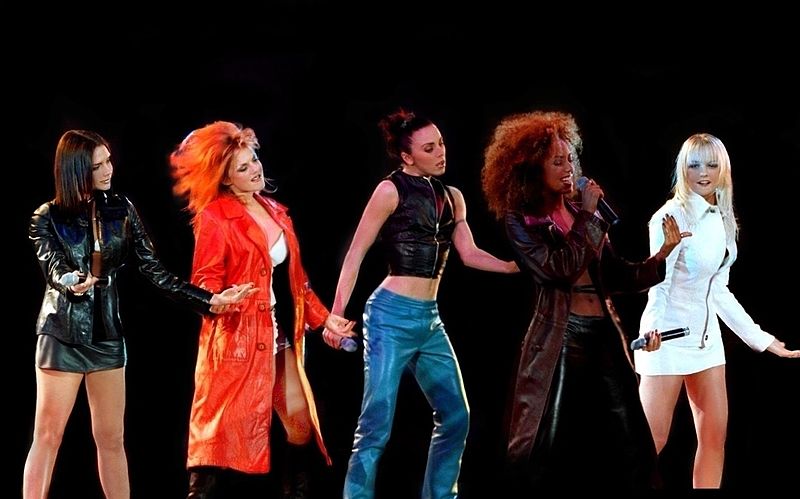 The Spice Girls are famous for being a UK pop girl group first formed in 1994. The group’s line-up included Melanie Brown (often known as Mel B or Scary Spice), Melanie Chisholm (known as Mel C or Sporty Spice), Emma Bunton (known as Baby Spice), Geri Halliwell (Ginger Spice) and Victoria Beckham (Posh Spice). The group shot to fame after releasing their debut single ‘Wannabe’ in 1996; the song reached number one in more than 37 countries and their first album sold more than 31 million units around the world, making them the best-selling girl group in history. They are also one of the most successful pop groups in history and were one of the biggest British acts since The Beatles in terms of success.

Signs of the groups success include their incredible record sales, multiple reunion tours, large merchandise sales and a film, titled ‘Spice World’. The group is one of the most successful musical marketing ventures in history, earning sometimes more than $75 million a year – their total gross income was estimated to have been between $500-800 million by 1998. The group have become iconic and are almost as widely known and recognised as members of the Beatles. They are often touted as being a part of the second wave of the British Invasion of music in the US.

The group was started by Bob and Chris Herbert from Heart Management who decided that there was a gap for a girl group to compete with some of the popular boy bands which were dominating the pop music charts at the time. In the mid-90s they placed an ad in the magazing ‘The Stge’ looking for singers to audition for the band at the Danceworks Studios. More than 400 women attended the audition and were placed into groups of ten to dance to a routine before they gave a solo audition. After deliberating, Victoria Adams, Melanie Brown, Melanie Chisholm and Michelle Stephenson were chosen to return for a second round of auditions, Geri Halliwell was also asked to attend eve though she had missed the first audition. After the second audition they were asked to return an perform again solo and as a group, at which point Adams, Brown, Chrisholm, Halliwell and Stephenson were selected for the band which was initially called ‘Touch’. The group moved in together and began to practice songs throughout most of 1994, they worked on a number of demos and one of the songs ‘Sugar and Spice’ was the inspiration for their eventual name. The group worked on a number of dance routines together, Stephenson was eventually fired and replaced by Emma Bunton.

In the early stages the Spice Girls felt frustrated by their lack of a recording contract and worried about the direction their management company was taking them, so in 1994 they began to search for a management company and they set up a showcase and Herberts tried to set up a contract with them, but all of them delayed signed on advice from Victoria Adam’s family.

In March 1995 the group left Heart Management, it was alleged that they stole their own master recordings. They then got producer Eliot Kennedy to agree to work with them and were introduced to Simon Fuller at 19 Entertainment. The group eventually signed a deal with Virgin Records and officially chose then name Spice Girls. Mirror success to other pop artists like Ariana Grande, but in the 1990s.

In 1996 the group released their debut single ‘Wannabe’ in the UK, the music video was shot on the set of the Pancras Grand Hotel and became instantly popular, receiving a great deal of airplay. The group made their debut appearance on the TV show ‘Surprise Surprise’ and gave their first interview to Paul Horman who acknowledged that they were about to shift the UK away from Britpop and into a more all-out pop era. The groups single entered the charts and number three before it peaked at number one, where it remained for seven weeks. The song was globally successful and reached number one in more than 37 countries and set the record as the biggest selling single by an all-female group in history.

The groups next single ‘Say You’ll Be There’ also topped the charts and their single ‘2 Become 1’ released in December became their first Christmas number one. The band released their debut album ‘Spice’ in November 1996. It was highly successful and became the best-selling album in history to be produced by an all-girl group. The album received 10 x platinum certification in the UK and peaked at number one on the charts, where it remained for 15 non-consecutive weeks. Upon its release in the US the album became the biggest selling of 1997 , peaking at number one it was certified 7x platinum and sold around 28 million copies around the world in total.

In the same month as the release of their album the group signed sponsorship deals with Pepsi, Walkers, Impulse, Cadbury and Polaroid.

The group won two Brit Awards in 1997 and Geri Halliwell’s choice of Union-Jack mini dress at the awards ceremony became an iconic moment in pop history. The group released their book ‘Girl Power!’ in 1997, it sold out its first print run in a  single day and was later translated into more than 20 languages. Later that year their next album ‘SpiceWorld’ was announced at the Cannes Film Festival.

In October 1997 the group released their first single from the their upcoming album, ‘Spice Up Your Life’ which went to number one. In the same month the Spice Girls gave their first live performance in front of more than 40,000 fans. The group’s second album ‘Spiceworld’ set records as the fast-selling album, selling more than seven million copies in under two weeks. The album sold more than 20 million copies around the world.

In 1997 the group fired their manager, Simon Fuller and many have since speculated that the group lost their direction following the firing.

In 1998 the group began their Spiceworld world tour which included both a European and North American leg. The group recorded the song ‘How Does It Feel (To Be On Top of the World)’ in 1998, the song was the last that Halliwell recorded with the group until 2007. Halliwell announced her departure in May 1998, it was major news around the world.

The group released a new song titled ‘Goodbye’ in 1998 as a tribute to Geri Halliwell, the song topped the charts and became the groups third number one Christmas single. In late 1998 it was announced that both Brown and Adams were pregnant – Victoria married her partner David Beckham later that year. The group returned to the recording studio in 1999 and released their album ‘Forever’ in 2000. The album received a poor response from critics and it peaked at number one on the charts. In 2001 the group announced that they would be going on a hiatus. In 2007 the group recorded a new single ‘Headlines (Friendship Never Ends)’ the song peaked at number eleven on the UK charts. The group embarked on a tour but cancelled their appearances in Beijing, Hong Kong, Shanghai, Sydney, Cape Town and Buenos Aires.