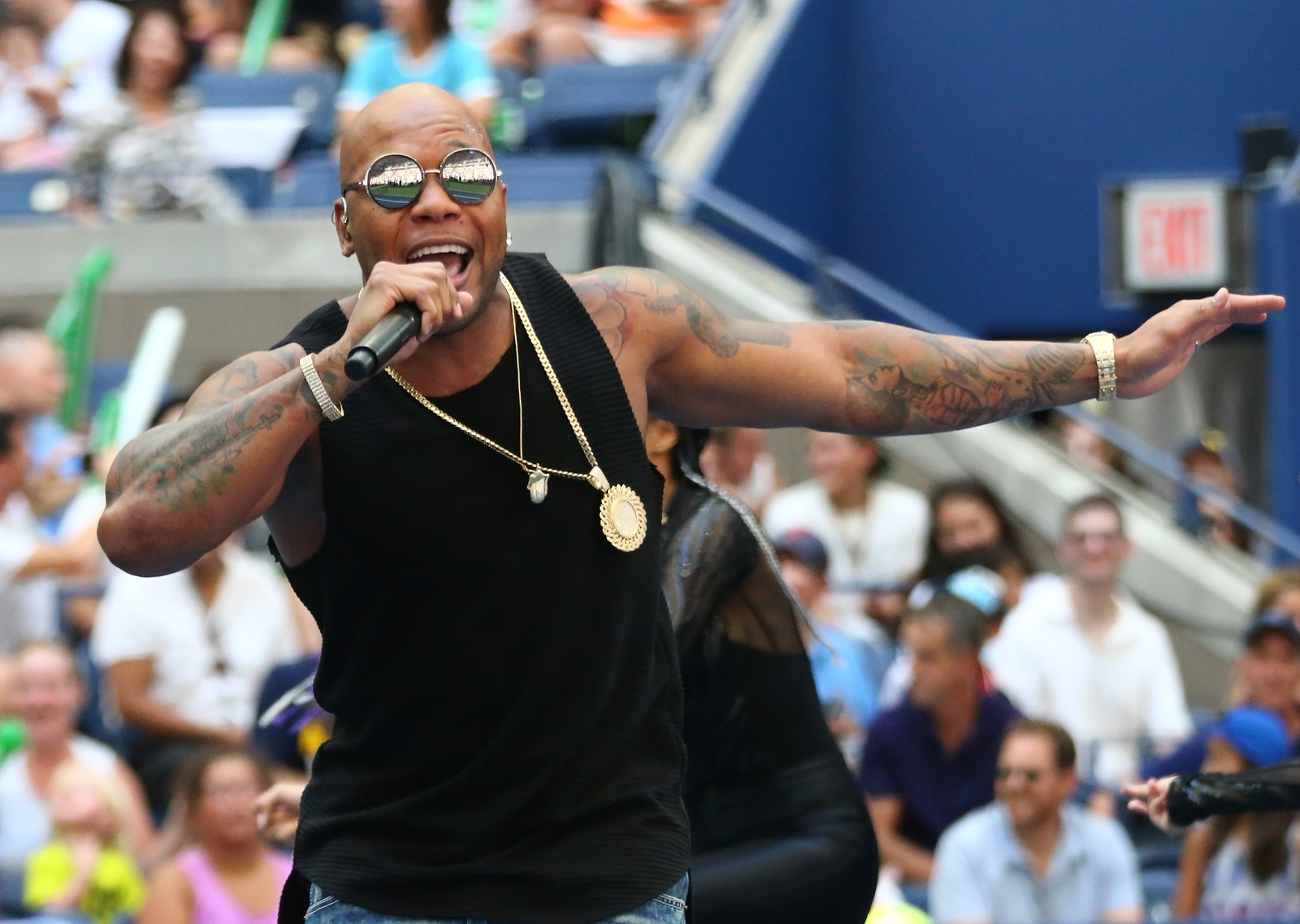 Best known by his stage name, Flo Rida, the singer’s full name is actually Tramar Lacel Dillard. Originally the singer was going by the stage name of Ruckus Pimp, but said he felt it was a little out there and brainstormed with a friend to come up with a new name, eventually choosing to base it on the place he’d grown up in; Florida.

The rapper was born on the 17th of September 1979, he is currently 40 years of age. He was born in Carol City, Florida.

Tramar Lacel Dillard was raised by his parents together with his seven siblings, one of whom died from bronchitis when he was young, the death greatly impacted on the young rapper. His brother-in-law is also the hype man for local Florida rap group 2 Live Crew.

The rapper attended school in Florida and whilst performing was noticed by Fresh Kid Ice from the 2 Live Crew who took him along to a show in Hawaii. The pair developed a long-lasting friendship and Flo Rida has said that he considers this period in life to be his ‘schooling’. The rapper and his group were later invited to appear on Fresh Ice Kid’s fourth album titled ‘Freaky Chinese’.

After he graduated from high school in 1998, Flo Rida studied business management at the University of Nevada, Las Vegas for two months, before attending Barry University for a further two months. He returned to Florida and decided to continue pursuing his music career after he received a call from an indie label called Poe Boy Entertainment.

The singer has purchased a home not too far from where he great up. The home has a basketball court painted with the colours of his favorite basketball team, Miami Heat, five bedrooms and five bathrooms. Each room features a tablet to control the temperature, music and lighting of the room. The home is set across 7,200 square feet and was purchased for $1,040,000.

The rapper is actually very tall, around 191 cm’s and weighs about 92 kg’s, he has a muscular frame due to heavy weight lifting.

Flo Rida is famous for being an American rapper, singer, and songwriter. The singer achieved success with his 2007 breakout song ‘Low’ which was number one on the charts in the US for 10 weeks. His subsequent albums also performed well and have made him one of the best-selling artists of all time. The singer has sold more than 100 million records worldwide; he has a catalog of hit singles under his belt.

The singer first signed with HotBoyz in 2000 and in 2004 began to affiliate himself with Southern hip hop artists like Cash Money, Rick Ross, Trina, T-Pain and Trick Daddy. His first big released was a single titled ‘Birthday’, featuring Rick Ross. He made his debut appearance on DJ Khaled’s album ‘We the Best’ in 2007 for the song ‘Bitch I’m From Dade County’.

The rapper’s big breakthrough came when he released his debut album ‘Mail on Sunday’ in 2008. The first single on the album was ‘Low’, featuring T-Pain. The single was included on the soundtrack of the movie ‘Step Up 2: The Streets’. The single peaked at number one on the Billboard Hot 100 chart. His single ‘Elevator’ featuring Timbaland, ‘In the Ayer’ featuring Will.i.am and ‘Roll’ featuring Sean Kingston also charted on the Hot 100 charts.

The track ‘Money Right’ featuring Brisco and Rick Ross, was set to be the fourth single but it was cancelled because of the upcoming release of Flo Rida’s second album ‘R.O.O.T.S’. He also recorded another collaboration with T-Pain but it did not make the final tracklist.

After the success of his debut album the rapper made guest performances on other rapper’s albums and singles; including DJ Laz’s ‘Move Shake Drop’, ‘We Break the Dawn’ by Michelle Williams, ‘4 Minutes’ by Madonna, ‘Running Back’ by Jessica Mauboy, ‘Feel It’ by DJ Felli Fel and ‘Speedin’ by Rick Ross. He also appeared on ‘So You Think You Can Dance’ and on DJ Khaled’s album ‘We Global’.

Nine months after the release of his album ‘Mail On Sunday’ the singer began recording his second album ‘R.O.O.T.S’. The album was released in March 2009. The first single titled ‘Right Round’ featured Kesha. The single gained traction on the charts quickly, jumping from the 58th place to the top spot in a single week in February 2009. The song broke a record for most digital sales in a single week in the US with more than 636,000 digital copies sold. The second single on the album ‘Sugar’ which featured the singer Wynter Gordon. The song peaked at number five on the Billboard Hot 100. The next single, ‘Jump’ featured Nelly Furtado and the fourth single, ‘Be On You’ featured Ne-Yo. The single ‘Available’ featuring Akon was also set to be released on iTunes, but the release was canceled. The album ‘R.O.O.T.S’ debuted at number eight on the charts and sold 55.000 copies in its first week of sales. The album sold 247,000 copies by the end of 2009 in the US and became the top-selling rap album of the year.

The rapper third album ‘Only One Flo (Part 1)’ was released in 2010. Ahead of the album’s released a promo single titled ‘Zoosk Girl’ featuring T-Pain was released. In June 2010, Flo Rida released ‘Club Can’t Even Handle Me’ featuring David Guetta, the song was the first official single from the album and was featured in the ‘Step Up 3D’ soundtrack. In late 2010 the singer released ‘Come With Me’ as the first promo single for the album, and ‘Puzzle’ which featured Electrixx. The track ‘Turn Around (5,4,3,2,1)’ was released as the second official single for the album, it debuted at number five in Australia. Following the release of the album in the UK the track ‘Who Dat Girl’ started to receive strong downloads and climbed to number 31 one the UK R&B charts. The rapper also made an appearance on the song ‘iYiYi’ by Australian singer Cody Simpson. In December 2010 the rapper began his own label, called International Music Group and signed rapper Brianna and Git Fresh.

The rapper’s fourth album ‘Wild Ones’ was released in 2012. The debut single on the album ‘Good Feeling’ was released in 2011. ‘Good Feeling’ samples Etta James’ song ‘Something’s Got A Hold On Me’ and after her death Flo Rida dedicated the song to her memory. ‘Good Feeling’ peaked at number three in the US and reached the top five in a number of other countries. The next singles released were the title track, ‘Wild Ones’ and ‘Whistle’. The single ‘Wild Ones’ reached number one in a number of countries and peaked at number five in the US, whilst ‘Whistle’ went to number one in twenty countries, peaking at the top of the charts even in the US.

In 2012 the singer appeared on a WrestleMania segment were performed some of his music. He released an exclusive Australian EP called ‘Good Feeling’ in April 2012. In September 2012 he performed his new song ‘I Cry’ on America’s Got Talent.

In 2014 the singer collaborated with TWiiNS on the song ‘One Night Stand’ he also made an appearance on the Nickelback album ‘No Fixed Address’.

In September 2014 the rapper released the first single from his new EP ‘My House’, the song was called ‘G.D.F.R’ and featured Sage the Gemini. The song reached the top ten in the US, becoming his tenth top ten hit in the United States. He released his second single, called ‘I Don’t Like It, I Love It’ in 2015, the track featured Robin Thicke. In October 2015 he released the song ‘My House’ which went to number four on the Hot 100 charts in early 2016.

In July 2016 he released the song ‘Zillionaire’ which was featured in the trailer of the movie ‘Masterminds’. At the beginning of 2017, his song ‘Cake’ went viral with the trending hashtag #CakeChallenge. In 2018 he released the single ‘Dancer’ and ‘Sweet Sensation’. In 2017 he announced that he was working on his fifth album, but it has yet to be released.

Flo Rida has an estimated net worth of approximately $30 million thanks to his successful music sales.