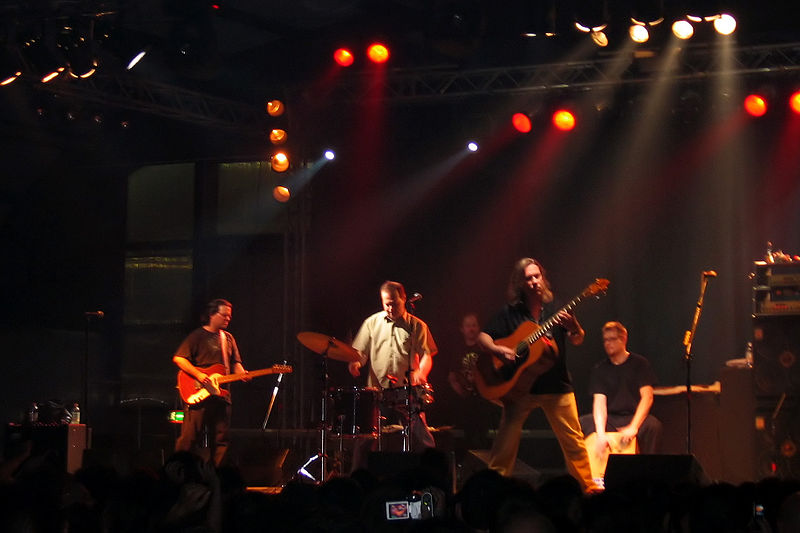 The Violent Femmes are famous for being an American folk punk band which first formed in Mikwaukee, Wisconsin. The band’s line-up consisted of singer, guitarist and songwriter Gordon Gano, bassist Brian Ritchie, Blaise Garza on saxophone and keyboard and drummer John Sparrow.

The band has released ten studio albums over the course of their career, after they found early success with their debut album in 1983. The self-titled album contained a number of well-known songs which have now become classics, including ‘Blister in the sun’, ‘Kiss Off’, ‘Add it up’ and ‘Gone Daddy Gone’. The band’s first self-titled album has been their most successful, earning them platinum certification and making them one of the most successful alternative rock bands of the 1980s. As of 2005 the band had sold around 9 million albums.

For a period of time after the release of their third album the bands future was in limbo and they split up for a year between 1987 and 1988 whilst members Gano and Ritchie went solo before regrouping to release a new album. Since getting back together the band has remained popular, especially in their home country the United States where their more recent songs ‘Nightmares’ and ‘American Music’ reached the top five in the Modern Rock Charts in the country.

The Violent Femmes were initially founded by bass guitar played Brian Ritchie and his friend, percussionist Victor DeLorenzo after the initial wave of American punk rock had begun to lose steam and was no longer popular. The duo became a real band when lead vocalist, guitarist and songwriter Gordon Gano joined them. Ritchie is credited with coming up with the name of the band after he was challenged by one of his bandmates about whether or not his brother was also in a band – he and DeLorenzo decided that they like the name and so they adopted it as their name prior to Gano joining the band. In the beginning the Violent Femmes played at local coffee houses and on street corners until they were discovered by James Honeyman-Scott from the Pretenders in 1981 whilst they were busking on a street corner close to the Oriental Theatre, which was the Milwaukee venue that the Pretenders were playing that night. Chrissie Hynde invited the band to play a short acoustic set after the opening act of the show.

The band released their debut album Violent Femmes in 1983, the album performed well and earned them a number of fans. The bands second album ‘Hallowed Ground’ moved away from the folk-alternative rock sound that the band was known for and into a country music sound, the lyrics of their songs introduced Christian themes and ideas. The bands third album ‘The Blind Leading the Naked’ saw the band change studio and producers, Mark Van Hecke had produced their previous two efforts but Jerry Harrison from Talking Heads (a famous 1980’s band like Aerosmith), who also hailed from Milwaukee was responsible for producing the bands third album. The third album once again saw the band shift their sound away from their alternative-rock roots and Christian country music sound towards a more mainstream pop-oriented sound. The album had one minor hit, ‘Children of the Revolution’ which was originally created by T.Rex. In 1985 the bands previous producer Van Hecke officially ended his partnership with the band and began composing and producing for the fast growing video game industry – although he did later return to help the band produce two more albums.

After the release of their third album the Violent Femmes briefly went on hiatus, disbanding so that Gano could release an album in 1987 in connection with his side project, a gospel band called Mercy Seat and so that Richie could release a number of solo LPs. In late 1988 the group got back together to start work on their next album, ‘3’ which was released in 1989 and returned to the bands original, stripped-back sound. In 1990 the band was signed to Reprise and the following year they released ‘Why Do Birds Sing?’ which included the minor hit ‘American Music’ which became a signature song for the band and a regular play at concerts.

In 1993 DeLorenzo chose to leave the band so that he could pursue his solo career. Guy Hoffman, who was formerly a member of both the Oil Tasters and the BoDeans joined the band as a tour member to promote a records that would later become one of the bands biggest-sellers, their ‘Add It Up (1981-1993) collection. Over the course of nine years the band, alongside Hoffman was able to record five full-length CDs and a number of film soundtrack like the song ‘I Swear It (I Can Change)’ from the South Park: Bigger, Longer & Uncut soundtrack and the sonf ‘Colour Me Once’ from ‘The Crow’. The band’s first studio album with Hoffman as band member was ‘New Times’ which was released in 1994 and included a minor hit ‘Breakin’ Up’. Their album ‘Rock!!!!’ was released in 1995 in Australia.

The band released a live album called ‘Viva Wisconsin’ in the United States in 1999 with the help of an independent label called Beyond. The album was followed up by ‘Freak Magnet’ which was released in 2000. The following year they released ‘Something’s Wrong’ which included a number of previously unreleased studio tracks, covers, demos and live performances, the album was released on eMusic and MP3 only platform. In 2002 the band’s debut 1983 self-titled album was repackaged by Rhino Records to include additional demos and tracks – this was planned to coincide with the bands 20th anniversary. To celebrate the milestone DeLorenzo requested to be included in the farewell tour and the bands original line-up was restored. In the same year the band recorded a cover of the SpongeBob theme song and a recorded a short advert for Nickelodeon.

After completing the touring and promotion of their album ‘Freak Magnet’ the bands main songwriter, Gano, decided that the band would cease producing new music and instead they would continue to give live performances. In 2005 and for a single show in 2006, all of the members of the band played together.

In 2007 there was an inter-band dispute after Gano sold the advertising rights for the bands classic song ‘Blister in the Sun’ to the fast-food retailer Wendy’s. Gano was the sole songwriter of the song although he was not credited for it and had the right to sell it, but Ritchie was not happy with its use.

Ritchie made a public statement that it was out of the band’s hands and that fans complaining about the poor taste of using the song were right to complain. He went on to state that unfortunately ‘that’s showbiz’ and that the dubious use of the song could be blamed on the insensitivity and poor taste of Gano. He went on to say that it was ‘karma’ that the songwriter had lost his songwriting abilities years ago, reportedly due to his own lack of self-respect, he also stated that it was due to his ‘willingness to prostitute our songs’ for profit. He went on to say that Gordon was vegetarian and that Ritchie himself like gourmet food and that neither of them would eat the brand’s burger, he also states that he himself did not endorse the brand on culinary, political, health, economic and environmental grounds. He also raised grievances at having his life’s work repeatedly trivialised without his consent. As a result Richie filed a lawsuit in 2007 against Gano to seek ownership over the band’s music and despite speculation that the band would break up they released a cover of ‘Crazy’ by Gnarls Barkley. The band did eventually break up in 2009 because of the lawsuit.

In 2013 the band reunited to perform at the Coachella festival in 2013. The also played a number of shows in Australia, including the Falls Festival and Woodford Folk Festival. They toured with the Barenaked Ladies for two months in Australia and in 2016 announced their first album in 16 years, ‘We Can Do Anything’.