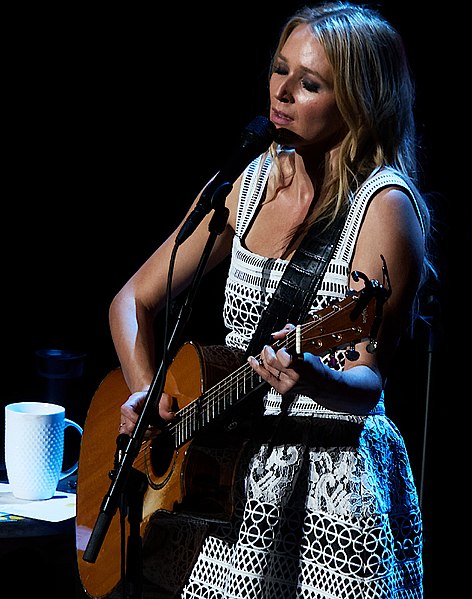 Famously known only by her stage name ‘Jewel’ you might be surprised to learn it’s actually her legal name too! Her full name is Jewel Kilcher.

What is Jewel’s age?

Jewel is the second child of father Attila Kuno Kilcher and mother Lenedra Kilcher. When she was born her family was living in Utah with her eldest sibling, Shane. Her father, a Mormon was attending the Brigham Young University in Ohio. Her family later stopped attending the Church of Jesus Christ of Latter-Day Saints after her parents divorced. After her birth her family moved to Anchorage, Alaska and settled on a large homestead. Her brother Atz Jr. was born shortly after. Her parents divorced in 1981 and Jewel went to live with her father in Homer, Alaska. Jewel also had a half-brother on her father’s side called Nikos. The family lived far from town without running water or heat, their lifestyle was featured on ‘Alaska: The Last Frontier’. Her cousin is actress Q’orianka Kilcher and her paternal grandfather was Yule Kilcher, a state senator.

In her youth the singer earned money with her father by performing songs in roadhouses and taverns, she also learned to yodel around this time.

The singer was referred to Interlochen Arts Academy in Interlochen, Michigan at the age of 15. She applied to the school and got a partial scholarship to study operatic voice. Local businesses in her home town helped raise funds to pay the remainder of her school tuition and she relocated to attend the school, where she received classical training and learnt to play the guitar. She began writing her own music at the age of sixteen. During her time at the school she would often perform live at cafes and coffeehouses.

Where does Jewel live?

Jewel lives on a 2,200 square metre ranch in Texas with her husband. She also recently sold her LA home for $1.4 million. The renovated 1938 Spanish style home featured city views and had three bedrooms and a home office.

The singer is petite, standing at around 167 cm’s tall and weighing around 58 kg’s. She maintains her figure by eating a balanced diet of grass-fed meats and organic vegetables.

What nationality is Jewel?

The singer was born and raised in the United States, although her paternal grandparents were of Swiss-German ancestry.

The singer was raised in a Mormon household but stopped attending the Church when she was young. She has not spoken much about her religious beliefs as an adult, but has spoken about the fact that she practices mindfulness and meditation to help her cope with anxiety.

Jewel is famous for being an American singer, songwriter, musician, actress, author and poet. She shot to fame in the 90s with her debut album ‘Pieces of You’ which is one of the best-selling debut albums in history, with more than 12 million units sold. In total the singer has sold more than 30 million albums worldwide. She has earned a number of awards and nominations, including four Grammy Award nominations. In addition to her singing career she has also released a poetry collection and appeared in the film ‘Ride with the Devil’ which was critically acclaimed.

How did Jewel career start?

The singer began her by travelling the country giving street performances for money. She often played at The Inner Change Café and Java Joes where her friend Steve Poltz and his band The Rugburns also often performed – she would later collaborate with them on some of her songs. In 1993 the singer was discovered by Inga Vainshtein, manager of the band Rust. The lead singer of the band, John Hogan rang Vainshtein to tell him about the impressive female singer who performed at the local coffee shop on Thursdays. Vainshtein and a representative from Atlantic Records went to the coffee shop to see her perform and rang the head of Atlantic Records after the show to ask him to pay for her demo, since she was homeless and living in a van at the time. Vainshtein became her manager and later helped to instigate a label bidding war over her.

Jewel released her debut album, ‘Pieces of You’ at the age of 21. The album was recorded at Neil Young’s ranch and included his backing band, The Stray Gators. The album was an instant success and spawned a number of top ten hits. It remained on the charts for two years and peaked at number four. In 1996 the singer gave a two-day free concert at the Bearsville Theatre to promote her music

. In 1998 the singer was selected to sing the American national anthem during the opening of the Super Bowl in San Diego. The performance drew criticism for her lip-synching during the performance, which was noticed by fans because she missed her cues at the beginning of the song. In the same year she published her own book of Poetry, titled ‘A Night Without Amor’, it sold more than a million copies and made it to the New York Times Best-Seller list, but received mixed reviews.

The singer released her second studio album in November 1998. The album debuted at number three and sold more than 368,000 copies in its first week. It went on to sell more than 3.8 million copies in the US. The singer made her first acting debut shortly after the release of the album, appearing in the Ang Lee’s ‘Ride with the Devil’.

In 2003 she released her fifth album ‘0304’ which featured the lead single ‘Intuition’ which went to number five on the charts. The album sold 340,000 copies in the first two months of its release and was a departure from her previous sound, with more upbeat, pop-oriented songs.

In 2006 the singer released her sixth album, titled ‘Goodbye Alice in Wonderland’, it received mixed reviews but still sold 82,000 copies in its first week.

In 2007 the singer revealed that her contract with Atlantic Records had not been renewed due to poor sales on her latest album. She hinted that she would like to do a country album next. In November 2007 she signed with Valory Records and released her first country album, titled ‘Perfectly Clear’. The album sold 48,000 units its first week and debuted at number one of the Country charts. The singer made her second film appearance around the same time in the film ‘Walk Hard’.

In 2009 the singer released the album ‘Lullaby’ which was a collection of lullabies. The lead single, ‘Somewhere over the rainbow’ was the number one on iTunes for children’s songs of the week.

In 2010 the singer released her ninth album, ‘Sweet and Wild’ which peaked at number 34 on the country charts. She released her second children’s album, ‘The Merry Goes ‘Round’ in 2011. In 2012 she appeared on the Lifetime film ‘Ring of Fire’ as June Carter Cash.

In 2013 the singer released her second Christmas album, titled ‘Let It Snow: A Holiday Collection’.  In 2014 she confirmed that she was working on producing an album which would not be released by major record labels. The album ‘Picking up the Pieces’ was released in 2015. Four days later she released a memoir titled, ‘Never Broken, Songs Are Only Half My Story’. In 2016 she appeared in the Comedy Central Roast of Rob Lowe.

She returned to acting in 2017 with an appearance in the Hallmark film, ‘Framed For Murder: A Fixer Upper Film’ and ‘Concrete Evidence: A Fixer Upper Mystery’ where she appeared as the character Shannon Hughes.

Towards the end of 2019 she released the song ‘No More Tears’ which was written for the documentary ‘Lost In America’. The song is the first track released from her upcoming 2020 album.

The singer has an estimated net worth of $30 million thanks to her career as a singer and actress.

Who has Jewel married?

Jewel was previously married to pro rodeo cowboy Ty Murray whom she was together with for 10 years. They married in the Bahamas and announced their divorce in 2014 after nearly 6 years of marriage.

Jewel has also been linked to Sean Penn, whom she dated in 1995.

Does Jewel have kids?

The singer shares a son, Kase Townes Murray with her ex-husband, their son was born on the 11th of July 2011.