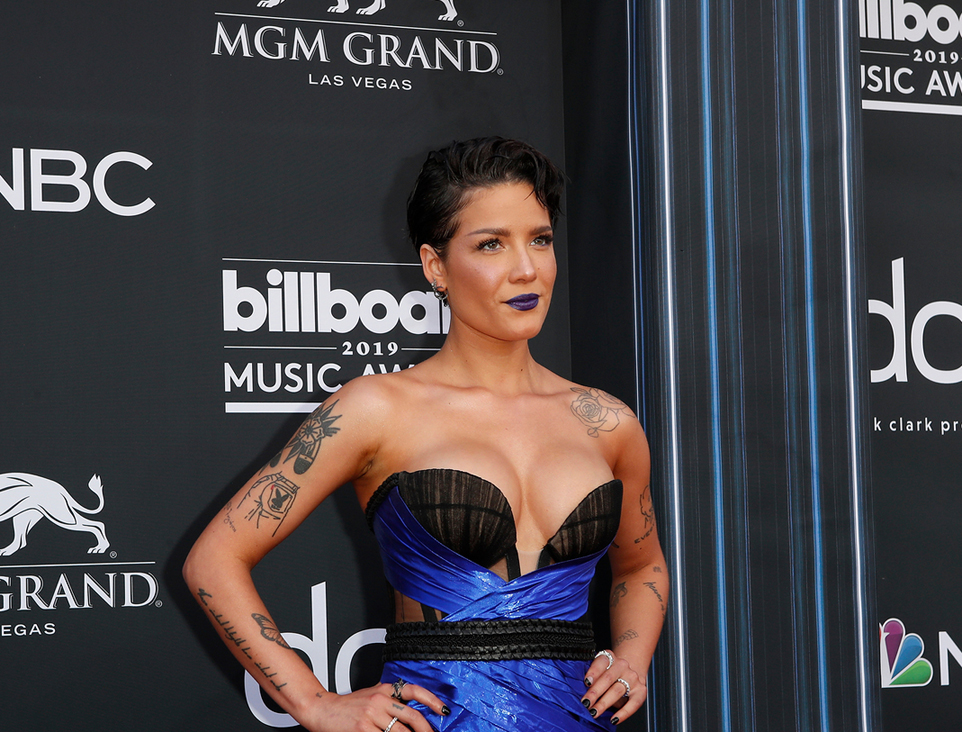 Known by her stage name, Halsey, her full name is actually Ashley Nicolette Frangipane. Her stage name is both an anagram of her first name and the name of a street that she lived on in Brooklyn.

What is Halsey’s age?

Halsey was born on the 29th of September 1994, and is currently 25 years of age. She was born in Edison, New Jersey and grew up moving around a lot.

Ashley Frangipane is the daughter of Nicole, a security worker at a hospital and Chris, the manager of a car dealership. Her parents both dropped out of college when they fell pregnant with her. The singer has two younger brothers, Sevian and Dante. She learned to play the violin, viola and cello when she was young and later learned the acoustic guitar. Her family moved frequently when she was young and she had been enrolled in six schools by the time she was a teenager. In high school she was bullied by other kids and attempted suicide at 17, which resulted in a 17-day hospitalisation. She was subsequently diagnosed at bipolar and she later began using recreational drugs. She left her family to live with an older man who was 24.

Where did Halsey go to school?

The singer attended Warren Hills Regional High School in Washington New Jersey, she graduated in 2012. Following graduations she enrolled at the Rhode Island School of Design but she dropped out of college and was kicked out of home. She began living in a basement in lower Manhattan and occasionally lived in a homeless shelter or stayed with her maternal grandmother.

Where does Halsey live?

Halsey owns a Hollywood Hills home, which is currently up for sale. The home was purchased for $2.2 million in 2017 and is set across 2,500 square feet. The house features three bedrooms, three bathrooms, a living room, kitchen and a den. The home also boasts an infinity pool and rain showers. 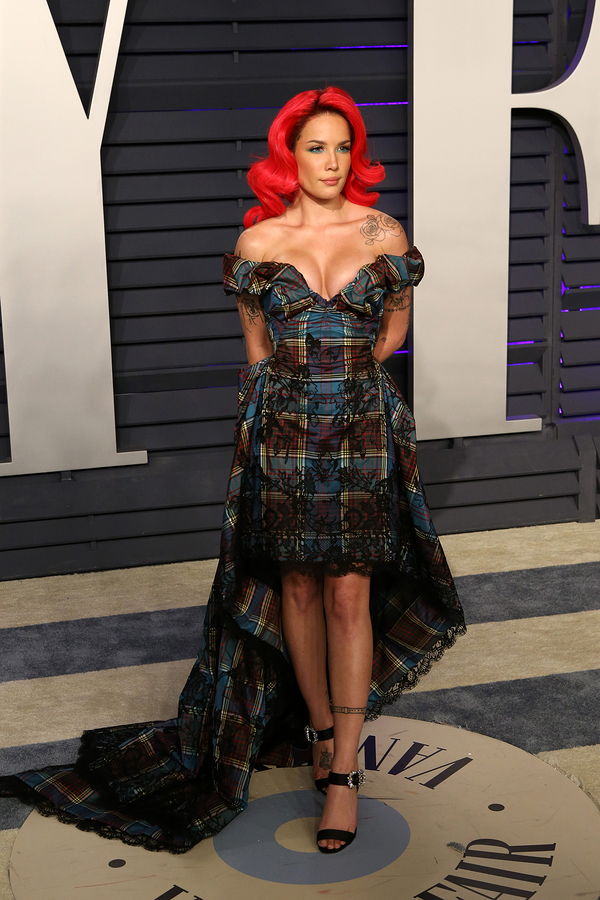 What is Halsey’s height and weight?

Halsey is approximately 163 cm’s tall and weighs around 54 kg’s. Halsey works out to keep her toned abs and body and admitted she did a lot of sit-up’s before appearing during the Victoria Secret show.

What nationality is Halsey?

Halsey was born in the United States and is an American citizen. The singer’s mother was of Italian, Hungarian and Irish descent. Her father is African-American and has some Irish ancestry.

The singer has openly stated that she doesn’t believe in God and has said that she believes in synchronicity which is meaningful coincidences.

Halsey is famous for being an American singer and songwriter. She first gained attention after self-releasing music on social media and was signed to the label Astralwerks in 2014. The singer has had one number on album and two number-two albums since her career began. She’s released two number one singles and her music has been streamed more than six billion times. She has won a number of awards and nominations including four Billboard Music Awards, one American Music Award, one GLAAD Media Award, three Guinness World Records, an MTV Video Music Award and several Grammy Award nominations.

The singer’s career first started when she began writing music at the age of 17 and posting the videos on YouTube, Kik and Tumblr. She became well known for being a fan of Harry Styles from One Direction and for parodying the Taylor Swift song ‘I Knew You Were Trouble’. In 2014 the singer went to a party where she met a musician that she collaborated with on the song ‘Ghost’ which she posted on SoundCloud. The song quickly became popular and she was contacted by a number of record labels. She chose to sign with Astralwerks because she felt they would give her more creative freedom than other labels. The singer played a number of acoustic shows in US cities under a number of stage names after that.

The singer began to tour with The Kooks in 2014, and performed a number of songs. She released her debut EP ‘Room 92’ in 2014. She then began work on her debut album and performed songs from the upcoming album at South by Southwest. She co-headlined with Young Rising Sons and was the opening act for Imagine Dragons in 2015. Her debut studio album ‘Badlands’ was released in August 2015. The album was a concept album about a post-apocalyptic future called ‘The Badlands’. All of the songs on the album were written by Halsey, when she was nineteen. Halsey said that she felt the album did not have a proper radio hit, but it still debuted at number two on the Billboard 200 charts and sold 115,000 copies in its first week. The singer promoted the album with her Badlands tour and as the opening act for The Weeknd’s tour in 2015.

The singer was featured on the Justin Bieber song ‘The Feeling’ for his fourth studio album ‘Purpose’. In 2016 the singer released a lipstick named after herself for MAC cosmetics Future Forward line. In 2016 the singer was featured on The Chainsmokers’ single ‘Closer’ which she co-wrote. The song was released on YouTube in 2016 and earned her a Grammy Award nomination for Best Pop Duo/Group Performance.

The singer started working on her second album ahead of the release of her first. In 2017 she released the track ‘No Afraid Anymore’ which appeared on the soundtrack of the film ‘Fifty Shades Darker’. The song ‘Now or Never’ was released in April 2017 as the lead single for her second studio album. The song peaked at number 17 on the Billboard Hot 100 charts and was certified 2x platinum.

The song ‘Bad at Love’ was released in August and peaked at number five. The song was certified 4x Platinum and sold more than 300,000 units outside of the US. In 2018 she was featured on Saturday Night Live where she performed the song ‘Bad at Love’ and ‘Him & I’. The singer collaborated with Khalid on Benny Blanco’s debut single ‘Eastside’ which peaked at number nine on the Billboard Hot 100 charts. She appeared in two films, as the voice of Wonder Woman in ‘Teen Titans Go! To the Movies’ and in ‘A Star Is Born’.

The singer released a single, titled ‘Without Me’ in 2018. The single became her most successful to date, becoming her first number one on the Hot 100 charts. The song remained in the top five for 22 weeks and reached the top three in a number of countries outside of the US.

The singer was featured in a number of collaborations in the first few months of 2019, including a remix of ‘Without Me’ with Juice WRLD, ’11 Minutes’ with Yungblud. In January 2020 the singer released her third album ‘Manic’ which included the single Nightmare which debuted in the top fifteen in the US. She later released the single ‘Graveyard’. The singer embarked on her Manic World Tour to promote the album. In January she appeared on Saturday Night Live where she performed two new songs from her album, ‘You Should Be Sad’ and ‘Finally//Beautiful Stranger’.

In 2019 she collaborated with Bring Me on the Horizon on their EP ‘Music to Listen To…’ and later recorded the song ‘Experiment on Me’ which appeared on the soundtrack for the film ‘Birds of Prey’.

What is Halsey’s net worth?

Halsey has an estimated net worth of approximately $12 million thanks to her album releases, sales and tours.

Who has Halsey been in a relationship with?

The singer is openly bisexual and has dated Norwegian producer Lido, rapper G-Eazy whom she met at a party and broke up with in 2018, she also dated Yungblud and is currently dating Evan Peters in October 2019.