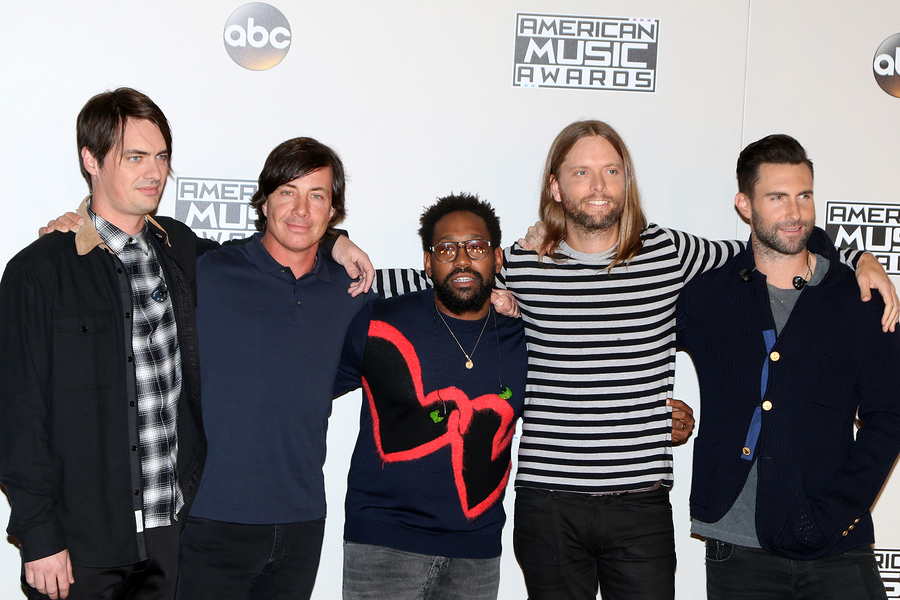 Maroon 5 began after three of the high school age band members began playing music together at the age of 12 after they met at Brentwood School in Los Angeles. The band originally went by the name of ‘Kara’s Flowers’ after a girl that all of the band members had a crush on. While playing at a party in Malibu they were overheard by producer Tommy Allen who offered the become their manager and help them record a n album with the help of his partner, songwriter Jonhn DeNicola who is well known for writing ‘(I’ve Had) The Time of My Life’ from the film Dirty Dancing. The band was subsequently offered a deal by Reprise Records. The band released their first record ‘The Fourth World’ but it failed to sell well and the band were dropped by their label. The band members took time apart whilst Dusick and Madden attended the University of California and Levine and Carmichael relocated to attend Five Towns College in New York.

The band reformed in 2000 and was signed for a demo deal with MCA Records. Their record was rejected by several labels but caught the attention of Octone Records who liked the song ‘Sunday Morning’. By the time of reforming they had begun to take notice of the urban music around them and this influenced their music. The label insisted that the band add a fifth member and change their name. The label recruited James Valentine to join them as the guitarist, to free Levin up to perform as the bands front man.

James Valentine had attended university with John Mayer and the two reconnected during a radio broadcast by Mayer. Mayer heard the album and was impressed, especially by ‘This Love’ and invited them to open during his 2003 tour. The band’s first single ‘’Harder to Breathe’ picked up some airplay which helped to increase sales of the album. Their second album ‘Songs About Jane’ reached the top 20 on the US charts in March 2004 and later peaked at number six on the charts in September 2004. The album achieved 10 million sales worldwide. The band were invited to open for Mayer again in 2004 and continued touring almost non-stop throughout the next few years, visiting more than 17 counties whilst they toured with Michelle Branch, Graham Colton, the Rolling Stones, Matchbox Twenty, the Hives, the Thrills, Thirsty Merc, the Donnas and Guster.

After eight months in the recording studio Maroon 5 released their second album ‘It Won’t Be Soon Before Long’ in 2007. The single ‘Makes Me Wonder’ was released ahead of the album and it was the top selling song and video on iTunes. After its release the albums was the top selling album on iTunes with more than 50,000 pre-sales.

In support of the album the band embarked on a six date club tour and later began their ‘It Won’t Be Soon Before Long’ tour in 2007, the band travelled through 28 cities in New York and ended the tour is Las Vegas.

The band’s third album was called ‘Hands All Over’, released in 2010 the album debuted at number two on the charts in the US. Sales were relatively weak in comparison to their previous album and it received mixed reviews from critics and fans. The band began touring in late 2010 alongside special guests such as OneRepublic, Bruno Mars, Sara Bareilles and Jason Segel.

In 2011 the band re-released their album to include their summer hit single ‘Moves Like Jagger’ which featured Christina Aguilera. In 2012 the band announced that Jesse Carmichael would be taking a break from the band and would be replaced by vocalist PJ Morton. In 2012 the band announced that they would be releasing their fourth studio album ‘Overexposed’. The album had an even heavier pop influence than previous album. Ahead of the album’s release the band premiered the song ‘Payphone’ which peaked at number two on the charts. The bands next single ‘One More Night’ reached number one on the charts and beat out Psy’s ‘Gangnam Style’ for the top spot.

The band introduced a new addition to the band at the beginning of their ‘Overexposed Tour’, during the tour the band began working on their fifth album. In 2012 the band debuted the third single of their album, ‘Daylight’ and debuted a video project called ‘The Daylight Project’. The song reached number one on the mainstream charts.

In 2014 the band signed with Interscope Records and announced that they would be releasing their fifth album titled ‘V’. The album’s first single was titled ‘Maps’ and was released on June 2014 and peaked at number six on the US Hot 100 charts. The album reached number one on the US charts in 2014. The albums third single ‘Sugar’ was released in 2015 and featured a video of the band travelling around and performing in front of couples at random weddings. The single reached number two on the Billboard Hot 100.

The band embarked on a worldwide tour called ‘Maroon V Tour’, working with a number of artists including Magic!, Tove Lo, Phases and Rozzi Crane. The band released a greatest hits album in 2015 called ‘Singles’. In 2017 the band revealed that they had begun work on their new album and stated that it was influenced by R&B music. The band began a ‘Red Pill Blues’ tour to support the album in 2018 and concluded the tour in 2019. More recently the band has released the single ‘Memories’ which peaked at number two on the Hot 100 charts in the United States. The single will serve as the lead single on their upcoming album. The band has confirmed that they are in the studio working on their new album. The band headlined at the pre-show for the Super Bowl and received positive responses from the audience (a change from their performance the previous year). Recently the band has begun a 2020 tour, which started in February 2020 and is scheduled to end in September 2020. Meghan Trainor and Leon Bridges are serving as opening acts for the band.