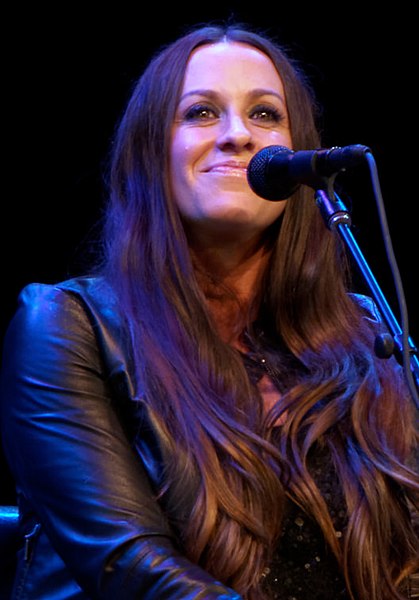 Alanis Morissette is famous for being a Canadian-American singer, songwriter, record producer and actress. She is well known for her unique mezzo-soprano voice and first became successful in the 1990s, she is most well-known for her album ‘Jagged Little Pill’ which was rock influenced and sold more than 33 million copies around the world – the album is her most critically acclaimed and popular. The singer has had a great deal of creative control over her music in subsequent albums and has sold more than 75 million albums combined worldwide. She has often been called the queen of alternative rock.

Alanis Morissette first began her career after she recorded a demo of the song ‘Fate Stay With Me’ in Toronto. She recorded second demo in 1989 and sent the song to Geffen Records, but the tape was stolen and never listened to after a burglary at the studios headquarters in 1989.

In 1991 the singer released her debut record under the label MCA Records Canada, her album ‘Alanis’ was available only in Canada. The singer co-wrote every track on the album with producer Leslie Howe. The album achieved platinum certification and it’s single ‘Too Hot’ reached the top twenty on the Canadian charts. Other singles, ‘Walk Away’ and ‘Feel Your Love’ also reached the top 490. The singer was often compared to Debbie Gibson and Tiffany because of her looks and sound. The singer opened for Vanilla Ice at a number of concerts and received nominations for the Most Promising Female Vocalist of the Year, Single of the Year and Best Dance Recording at the 1992 Juno awards.

The singer also released a second album, ‘Now is the Time’ which was less dance-oriented and included more introspective lyrics. The album produced three hits in Canada but was considered commercially unsuccessful because it sold only half of the units that her previous album did, she was subsequently dropped from her label.

In 1993 the singer was introduced to Scott Welch from HitQuarters, who was impressed by her voice. The pair decided that it would be best for career if she moved to Toronto after completing high school. Part of her development as a musician was funded by her producer and songwriter Glen Ballard was positive enough about her potential that he allowed her to use his studio to produce new music. She worked with him on two of her songs for ‘Jagged Little Pill’ which was her first album to be internationally released. By 1995 the singer has signed a deal with label Maverick Records, she also learned how to play the guitar in the same year.

‘Jagged Little Pill’ was released in 1995. Whilst it was initially only expected to sell moderately, it was picked up by KROQ-FM in Los Angeles, who played ‘You Oughta Know’ and the song quickly gained attention and popularity. The music video for the song entered heavy rotation on MTV. Following the success of the album’s first single, subsequent singles ‘All I Really Want’, ‘Hand In My Pocket’, ‘You Learn’ and ‘Head Over Feet’ all became hits. ‘Ironic’ was the album’s biggest hit, reach number one on the charts. The album sold more than 16 million copies and approximately 33 million worldwide, which made it the second biggest selling album by a female artist at the time.

Alanis Morissette became extremely popular in Canada and the album was certified twelve times platinum in the country, it was also a best-selling album in Australia and the United Kingdom.

The album’s success is often credited as being instrumental in allowing other female artists such as Shakira, Meredith Brooks, Pink, Michelle Branch, Lady Gaga

and Avril Lavigne to break into the industry. The singer did however receive criticism for her collaborations with Ballard as he was known as an image-maker. Following the release of her album the singer won a number of awards including six awards at 1996’s Juno Awards ceremony; awards included album of the year, single of the year, female vocalist of the year, songwriter of the year and best rock album.

At the Grammy Awards the singer won best female rock vocal performance, best rock song, best rock album and album of the year. She also won a number of awards the following year, including songwriter of the year and international achievement award and in 1998 she won Best Music Video, Long Form.

To promote the album the singer began an 18-month long tour and at one-point opened for the Foo Fighters during a performance. She released her fourth album ‘Supposed Formed Infatuation Junkie’ in 1998. Her label hoped to sell up to one million copies in total upon its release but instead the album debuted at number one and sold more than 469.000 copies in its first week, which was a record at the time. Despite record sales the album alienated a number of the singers fans with its lyrics and is often considered to be an example of the sophomore jinx. Despite mixed responses the album one the Juno Award for best album and received platinum certification.

In 1999 the singer released a live acoustic album titled ‘Alanis Unplugged’ which was recorded during her MTV Unplugged appearance. The singer performed her single ‘So Pure’ live during the 1999 Woodstock festival and received a nomination for the best female rock vocal performance during the 2001 Grammy awards.

The singer released her fifth album, ‘Under Rug Swept’ in 2002, the album was solely produced and written by her and it debuted at number one on the US charts. It sold a million copies in the US and went platinum in Canada after it received a lot of airplay.

In 204 the singer hosted the Juno Awards dressed in a bathrobe which she removed, revealing a flesh coloured bodysuit. The stunt was in response to the censorship culture of the US and the controversy surrounding Janet Jackson’s wardrobe malfunction during the Super Bowl halftime show.

The singer released her sixth album ‘So-Called Chaos’ in May 2004, the album debuted at number five and received mixed reviews. The album went on to become the singers lowest selling in the US.

In 2007 the singer released a cover of The Black Eye Pea’s theme song ‘My Humps’. The singer released her seventh album ‘Flavors of Entanglement’ in mid-2008. In 2011 the singer appeared at the American Music Awards and said that she was working on a new album which would likely be released in 2012. She began a tour in 2012 throughout Europe, prior to announcing that her eight studio album ‘Havoc and Bright Lights’ would be released in August 2008.

To commemorate the 20th anniversary of ‘Jagged Little Pill’ the singer released a four disc-collector’s edition of the albums.

In 2018 whilst on tour this singer recorded a new song titled ‘Ablaze’ and hinted that she was working on a new album after an almost six year hiatus. She announced in June 2019 that the album would be called ‘Such Pretty Forks in the Road’ and that it was set for release in May 2020.