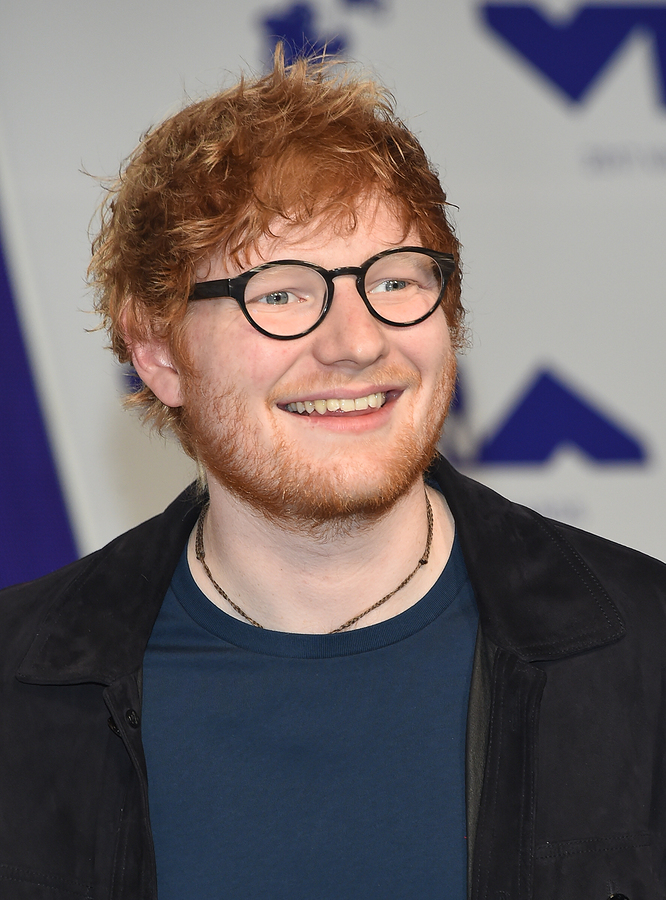 Ed Sheeran (birth name Edward Christopher Sheeran) is an English singer, songwriter, record producer and actor. The singer has achieved a great deal of commercial success in his career (his second album was the second-best-selling album of the year in 2015) and he has sold more than 150 million records around the world, making him one of the best-selling artists in history. Two of his album shave made the charts as some of the best-selling albums in the UK. In 2019 he was named the artist of the decade by the Official Charts Company. He was named by Spotify as the second most streamed artist of the decade. He has won many awards and accolades during his career including album of the year at the Brit awards, a Gramy Award for Song of the Year and Best Pop Solo Performance.

Ed Sheeran first began recording music in 2004 when he independently released his first song collection, ‘Spinning Man’. He was friends with English singer Passenger from the age of 15 and the two would play gigs around Cambridge. In 2008 he moved to London and began play small venues in the area, he also auditioned for the TV series Britannia High. In 2009 he released his own EP called ‘You Need Me’ and went on tour with Just Jack. He also did several collaboration with singer Leddra Chapman and worked on CeeLo Green’s ‘Fuck You’. In 2010 he released the EP ‘Loose Change’ which was critically acclaimed and featured his debut single ‘The A Team’. The song began to gain ground and was seen by people of the internet on YouTube. The song received praise from bost The Independent and Elton John. Ed Sheeran released two other EP’s in 2010, ‘Ed Sheeran: Live at the Bedford’ and ‘Songs I Wrote with Amy’ which included a number of love songs that he had written to Amy Wadge.

In 2011 he released the EP ‘No. 5 Collaborations Project’ which featured artists such as Wiley, Jme, Devlin, Sway and Ghetts, the EP gained the singer mainstream popularity and it reached number two on the iTunes charts. The EP sold more than 7,000 copies on iTunes without any promotion or marketing and when the singer played a free show in Camden town more than 1,000 fans turned up and the singer played at four venues, including outside on the street to ensure everyone saw him perform. The singer was signed to Asylum Records the following month.

In 2011 the singer released his single ‘The A Team’ for digital debut in the UK, the single entered the UK charts and went to number three, selling more than 58,000 copies. The single also reached the top ten in Australia, Germany, Ireland, Japan, Luxembourg, New Zealand, Norway and Netherlands. The singers album ‘+’ (pronounced plus) was released in September 2011, the album debuted at number one and it had sold more than 791,000 copies by the end of the month. The album reached six times platinum certification. The album reached the top five in Australia, Canada, Ireland, New Zealand and the US.

During the 2012 Brit Awards the singer won the award for Best British Male Solo Artist and British Breakthrough Act of the year. Just prior to the awards Ed Sheeran announced that he would be touring as the supporting act for Snow Patrol between March and May 2012. In May 2012 the singer performed his song ‘The A Team’ during the Diamon Jubilee of Queen Elizabeth II. He also performed at the closing ceremony of the the 2012 Summer Olympics.

Taylor Swift reached out to the singer after his music during the Australian leg of her 2012 tour and they later collaborated on the song ‘Everything has Changed’. The singer was also invited to contribute vocals to One Direction’s second studio album on their single ‘Little Things’ which went to number one in the UK. Towards the end of 2012 and beginning of 2013, Ed Sheeran headlined at a number of US venues and received a Grammy nomination for his song ‘The A Team’.

Elton John, the manager of Sheeran’s management company asked awards organisers to get the singer a performance slot, however was told that he was not yet high profile enough. To get around the issue Elton John decided to perform with the singer.

In 2013 the singer went on tour with Taylor Swift, for her album ‘Red’ and played in arenas and stadiums across North America as her opening act. In late 2013 the singer headlined three sold-out shows in Madison Square Garden, New York. During the concert the song debuted two new songs, which included ‘Tenerife Sea’ and ‘I See Fire’ which had been written for the end credits of ‘The Hobbit: The Desolation of Smaug’. The singer received a nomination for Best New Artist at the 2014 Grammy Awards.

In March 2014 the singer performed at a charity concert for teenage cancer at the Royal Albert Hall in London, and debuted his song ‘Take It Back’. In April 2014 the singer released his single ‘Sing’ which was the lead single for his upcoming album. The song was a notable departure from his previous sound and despite concerns that it would alienate his fan base, the song became his first number one single in the UK.

The singers second album ‘x’ (pronounced ‘multiply’) was released in June 2014 around the globe. The singer had written more than 120 songs for the album over the cours e of three years. The album contained songs which had been produced by the likes of Rick Rubin, Pharrell Williams and Benny Blanco. The album reached number one in both the UK and the US. To promote the album the singer went on a worldwide tour which began in August 2014 in Osaka, Japan.

The singer headline during the 2014 AFL Grand Final in Australia and released the single ‘Don’t’ and ‘Thinking Out Loud’ whilst on tour. ‘Thinking Out Loud’ became his second number one single in the UK and peaked at number two in the US. In 2014 the singer was also named the most streamed artist on Spotify after his combined streams reached 860 million. He also became the best-selling artist on iTunes in the same year in the UK, Ireland and New Zealand.

The album was nominated for a Grammy Award for the Album of the Year at the 2015 Grammy Awards and Sheeran also gave a performance with John Mayer during the ceremony.

During the 2015 Brit Awards the singer won the awards for British Male Sale Artist and British Album of the Year, he also received the Ivor Novello Award for Songwriter of the Year in the same year. The singer performed alongside The Rolling Stones during their Zip Code Tour and also performed at to a sold-out Wembley Stadium in London.

The singer also wrote Justin Bieber’s hit song ‘Love Yourself’ in 2015, the song was originally intended to be included on Bieber’s third album but Sheeran planned to scrap it until Bieber took the song.

His single ‘Thinking Out Loud’ won him two Grammy Awards during the 2016 Grammy Awards; Song of the Year and Best Pop Solo Performance. His album ‘x’ finished out the year as the second best-selling album of the year, just behind ‘25’ by Adele.

The singer took a year long hiatus before announcing his new album ‘÷’ (pronounced divide) which was released in March 2017. The album debuted at number one in the UK, the US, Germany, Australia and Canada, as well as a number of other countries. It sold 672,000 in its first week of sales and became the fastest selling album by a male solo artist in the UK, and the third fastest in UK chart history.

The singer won the award for Artist of the Year at the 2017 Grammy Awards and became the mst streamed Spotify artist for 2017, with 6.3 billion streams.

More recently the singer has released his single ‘I Don’t Care’, a collaboration with Justin Bieber which debuted at number two in the US. He was also named the second most streamed artist of the decade by Spotify.