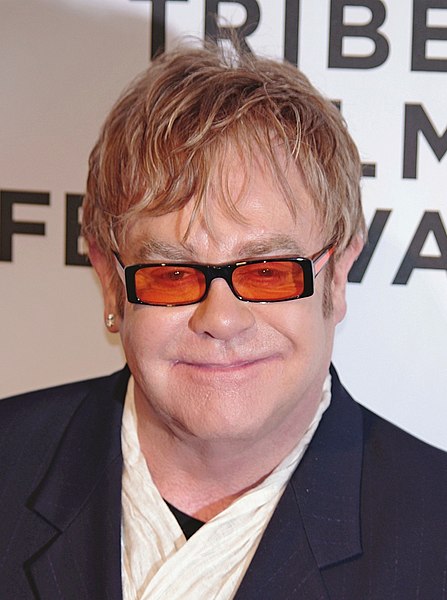 Elton John (full name Sir Elton Hercules John, born Reginald Kenneth Dwight) is famous for being an English singer, songwriter, pianist and composer. Elton John has sold over 300 million records, which has made him one of the best-selling artists in history. The singer has partnered with and worked with songwriter Bernie Taupin since 1967, collaborating with him on more than 30 albums. During his career he has produced more than fifty top 40 songs in the UK and the US, including seven UK numbers ones and 9 US number one songs. His tribute to Diana, Princess of Wales is arguably the song he is most remembered for. The song ‘Candle in the Wind 1997’ sold more than 33 million units in its first week.

The singer has been highly awarded over the course of his career, receiving five Grammy Awards, five Brit Awards, two Academy Awards, two Golden Globe awards, a Tony award and a Disney Legends Award for his achievements. The singer received his induction into the Rock and Roll Hall of Fame in 1994; he was also inducted into the Songwriter Hall of Fame in 1992. In 1998 he was knighted by Queen Elizabeth II for his services to music and charity and has since performed at a number of royal events, including a Party at the Palace in 2002, the Queen’s Diamond Jubilee concert in 2012, and earlier the funeral of Princess Diana in Westminster Abbey in 1997.

The singer has been involved in raising awareness around AIDS since the 1980s. in 1992 he opened the Elton John AIDS Foundation and began hosting an annual academy awards party. Since its beginning the foundation has raised more than 300 million pounds. Elton John first announced that he was bisexual in 1976 before coming out as openly gay in 1988. He has been in a civil-partnership with his partner David Furnish since 2005, the coupe officially married after same sex marriage was legalised in 2014.

The musician began his career at the age of 15 after hs mother and step-father helped him to get hired as a pianist at the Northwood Hills Hotel. He was known as ‘Reggie’ and he played classics and his own original songs. He began to wear horned rimmed glasses around this time to look more like Buddy Holly.

In 1962 the singer formed a band known as Bluesology with some of his friends, he also played solo shows at a London hotel and ran errands for a music publisher. By the mid-1960s Bluesology had picked up regular work as a backing band for musicians like the Isley Brothers, Major Lance and Patti LaBelle and the Bluebelles.

In 1967 the singer answered an ad in the magazine ‘New Musical Express’ which was placed by the manager of Liberty Records. Williams and John met up and Williams provided an envelope of song lyrics written by Bernie Taupin. Elton John wrote music to go with the envelope and their partnership began. The pair recorded the song ‘Scarecrow’ and a couple of months later Elton John began to go by his stage name as a tribute to saxophonist Elton Dean and singer Long John Baldry. His name was legally changed in 1972. John and Taupin joined DJM Records in 1968 as songwriters and produced material for a number of albums.

John and Taupin worked on a number of more complex songs together which resulted in their single ‘I’ve Been Loving You’ and ‘Lady Samantha’. They also recorded the album ‘Empty Sky’ before recording a second album ‘Elton John’ which was released in 1970. The albums second single ‘Your Song’ peaked at number seven on the UK singles chart and number eight in the US. The albm was a hit, reaching number four in the US and peaking at number five in the UK. The singer put on his first concert in the US at the Troubadour in Los Angeles, later that year he released a concept album ‘Tumbleweed Connection’ which reached number two in the UK and number five in the US.

Elton John and Taupin recorded the soundtrack to the film ‘Friends’ which reached number eight in the US and included the hit song ‘Tiny Dancer’ and ‘Levon’.The album ‘Honky Chateau’ was the singers first number one album in the US, it included the hits ‘Rocket Man’ and ‘Honky Cat’.

His pop album ‘Don’t Shoot Me I’m Only The Piano Player’ reached number one in the UK, the US and Australia. His album ‘Goodbye Yellow Brick Road’ released in 1973 was highly acclaimed and topped the charts in a number of countries, it contained the hit songs ‘Bennie and the Jets’, ‘Goodbye Yellow Brick Road’, ‘Candle in the Wind’ and ‘Saturday Night’s Alright for Fighting’. His musical style has been compared to Billy Joel.

Already very successful the singer formed his own record label ‘The Rocket Record Company’ and signed notable acts like Neil Sedaka and Kiki Dee. At the same time he signed an $8 million contract with MCA to release his own music. In 1974 the label released a Greatest Hits album which was highly successful and sold more than 16 million copies.

The singer collaborated with John Lennon on the song ‘Lucy in the Sky with Diamonds’ and later that year performed with him at Madison Square Garden in New York.

The singer released the album ‘Canbou’ in 1974, it was his third UK number one and topped the charts in the US, Canada and Australia.

In 1975 he released the album ‘Captain Fantastic and the Brown Dirt Cowboy’ which debuted at number one in the US. The following year he released a live album, ‘Here and There’ and later ‘Blue Moves’.

In 1977 he announced plans to retire from performing and dropped production down to a single album per year. In 1978 he released ‘A Single Man’ which did not produce any top 20 singles, in 1978 he released the disco album ‘Victim of Love’ which was not well received.

In 1981 the singer released the album ‘The Fox’ and later made his way back to the charts with 1983’s ‘Too Low for Zero’ which included the hits ‘I’m Still Standing’ and ‘I Guess That’s Why They Call It The Blues’. In 1985 he perfomed at Live Aid at Wembley Stadium and recorded material with Millie Jackson in the same year.

He had a number of hits during the 80s including ‘Nikita’, ‘I Don’t Wanna Go On With You Like That’ and an orchestral version of ‘Candle in the Wind’.

Elton John had his first solo UK hit single with the song ‘Sacrifice’ from his 1989 album ‘Sleeping with the Past’. In 1992 the singer released the album ‘The One’ which reached number eight in the US. In 1994 he recorded a number of songs for the soundtrack of the Disney film ‘The Lion King’ which earned him a Grammy for Best Original Song. The singer received his rock and roll hall of fame induction in 1994.

Following the death of Diana, John and Taupin revised the lyrics of their 1973 song ‘Candle in the Wind’ to honour her and he performed the song live for the first time during her funeral. The song became the fast selling single in history and was the first single ever to certified Diamond in the United States.

In 2005 the singer composed the music for the Billy Elliot stage production which was one of the longest running in West-end history. He celebrated his 60th birthday with a record breaking 60th performance at Madison Square Garden and also appeared at a Concert for Diana in the same year. In 2009 he collaborated with Alice in Chains on the song ‘Black Gives Way to Blue’.

In 2010 the singer released the album ‘The Union’ and performed at the Queen’s diamond Jubilee Concert in 2012. In 2017 he announced that he was working on the score for the Broadway adaptation of ‘A Devil Wears Prada’. In 2018 the singer announced a three year farewell tour, as he planned to retire from touring.