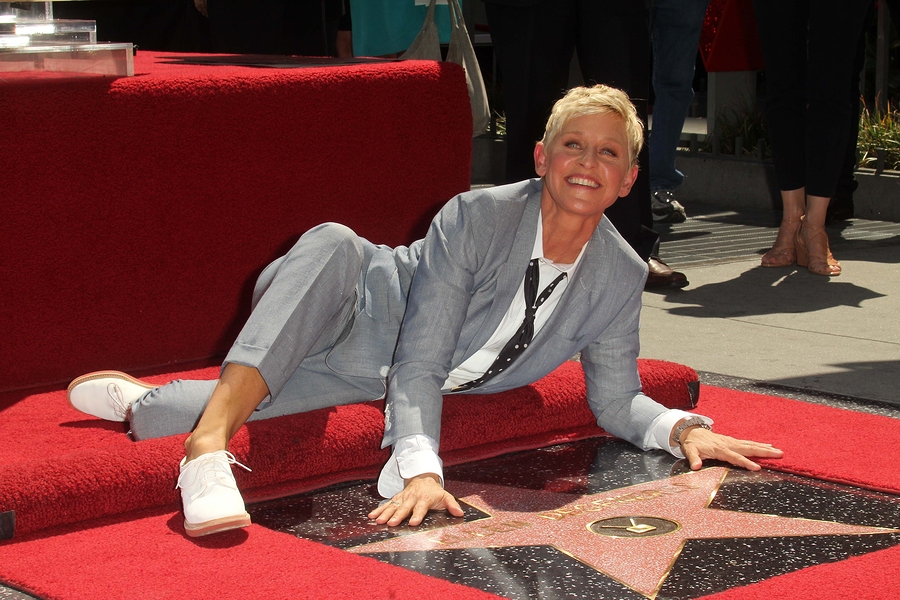 What is Ellen DeGeneres’s full name?

Ellen’s full name is Ellen Lee DeGeneres which is the same name she goes by professionally, or just ‘Ellen’. She does not often use her middle name as part of her public persona. Ellen’s name is not short for another name, which is unusual as it is often a diminutive version of other names.

What is Ellen DeGeneres’s age?

Ellen DeGeneres was born in January 26, 1958. She is 61 years of age and has been a successful comedian and talk-show host since the 90s. Ellen was born in Metairie, Louisiana and grew up there. She looks youthful for her age, thanks to her anti-aging routine, vegan, sugar free diet and daily yoga sessions.

Who is Ellen DeGeneres’s family?

Ellen DeGeneres is the daughter of a speech therapist, Elizabeth Jane (nee Pfeffer) and Elliot Everett DeGeneres and insurance broker. She has a brother named Vance, a musician and producer. Her parents separated in 1973 and her mother remarried to a man named Roy Gruessendorf, a saleman. Ellen moved with her mother, whilst her brother stayed with their father. She was molested by her stepfather at 15 or 16 years of age. Her biological father passed away in 2018.

Where did Ellen DeGeneres go to school?

Ellen DeGeneres completed her early school years in Metairie, Louisiana and went to Grace King High School, before attending Atlanta High School and she graduated in 1976.She later moved to New Orleans and went to the University of New Orleans. Her major was in communication studies but she only completed one semester before she dropped out and got a job doing clerical work at a law firm. Her early jobs including waitressing, house painting, bartending and being a hostess.

Where does Ellen DeGeneres live?

Ellen DeGeneres has an extensive property portfolio. She currently resides in a home that she purchased in 2019 for $27 million. The home is located in Montecito, California and is 8,188 square feet. The home is Balinese style and includes an additional vacant land parcel for property extensions. The home has five bedrooms and a two bedroom guest house as well as an infinity pool. They also own a number of other luxury homes.

What is Ellen DeGeneres’s height and weight?

Ellen DeGeneres is 5 feet 7 inches tall or 170 cm, and she weighs in at around 59kg. She is a small statured woman who has always been thin. She keeps her figure looking trim with regular yoga and a healthy vegan diet. Ellen DeGeneres also regularly does crunches to stay looking thin.

What nationality is Ellen DeGeneres?

Ellen DeGeneres was raised as a Christian Scientist. The religion is a new religious movement that argues that illnesses can be healed through prayer. Followers of Christian Science don’t go to doctors or take medication. The religion resulted in Ellen having a slightly unconventional childhood. Ellen does not ascribe to the religion as an adult.

What is Ellen DeGeneres famous for?

Ellen DeGeneres is famous for being an American comedian, popular television host, actress, writer, voiceover artist and producer. She was the star of the popular sitcom, Ellen, from 1994 to 1998. She has been the host of her own TV talk show, The Ellen DeGeneres Show, since 2003.

How did Ellen DeGeneres’s career start?

Ellen DeGeneres initially started performing stand-up comedy at small venues like coffee houses. She was an emcee at Clyde’s Comedy Club by 1981 and began to tour nationally. She was named the funniest person in America in 1984. Her early career in comedy led to her getting TV roles in the 90s.

What was Ellen DeGeneres’s breakthrough?

DeGeneres’ first TV role was on a sitcom called Open House. She later appeared on the sitcom Laurie Hill but the show was cancelled after only four episodes. She was then cast in These Friends of Mine which later became Ellen. The show was popular because of Ellen’s humour, she was often referred to as the female Seinfeld. The show peaked in popularity in 1997 when Ellen announced that she was a lesbian when speaking to Oprah Winfrey. The episode was one of the highest rated on the show. The TV show Ellen’s ratings fell because the promotional budget for the show was cut. The show was cancelled in 1998 and Ellen returned to her stand up career. She returned for a time to TV with a sitcom, The Ellen Show, which was cancelled after 13 episodes. Ellen then started a talk show, The Ellen DeGeneres Show which has won many Emmy awards.

What has Ellen DeGeneres done since her breakthrough role?

Ellen DeGeneres talk show has been on the air since 2003, she has also made a number of film appearances and don voiceover work for kids films such as Nemo. She also appeared for once season on American Idol. She also hosts a game show called Ellen’s Game of Games on NBC.

What is Ellen DeGeneres’s net worth?

Ellen DeGeneres’ is worth approximately $450 million and is one of the highest paid women in the entertainment industry. She earns a salary of $75 million a year thanks to her television talk show and career as an actress. She also makes extra money through her product endorsements and her luxury real estate investments.

Who has Ellen DeGeneres married?

Ellen DeGeneres has been with her partner, Portia de Rossi since 2004. The couples got married in 2008 after the same sex ban was overturned. In 2010 Portia de Rossi petitioned the court to legally change her name to Portia Lee James DeGeneres, which was granted in 2010.

Who has Ellen DeGeneres dated?

Ellen dated Kat Perkoff and Teresa Boyd before she came out. Ellen DeGeneres later came out in 1997 and subsequently dates Anne Heche until 2000. She then has a relationship with Alexandra Hedison from 2000 and 2004. The couple made an appearance on the cover of The Advocate after their separation had already occurred. Ellen then started dating her current wife, Portia de Rossi.

Does Ellen DeGeneres have kids?

Ellen DeGeneres’ does not have any children with her partner Portia de Rossi. Ellen, who is already 61, has previously told the media about how she has no intention to bring children into the world. Ellen has stated that she feels like it would be too much of a commitment and that she doesn’t feel like children will ever be a part of her future. Despite not having any of her own, she loves children and regularly features them on her show in different segments.