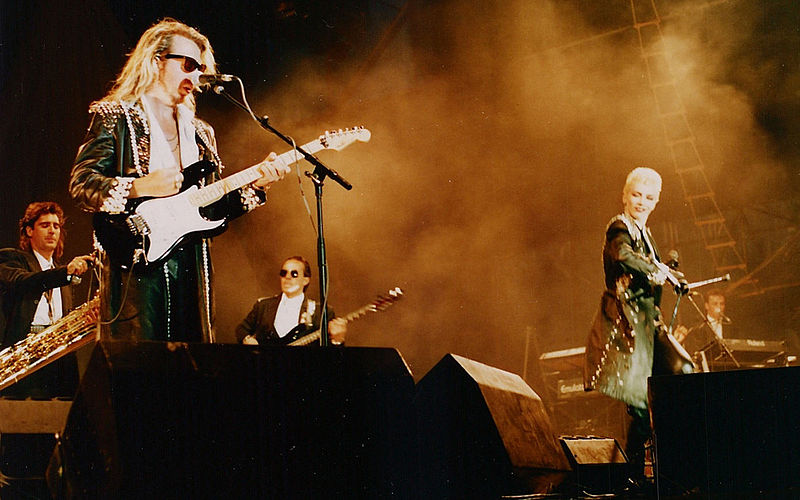 The Eurythmics are famous for being a British pop duo which included members Annie Lennox and Dave Stewart who were both previously members of the band the Tourists. The band was first formed in Wagga Wagga, Australia after the Tourists broke up in 1980. Lennox and Stewart’s first album was released in 1981, and didn’t initially achieve a great deal of success until their second album ‘Sweet Dreams (are made of this)’ found international attention when it was released in 1983. Stewart has become a sought after record producer, whilst Lennox has had a highly successful record career since 1992.

The band reunited in 1999 and 2005 after long periods of time on hiatus to record new music. The duo have been highly awarded over the course of their career, earning an MTV video music award for best new artist in 1984, a Grammy Award for Best Rock Performance by a Duo with Vocal in 1987, a Brit Award for Outstanding Contribution to Music in 1999 and they were inducted to the UK Music Hall of Fame in 2005. The group has sold more than 75 million records around the world and have been nominated on two occasions for inclusion in the Rock & Roll Hall of Fame.

Annie Lennox and Dave Stewart met in a restaurant in London in 1975, Lennox was working at the restaurant at the time. The duo first began playing together in 1976 in a punk rock band that was known as The Catch. The pair released only one single with The Catch in 1977 before the band changed into The Tourists. At this time Lennox and Stewart had become romantically involved. The band achieved a small amount of commercial success but the band was burdened by personal issues and creative tensions which meant the experience was difficult for everyone involved. Both Lennox and Stewart decided that the band was not the best way for them to explore their music and they decided to pursue a more flexible project and freer form of artistic expression. They were both interested in the pop music sound but wanted to experiment with avant-garde techniques.

It was whilst they were performing at a hotel in Wagga Wagga with a mini-synthesiser that the pair decided to become a musical duo. They chose the name Eurythmics after an exercise system that Annie Lennox had come across as a child and decided that they would be the only official band members and songwriters – they planned to involve others for collaborations. The duo was signed by RCA Records and it was around the same time that they split up as a couple. Around this time the pair was managed by Kenny Smith and Sandra Turnbull from Hyper Kinetics.

Lennox and Stewart recorded their first album which was titled ‘In The Garden’ with producer Conny Plank, who had previously produced for the Tourists. The album was recorded in Cologne and was released in October 1981. The album included pschadelic, kraurock and electropop influences and featured musicians Holger Czukay, Jaki Liebezeit, Clem Burke (from Blondie) and Robert Gorl from D.A.F, as well as Tim Wheater. The album was not commercially successful but the pair began touring to promote the record with backing tracks and electronics.

In 1982 the Eurythmics retreated to London and used a ban loan to start a small studio above a picture framing factory so that they could record without paying studios. They started to include more instruments in their music and recorded many tracks in the studio with a number of different line-ups. The three singles they released in 1982 did not perform well however when they were initially released in the UK. Despite having more creative freedom, they were struggling to achieve commercial success and looking after so many elements of the process (including carting their own equipment) was beginning to take a toll on their health, Lennox suffered a nervous breakdown whilst Stewart suffered from a collapsed lung.

The commercial breakthrough for the Eurthmic’s came with the release of their second album ‘Sweet Dreams (Are Made of This)’ which was released in 1983. The title track of the album introduced an orange-haired Lennox to fans and featured a dark, strong synth bass sound. The song made it to number two on the UK singles chart and became one of the biggest selling singles in the UK, it also later topped the US Billboard Hot 100. The trajectory of the band changed immensely from then on. Lennox became an iconic pop figure and was featured on a number of industry magazines, including Rolling Stone. A past single, ‘Love Is A Stranger’ was re-released and quickly became a hit on the charts. The working title of the album was originally ‘Invisible Hands’ which was based on a track that didn’t make it onto the album. The track was inspired by an independent label called Invisible Hands music which was well known for releasing music by Hugh Cornwall, Mick Karn and Hazel O’Connor.

The pair quickly recorded a new album, titled ‘Touch’ which they released in 1983. The album became the Eurythmics first number one album in the UK and included the hit songs ‘Who’s That Girl?’ which peaked at number three in the UK with a video that featured Lennox as a gender bending Elvis Presley. The video also included cameos from Hazel O’Connor, Kate Garner, Thereza Bazar, Jay Aston, Cheryl Baker, Kiki Dee and Jacqui O’Sullivan. The single ‘Right by Your Side’ was also in the top 10 in the US whilst ‘Here Comes The Rain Again’ made it to number eight in the UK and number four in the US.

The following year they released ‘Touch Dance’ which was four remixes of tracks from ‘Touch’ aimed at the club market. They also released a soundtrack for the film ‘1984’ in the same year, the film was a modern-day adaptation of George Orwell’s novel ‘Nineteen Eighty-Four’, however the director complained that the soundtrack had been forced on him by the studio and that it had overtaken the original score.

The Eurythmics also said that they felt they had been misled and the album was taken off the market during litigation. The first single of the album ‘Sexcrime (Nineteen Eighty-Four) became a hit in the UK, Australia, the US and across Europe.

The pair’s next album ‘Be Yourself Tonight’ was recorded in a single week in Paris. The album was influenced by R&B and had more of a ‘band sound’ with real drums, bass and guitar. Up to twelve other musicians were also included on the album, included band members from the Heartbreakers, Stevie Nicks on Harmonica, bass guitarist Dean Garcia, and vocals from Aretha Franklin and Elvis Costello. The album again saw the Eurythmics dominate the charts around the world, released in 1985 it included the hit songs ‘Would I Lie to You?’ which went to number one in Australia, ‘There Must Be An Angel (Playing with my Heart) which was their sole UK hit single and ‘Sister are doin’ for themselves’ which became known as an iconic feminist anthem.

Their next album was titled ‘Revenge’ and it was released in 1986. The album also had more of a band sound and continued the strong sales trend of the band in the UK. The song ‘Missionary Man’ reached number one on the oriented rock charts in the US and the album was later certified double platinum in the UK. The band embarked on a worldwide tour to promote the album and later released a live concert video of their performances in Australia. In 1987 they released ‘Savage’ which represented a shift in their sound and included samples and drum loops. The song ‘I Need A Man’ from the album became a staple for the band and the album was ceritifed platinum in the UK although it did not do well in the US. In 1989 they released the album ‘We Too Are One’ which went to number one in the Uk.

The duo disbaned in the 90s after many years of recording and touring. Lennox took time away from music to have a baby and released a solo album in 1992. In the late 1990s the duo reunited to record their album ‘Peace’ which led to a European tour. In 2014 they again reunited to perfom at Sting’s 30th benefit concert for his Rainforest Foundation fund.