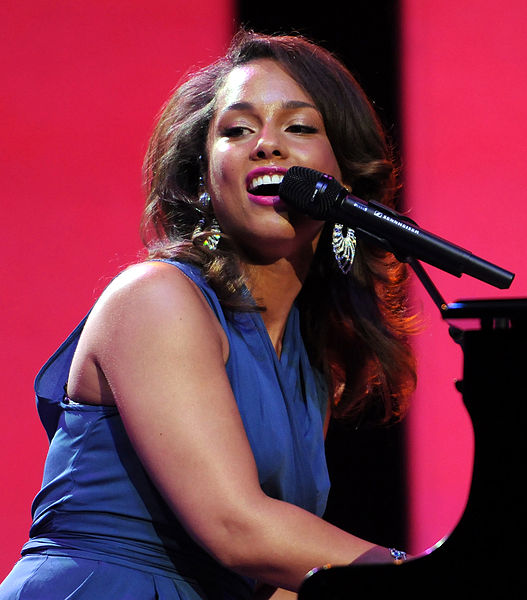 Alicia Keys (birth name Alicia Augello-Cook) is famous for being an American singer, musician and actress. She is a classically trained pianist and has been composing songs since she was only twelve years old; she was signed to Columbia Records at the age of fifteen before signing with Arista Records. Over the course of her career she has sold more than 65 million records around the world and has earned a reputation as a musical icon. She was named by Billboard as one of the top R&B artists of the 2000s. She has also been called one of the 100 Greatest Artists of all time by VH1. In addition to her singing career, Alicia Keys is also a humanitarian and philanthropist known for her activism. She is the co-founder and global ambassador of the non-profit HIV/AIDS organisation Keep a Child Alive.

Alicia Keys was discovered in 1994 when manager Jeff Robinson met a then 13 year old Keys because she was involved in his brothers youth organisation called Teens in Motion. His brother had been providing the teen with vocal lesion and Robinson’s brother had told him that he should meet her, although he had been disinterested but agree to watch her perform with her group. He was impressed by her singing ability he decided to help her develop her talent. He wanted the budding singer to know what to expect from the music industry so he began to bring her along to meetings and negotiations with his record label. Robinson pushed her to pursue a solo career, but she was resistant as she preferred to sing in a group. She eventually took his advice when her singing group broke up and he introduced her to the A&R executive Peter Edge.

Alicia Keys created a demo to show label executives with the helped of Robinson and Edge and a bidding war quickly followed. Edge wanted to sign her but he couldn’t as he was about to leave Warner Bros. Records. Columbia Records offered her a deal which she signed at the age of 15. The singer was also completing high school and gained early admission to Columbia University with a scholarship. She began to attend university after graduating at the age of 16 and worked on her music career at the same time, before eventually dropping out of Columbia so that she could focus on her music career.

Columbia Records had employed a team of people to help shape the singers musical style and image but were not open to any of the singers own contributions. Alicia Keys stated that she was dismissed by label executives and sexually propositioned. The singer decided that she would need to record her own music to get it to sound the way she wanted and so she purchased her own equipment. The singer decided she wanted to leave the label who made it difficult for her to leave, saying that they would keep everything she had produced even though they didn’t want to use it or release.

After being released from her contract she signed with Arista Records, as Edge had by that time joined the label. In 2000 however she followed manager Davis to the new label J Records.

Alicia Keys career started off well, she performed in The Tonight Show to promote her upcoming debut album and was asked to perform on Oprah during a special to promote women in music. The singer performed on the show a week before her wedding and released her lead single ‘Fallin’ in April 2000 and the song went to number one.

Her debut album ‘Songs in A Minor’ was released in June 2001. The album was influenced by R&B, soul and jazz. The album was critically acclaimed and debuted at number one on the charts in the US selling 236,000 units in its first week. The word of mouth popularity and exposure of the record on the radio and television prompted record stores to request another 450,000 copies the following week and the album went on to sell 12 million copies globally. The album was certified six times platinum and made the singer the best-selling new artist of the year.

After releasing her debut album the singer released her second album ‘The Diary of Alicia Keys’ in 2003. The album debuted at number one and sold more than 618,000 copies in its first week of releasing, making her the female artist with the most album sales in a single week for 2003. The album was certified four times platinum and was the second largest selling R&B album by a femal artist.

She won five Grammy Awards during the 2005 awards ceremony. The singer made an appearance on MTVs Unplugged in 2005, performing a number of her own original songs and covers. The album of the performances debuted at number one on the US Billboard charts and was certified platinum. The album sold more than four million units throughout the US.

In 2006 she gave a voiceover as Mommy Martian in ‘Mission to Mars’ for the children’s TV show ‘The Backyardigans’. In the same year the singer suffered a near metal breakdown after the death of her grandmother. Her family was heavily dependent on her and the pressure prompted her to go on a trip to Egypt.

In 2000 she appeared in the film ‘Smokin’ Aces’ alongside Ben Affleck and Andy Garcia. She also co-starred in ‘The Nanny Diaries’ alongside Scarlett Johansson and Chris Evans. The singer released her third album in November 2007, titled ‘As I Am’ the album debuted at number one on the charts and sold more than 742,000 copies in its first week. The album was her fourth consecutive number one album and tied her with Britney Spears for the record of the female artist with the most consecutive number one debuts.

Her single ‘No One’ earned her an award for the Best Female R&B performance and Best R&B song at the 2008 Grammy Awards.

In 2009 she starred in the film ‘The Secret Life of Bees’ which earned her a nomination for Supporting Actress at the NAACP Image Awards. The singer released her fourth studio album ‘The Element of Freedom’ in 2009. In 2011 her first album was re-released as a deluxe collector’s edition and the singer embarked on a promotional tour which featured her playing on her piano. In 2011 she took part in a short film project as the director, the series documented the experienced of five woman who had been affected by breast cancer. In 2012 the singer released her fifth album ‘Girl on Fire’.

More recently the singer has taken part in The Voice as a coach in 2016 and released the short film ‘The Gospel’. In 2017 she collaborated with Kanye West on the song ‘Low Lights’ and featured on Justin Timberlake’s 2018 album ‘Man of the Woods’. In 2019 the singer hosted the Grammy Awards and announced the upcoming release of her memoir.

It was also announced that the singer was the buyer of ‘Razor House’ a community centre in San Diego. She also released the single ‘Show Me Love’ ahead of her new album. The song was commercially successful. The singer hosted the 2020 Grammy Awards and announced that her seventh album ‘ALICIA’ was due to be released in March 2020.