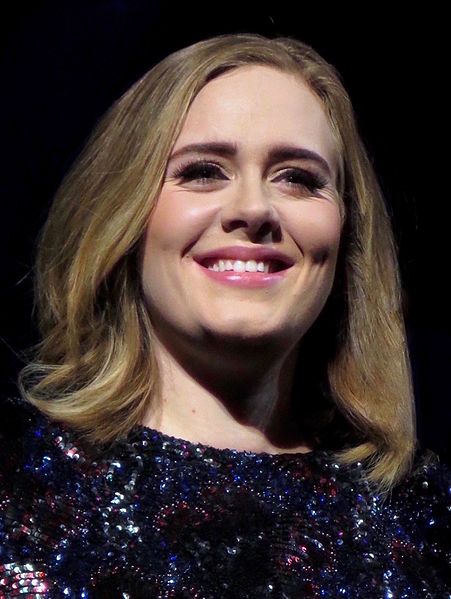 Adele is famous for being an English singer and songwriter. Since the release of her debut album ‘19’ Adele has received widespread critical acclaim and commercial success for her music. The singer has been highly acclaimed since 2008 when she burst onto the scene with her first album which went on to be certified eight times platinum. Adele has since gone on to release the highly successful album ‘21’ and ‘Skyfall’.

She has become one of the best-selling artists in history, earned herself a number of Guinness World Records and won many, many accolades including an Academy Award, Grammy Award and a Golden Glove. She has also earned a number of Brit and American Music Awards. The release of ‘Skyfall’ saw her break first-week sales records and she has earned a record-tying six Grammy Awards.

Adele has been recognised as the Artist of the Year by Billboard in 2011, 2012 and 2016. She has also been named one of the most influential people in the world in 2012 and 2016. The singer has sold more than 120 million records around the world.

Adele attended the BRIT School of Perfoming Arts, she graduated from the school in 2006 alongside her classmates Leona Lewis and Jessie J. Following graduation she published two songs on the online publication ‘PlatformsMagazine.com’. The songs were recorded during a class project and her friend posted the songs on MySpace where they attracted the attention of Richard Russell from music label XL Recordings.

Adele was recommended to manager Jonathan Dickins by Nick Huggett from XL Recordings and Dickins agreed to become her manager and she was then signed to XL in 2006. The singer was asked to provide vocals for the song ‘My Yvonne’ and it was during the recording session that she met producer Jim Abbiss who would later work with her on her albums ‘19’ and ‘21’. The singer made her first television debut on BBC’s show ‘Later…with Jools Holland’ where she performed ‘Daydreamer’. Adele released the song ‘Hometown Glory’ in 2007; the song quickly got her a lot of attention.

In 2008 she performed with Damien Rice as her supporting act and won the first Brit Awards Critic’s Choice award. The singers album ‘19’ was named for the age when she wrote many of its songs and it went to number one on the British charts. The album was released in the United States in June after she signed a deal with Columbia Records. She began a tour in North America to promote the album in the same month but she cancelled the tour to be with her former boyfriend. She later told Nylon magazine that she couldn’t believe she’d made the decision.

By mid-2008 it seemed like she singer had failed to break into the US until she was booked to appear on Saturday Night Live, the episode earned the show its best ratings in 14 years and included performances of ‘Chasing Pavements’ and ‘Cold Shoulder’. Following her appearance on the show her album topped the iTunes charts and reached number five on Amazon. The album reached number 11 on the Billboard 200 charts and was later certified Gold.

During the 51st Grammy Awards Adele received the award for Best New Artist and Best Female Pop Vocal Performance; she also received nominations for Record of the Year and Song of the Year.

Adele released her second album ’21’ in 2011, much of the album was about her break-up with a former partner. The sound of the album was heavily influenced by contemporary country and roots sound. The album reached the number one spot on the charts in 30 countries. The singer gave an impressive performance of ‘Someone Like You’ during the 2011 Brit Awards and the song quickly reached number one on the UK charts. Her first album entered the charts alongside ‘21’ and both ‘Rolling in the Deep’ and ‘Someone Like You’ were in the top 5 of the UK singles charts – a feat that had not been achieved since The Beatles in 1964.

The album sold more than 3.4 million copies in the UK alone and became the top selling album of the 21st century. Her song ‘Set Fire to the Rain’ was the singer’s third number one single on the US Billboard charts. In order to promote the album the singer began her ‘Adele Live’ tour through North America however she had to cancel the remainder of the tour in October 2011 due to a vocal cord haemorrhage which required her to rest for an extended period of time to avoid permanent damage.

Adele underwent microsurgery to remove a benign polyp. She made a comeback following the surgery during the 2012 Grammy Awards where Kanye West was also present and where Adele won in all six categories that she was nominated for, making her the second female singer in history to win that many categories at the Grammy’s. The album became the best-selling album in the world in 2011 and 2012 and by 2016 it has sold more than 31 million copies. Adele is the first and only artist to earn diamond certification on an album in under two years.

Speculation around the release date of Adele’s album started to mount after she released a cryptic message the day before her 26th birthday, prompting fans to think that the album would be titled ‘25’ and possibly released in 2014 although it was late revealed that the release would more likely be in 2015. Ahead of the album’s release Adele released the song ‘Hello’ which broke the Vevo record for most views in a day.

The song debuted at number one in the UK and sold more than 330,000 copies in its first week. The song also debuted at number one in a number of other countries around the world including Australia, France, Canada, New Zealand, Ireland and Germany. By the ened of the year the single had sold more than 12.3 million units and was the years seventh best-selling single, even though it had been released late in the year.

In the same year a BBC One special title ‘Adele at the BBC’ was announced, the singer was also confirmed to be appearing on Saturday Night Live. After its release in November her new album ‘25’ debuted at number one and became the fastest selling album in UK history. The album sold more than 800,000 copies in its first week and broke records in the US with more than 3.38 million albums sold in a single week in the US.

The album was the best-selling album for 2015 and has sold more than 20 million copies around the world. The singer embarked on her 2016 tour through the UK and US, breaking sales records. She also performed for the first time in Australia in 2017, breaking records with crowds of more than 100,000 at Sydney’s ANZ stadium. The singer won five awards at the Grammy Awards in 2016 and was named artist of the year by Billboard.

Adele has begun work on her next album which is reportedly due for release in September 2020.