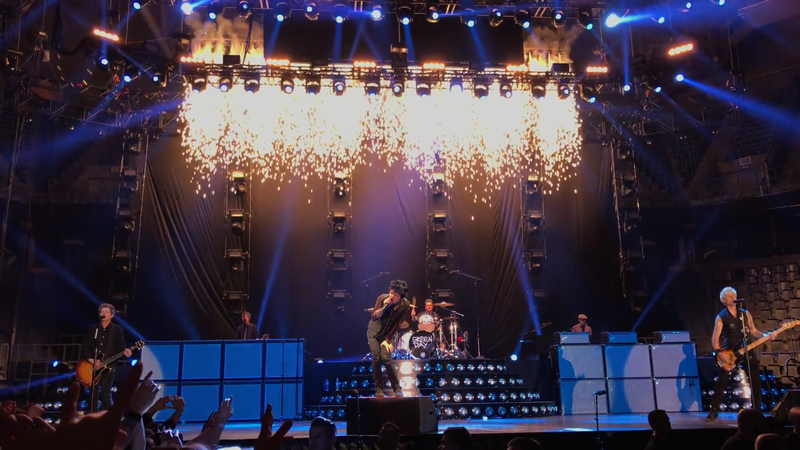 Green Day are famous for being an American rock band first formed in California in 1986. The band is famously lead by Billie Joe Armstron and Mike Dirnt. The band originally began during the late 80s to early 90s punk trend and the band has often been credited with bringing punk music into the mainstream consciousness. The band has sold more than 85 million records around the world and won many awards including five Grammy awards. A Broadway production of ‘American Idiot’ debuted in 2010 and was nominated for a number of awards included three Tony awards. The band was inducted into the Rock and Roll Hall of Fame in their first year of eligibility in 2015.

Green Day first began in 1986 after Billie Joe Armstrong and his friend Mike Dirnt, who were 14 years old at the time started a band called ‘Sweet Children’. The group performed for the first time in 1987 at Rod’s Hickory Pit. The group began working with drummer John Kiffmever in 1988 and in that same year they were discovered by Larry Livermore, the owner of Lookout! Records who signed the band to his label. The band recorded their debut EP in 1989, titled ‘1000 Hours’ in 1989 and decided to drop the name ‘Sweet Children’ and adopt the name Green Day – the name was chosen as a result of the bands penchant for cannabis.

The band released their debut studio album the following year, 39/Smooth and two EP’s, ‘Slappy’ and ‘Sweet Children’. Shortly before the band’s first nationwide tour Kiffmeyer left the band and Tre Cool from the The Lookouts joined as a temporary replacement (he later became the bands permanent drummer). The band toured for the majority of 1992 and 1993 and played a number of shows throughout Europe. The band released their second studio album, ‘Kerplunk’ which sold 50,000 copies throughout the United States.

The band’s second album was an underground success and garnered the band a lot of interest from major record labels who became interested in signing the band. The band left their lavel and signed with Reprise Records after the gained the attention of producer Rob Cavallo.

After the band signed with their new label Reprise they began developing the album ‘Dookie’ which was recorded in three weeks and released in 1994. The album was commercially successful and received extensive coverage on MTV with the music videos ‘Longview’, ‘Basket Case’ and ‘When I Come Around’. The album sold more than ten million copies in the United States alone and during a performance in Boston in 1994, fans started a rampage which result in more than 100 people being injured and 45 arrests. The band took part in the 1994 Woodstock festival and started the now infamous mud fight which helped to increase the band popularity. The band won a Grammy Award in 1995 for their album.

In 1995 the band debuted the single ‘J.A.R’ for the Angus soundtrack. The single went to number one on the modern rock charts and was followed up by the bands fourth album, ‘Insomniac’. The album was well-received by critics and sold around three million copies throughout the United States.

The band took a brief hiatus in 1996 and then began working on their new album in 1997. The album, ‘Nimrod’ was a change from the bands usual sound. Released in 1997 the album featured punk rock, surf rock and ska sound. The band appeared on an episode of ‘King of the Hill’ to promote the album and embarked on a tour that lasted most of 1998. In 2000 the band released the album ‘Warning’ and began their Warped Tour in 2000. The album received mixed reviews, despite producing the hit songs ‘Minority’ and ‘Warning’. The album was only certified Gold and marked the beginning of a decline in popularity for the band. In 2002 the band co-headlined with Blink-182 during the Pop Disaster Tour.

In 2003 the band began recording new material for an album but the band abandoned the project after some of the recordings were stolen from the studio. Around the same time a band called The Network came out with an album called Money Money 2020 which was rumoured to be a side project for the band. There was a public feud between the bands and a number of journalists referred to it as a side project but the reports were not confirmed until 2013.

The band collaborated with Iggy Pop in 2003 on an album called ‘Skrull Ring’. In 2004 the band debuted a cover of ‘I Fought The Law’. Their next album ‘American Idiot’ went number one of the charts. The band called the album punk opera and was about the life of American’s under an idiot ruler. The album quickly became protest art, released only a short while before the re-election of George W. Bush. The album sold 6 million copies around the United States. The band toured extensively during 2004, appearing in countries such as Japan, Australia, and throughout the United Kingdom and South America. The bands final show was in Sydney and Melbourne in December 2005.

Green Day got involved in a number of smaller projects following the success of American Idiot and released the album ‘Stop Drop and Roll!!!’ in 2008. The band took a nearly five year break between their albums ‘American Idiot’ and ‘21st Century Breakdown’ which was released in 2009. The band toured for much of 2009 and 2010. Wal-Mart refused to carry the album and requested a censored version of the album be released by the band but they refused.

In 2009 the band began developing a Broadway version American Idiot in conjunction with Michael Mayer.  The show premiered with the new single ‘When it’s Time’ in 2010 which was released on iTunes.

The band also released their own video game titled ‘Rock Band: Green Day’. The band released a live album in 2011 which consisted of live recordings of their 21st Century tour. The album was titled ‘Awesome as Fuck’. The band played a number of secret shows and entered the studio in 2012 to begin recording new material. The band released the albums ¡Uno!, ¡Dos!, and ¡Tré! in 2012. The albums received mixed responses from fans. In 2013 the band started its next tour and broke attendance records at the Emirates Stadium. In 2015 the band started recording their next album and released the Christmas song ‘Xmas Time of the Year’. Their single ‘Bang Bang’ was released in 2016 ahead of the release of the album ‘Revolution Radio’. The band made a political statement against Donald Trump in the same year when they played at the American Music Awards.

Green Day released a greatest hits compilation album titled ‘God’s Favourite Band’ in 2017. More recently the band has released their Woodstock 1994 appearance onto vinyl for the first time, they also announced the Hella Mega Tour alongside Fall Out Boy and Weezer and released a single titled ‘Father of All…’ ahead of their album ‘Father of all Motherfuckers’. The band has also signed a two-year promotional agreement with the National Hockey Leave as of the 30th of September 2019.