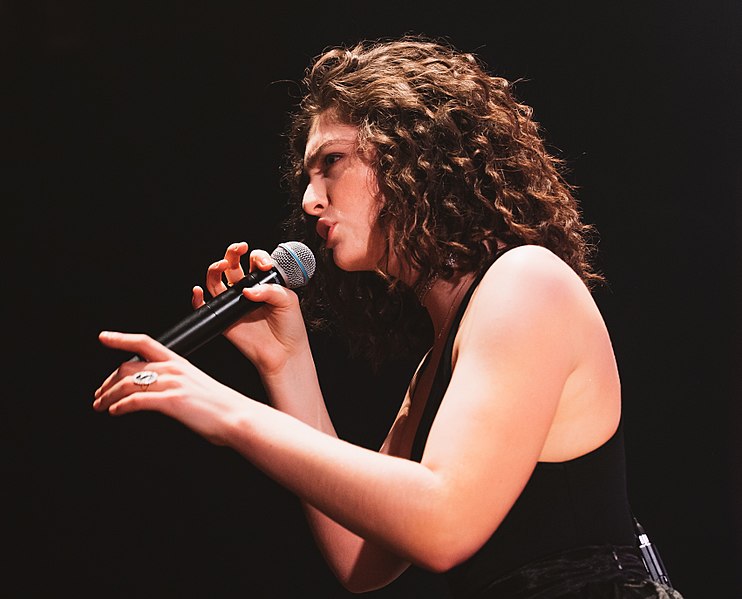 Lorde (birth name Ella Marija Lani Yelich-O’Connor) is famous for being a singer and songwriter from New Zealand. Lorde has become well known for her unconventional sound and impressive song-writing ability. She is also known for her young age after first entering the spotlight at only 16 years of age. The singer was born in Auckland and began performing at local venues in her early teens.

The singer first rose to prominence with the release of her chart-topping track ‘Royals’ and has since then gained a lot of commercial success.

Lorde’s sound has been described as electo-pop, dream pop and indie electro. Similar to that of Taylor Swift’s new style. She has one a number of awards and accolades including two Grammy Awards. She has also earned a Golden Globe nomination. The singer has sold more than five million albums around the world.

In 2009 Lorde won a local school talent show as part of a duo with her friend Louis McDonald and they were invited to appear on Jim Mora’s afternoon show a few months later where they performed a cover of Pixie Lott’s song ‘Mama Do (Uh Oh, Uh Oh)’ and the Kings of Leon song ‘Use Somebody’. McDonals’d father subsequently sent the duo’s recordings from the radio show to Universal Music Group executive Scott Maclachlan who signed Lorde to the label for development. Lorde was also a member of her school band which won third place during a battle of the bands competition at the Bruce Mason Centre.

Prior to being signed she performed regularly with Louis McDonald at local venues around Auckland. After being signed for development she began working with vocal coach Frances Dickinson who helped the singer with twice weekly vocal lessons over the course of a year. Whilst her singing voice was being developed Scott Maclachlan tried to partner the singer with a number of different producers and songwriters but achieved little success. Lorde began songwriting as a result and credited her songwriting ability to reading short fiction.

The singer performed her first original music for the first time at Victoria Theatre in 2011 before she was paired with Joel Little, a producer and songwriter who helped her record five songs for her first extended play. The pair recorded the EP in three weeks at Golden Age Studios in Morningside, Auckland. She continues to attend school during this time between 2010 and 2013 but did not return for her final year of school as her career had begun to take off.

Maclachlan was excited about the completion of Lorde’s EP ‘The Love Club EP’ but was concerned about its profit potential she was still relatively obscure and unknown. In 2012 the singer released the EP on SoundCloud and made it vailable for free download. Her label released the EP commercially the following year after the EP had been downloaded 60,000 times. The EP peaked at number two in both New Zealand and Australia. The song ‘Royals’ was critically acclaimed and a commercial success, selling more than 10 million units around the world.

Lorde released her debut album ‘Pure Heroine’ in 2013, the album contained the single ‘Royals’ in 2013. The album received widespread critical acclaim and was regularly recognised as one of the best albums of the year. The album received a great deal of attention and analysis because of its song lyric content and music videos related to the disillusionment of suburban teenagers. The album had sold more than one million units by early 2014, making it the first since Adele’s album ‘19’ in 2008 to achieve the feat. The album earned Lorde a Grammy nomination for Best Pop Vocal Album and included a number of successful singles, including; ‘Tennis Court’, ‘Team’, ‘Glory and Gore’.

In 2013 the singer signed a publishing deal with Songs Music Publishing, following a bidding war between Sony Music Entertainment and UMG. The agreement meant that the publisher could distribute Lorde’s music for films and advertising and lead to the singer featuring on the sountrack of ‘The Hunger Games: Catching Fire’ with a cover of the song ‘Everybody Wants To Rule The World’.

Lorde was quickly recognised as one of the most impressive and influential teenagers in the music industry, the singer was named the most influential teenager in the world by Time in 2013 and 2014. She also appeared in the Forbes 2014 edition of 30 Under 30; she was the youngest person to appear in that year. The singer also made it to Billboard’s 21 under 21 list in 2013, 2014 and 2015.

At the beginning of 2014, the singer began performing at Festivals around the world including Sydney’s Laneway festival, the Chile, Argentina and Brazil Lollapalooza festivals and California’s Coachella Festival. The singer then began her first international concert tour throughout North America which saw her join Nirvana for a performance during the band’s induction into the Rock and Roll Hall of Fame. Lorde was also responsible for curating the soundtrack of the film ‘The Hunger Games: Mockingjay – Part 1’ which she recorded four tracks for including ‘Yellow Flicker Beat’ which earned the singer a Golden Globe nomination for Best Original Song.

Lorde began 2016 by purchasing a home in Herne Bay following the end of her relationship with New Zealand photographer James Lowe.

During the 2016 Brit Awards the singer gave a tribute performance with David Bowies final touring band, singing the song ‘Life on Mars’. The singer was chosen for the tributed because she was admired by Bowies family and seen as the future of music. The following year the singer worked with New Zeland duo Broods as a co-writer on their song Heartlines.

In March 2017 the singer released the lead single from her upcoming album ‘Melodrama’. The single ‘Green Light’ was well received by critics and a number of publications named it song of the year. The song was moderately successful, charting in New Zealand (where it reached number one), Australia and Canada.

Lorde’s new album ‘Melodrama’ was released in June 2017. The album was a more mature approach for the singer and focused on her feelings following her break-up. The album received critical acclaim and reach number one in the United States on the Billboard 200. The album also reached number one in Australia, Canada and New Zealand. The album earned the singer a nomination for Album of the Year.

To help promote her new album the singer began an international concert tour which began in Europe in 2017 and featured Khalid as her supporting act. She began the North American leg of the tour in 2018 with the opening acts Run the Jewels, Mitski and Tove Styrke. The singer was embroiled in a political scandal in 2017 when her planned June 2018 concert in Israel was cancelled following a campaign by Palestinian activists who were in support of the Boycott, Divestment and Sanctions.

The singer did not explain her choice to cancel the concert but she did admit that she had not been aware of the level of political turmoil in Israel and that she felt the right decision was to cancel. Pro-Israel groups were critical of the choice to cancel.