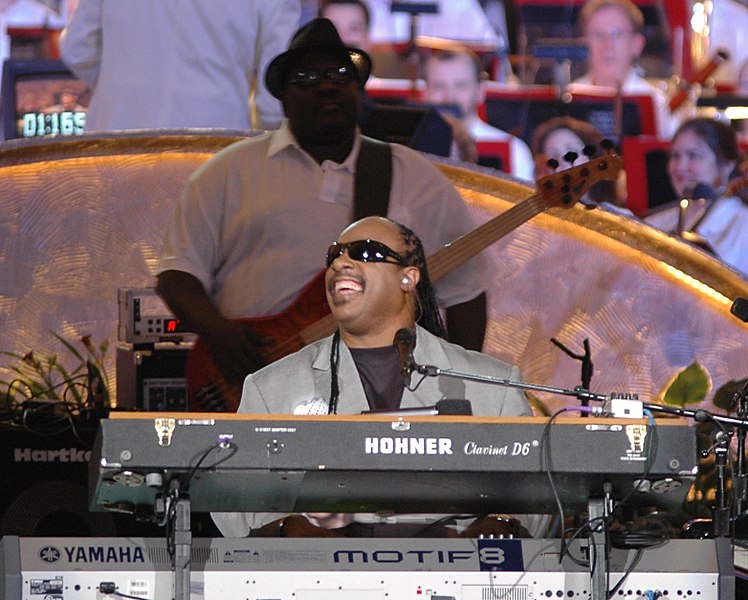 Stevie Wonder (full name Steyland Hardaway Morris) is famous for being an American singer, songwriter, musician and music producer. He is known for being one of the most successful songwriters in musical history and is well-known for his innovative sound and clever use of electronic instruments.

Steve Wonder is known for blending a number of musical genres including pop, rhythm, blues, soul, funk and rock. The singer has been blind since not long after his birth and got his stage name due to the fact that he was a child prodigy nicknamed ‘Little Stevie Wonder’.

He was signed to the Motown label Tamla at the age of only eleven. He has the distinction of being the youngest artist in history to top the Billboard Hot 100 charts, after his song ‘Fingertips’ made it to number one when he was aged thirteen. Stevie Wonder has sold more than 100 million records globally, making him one of the top selling artists in history.

He has won 25 Grammy Awards and is tied with Frank Sinatra for the most Album of the Year wins and is the only artist to have won with three consecutive albums. He is one of the most highly awarded musical artists in history. Stevie Wonder has been inducted into a number of Halls of Fame, including the Rhythm and Blues Music Hall of Fame, Rock and Rll Hall of Fame and the Songwriters Hall of Fame.

Stevie Wonder was born on the 13th May 1950 in Saginaw, Michigan. He is the third born child out of six siblings and the son of Calvin Judkins and Lula Mae Hardaway. Stevie Wonder was six weeks premature at his birth. The oxygen rich environment of his hospital incubator and his premature birth contributed to retinopathy of prematurity which caused blindness. The condition causes the eyes to stop developing and the retinas to detach. Stevie Wonder began singing in his Church choir as a child at the Whitestone Baptist Church. He also began to play instruments at a young age, playing piano, harmonica and drums and forming a musical partnership with his friend John. The duo would play on street corners and at parties and dances. Stevie Wonder attended Fitzgerald Elementary School until after his first album was released and then he was transferred to Michigan School for the Blind.

Stevie Wonder was first signed to Motown after he sung ‘Lonely Boy’ to Ronnie White who took him into to audition to the record label.  Before he signed the producer Clarence Paul gave the then eleven year old singer his stage name ‘Little Stevie Wonder’. Due to the age of the singer, the record label created a five-year rolling contract which paid royalties to a trust account that would be given to him at the age of 21. The singer and his mother were paid a weekly stipend to help cover their expenses and a private tutor was hired for Stevie Wonder for when he was away on tour.

The singer worked with songwriter Clarence Paul whom helped him record his first two albums. The first album was r1eleased when Stevie Wonder was only 11 years old and included a number of covers of Ray Charles songs. His debut single was ‘I Call It Pretty Music, But The Old People Call It The Blues’ which made it to the 101 spot on the Billboard charts.

The singer then joined the Motortown Review when he was twelve and performed on the Chitlin’ Circuit. A live recording album and a single called ‘Fingertips’ was released. The single became a hit and reached number one on the charts, making Stevie Wonder the youngest ever performer to top the charts. His voice began to change as he got older however and some of the executives on his label were starting to consider cancelling his contract but they were persuaded to keep him on.

. He also began writing his own songs including ‘The Tears of A Clown’ which became a number one hit. He released an instrumental album in 1968 called Eivets Rednow which was not a commercial success. A number of his singles, ‘I Was Made to Love Her’, ‘For Once in My Life’ and ‘Signed, Sealed, Deliver, I’m Yours’ became hits however.

At the age of twenty the singer began working with his wife Syreeta Wright on his next album ‘Where I’m Coming From’ which he released in 1971. The singer allowed his record with Motown to expire on his 21st birthday. He signed a new contract with the label which provided him with a better royalty rate, he released ‘Music of My Mind’ under the label in 1972. Later that same year he released ‘Talking Book’ which including the number one hit songs ‘Superstition’ and ‘You Are the Sunshine of My Life’.

Around the same time he began touring with Rolling Stones around the same time. The following year the singer released Innervisions and in 1974 he released ‘Fulfillingness’ First Finale’ which including the hits ‘You Haven’t Done Nothin’ and ‘Boogie on Reggae Woman’.

The singer then released the double album ‘Songs in the Key of Life’ in 1976 which debuted at number one on the Billboard hot 100 charts, where it remained for 14 non-consecutive weeks.

Stevie Wonder enjoyed the height of his career success and fame in the 1980s, his album ‘Hotter than July’ was his first platinum selling album. He released a retrospective album in 1982 and wrote the hit song ‘Ribbon in the Sky’ and collaborated with Paul McCartney on the number one song ‘Ebony and Ivory’.

Stevie Wonder began to slow down the pace of his album’s release in the 1990s. In 1991 he recorded the soundtracks for Jungle Fever which included the singles ‘Gotta Have You’ and ‘These Three Words’. In 1997 he collaborated on the sog ‘How Come, How Long’ with Babyface. In 2005 he released the album ‘A Time To Love’.

He also collaborated with other artists in the early noughties, such as Busta Rhymes, Dr. Dre and Snoop Dogg. The singer embarked on a North American tour in 2007, his first tour in 10 years. He also sang during Michael Jackson, Etta James and Whitney Houston’s memorials. More recently he has been featured on Mark Ronson tracks and revealed that he is working on two albums.

Stevie Wonder has been married to three women. His first marriage was to Syreeta Wright, whom he collaborated with on music. The couple divorced amicably in 1972. He then got married to Kai Millard in 2001, the couple divorced in 2012 after separating in 2009. He married his current wife Tomeeka Bracy in 2017. The singer has nine children, daughter Aisha Morris who is a singer and son Keita (their mother is Yolanda Summons, a publishing company secretary), a son Mumtaz Morris (whose mother is Melody McCulley), a daughter Sophia and son Kwame (their mother is anonymous) and two sons with ex-wife Kai Millard, Kailand and Mandla Kadjay Carl Steveland Morrise. His youngest child is with his current wife Tomeeka Bracy, daughter Nia and another daughter whose name has not been revealed.