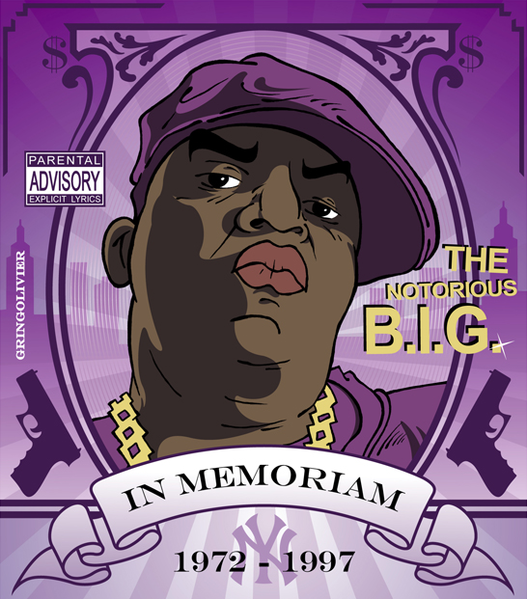 The Notorious B.I.G also known as Biggie Smalls or Biggie professionally (birth name Christopher George Latore Wallace. He was famous for being an American rapper and is regarded by many as being one of the greatest rappers in history. He is well known for his story-telling style which often focused on topics of crime.

Biggie Smalls was born on the 21st of May 1972 and died on the 9th of March 1997 after being gunned down by an unknown assailant, only a year after his rival Tupac was gunned down in a similar manner the year prior. At the time The Notorious B.I.G was accused of being involved in his death. Prior to his death Biggie Smalls had released three albums which have sold more than 21 million albums. He was recently nominated for an induction into the Rock and Roll hall of fame.

The Notorious B.I.G was born in Brooklyn and grew up as the only child of Jamaican immigrant parents, Voletta Wallace and Selwyn George Latore. His mother was a preschool teacher whilst his father was a welder and politician. His father left them when he was only two years old, forcing his mother to work two jobs for most of his childhood to help support them. He was an excellent student and did well at All Saints Middle School where he performed well as a English student, winning awards.

He earned his nickname ‘Big’ because he was overweight from the age of ten. He began dealing drugs from only the age of 12 unbeknownst to his mother. He began rapping as a teenager, performing with local groups and on the streets. Biggie Smalls left Bishop Loughlin Memorial High School and went to George Westinghouse Career and Technical Education High School, attending alongside DMX, Jay-Z and Busta Rhymes. He dropped out at the age of seventeen and was arrested in 1989 for weapon charges. He was arrested again a year later on drug charges and spent nine months in jail before he made bail.

After he was released from jail, he made a demo tape under the moniker Biggie Smalls which was both a reference to the character from ‘Let’s Do It Again’ and his large stature as he was 191 cm tall and weighed in at around 170 kg’s. He made the demo tape without any serious intention of gaining a record deal. However the tape was promoted by DJ Mister Cee and eventually heard by the editor of The Source who featured him in the unsigned hype column. His demo tape was heard by Uptown Records A&R who signed him.

A year later, Sean ‘Puffy’ Combs, a producer on the label was fire and started a new label, Biggie followed him to the new label. In 1993 he started recording music as the Notorious B.I.G and quickly began to raise his profile with a remix of ‘Real Love’. The name was the one that he would use for the remainder of his career. His remix of ‘Real Love’ reached number seven on the Billboard Hot 100. He then remixed ‘What’s The 411?’ and created his own solo track, ‘Party and Bullshit’. He also collaborated with LL Cool J and Busta Rhymes.

In 1994 The Notorious B.I.G has his first pop song success when he song ‘Juicy/Unbelievable’ reached number 27 on the charts, the song was the lead single on his debut album. The album ‘Ready to Die’ was release in 1994 and reach number 13 on the charts, it was certified platinum. The album was highly critically acclaimed and produced two hit singles ‘Big Poppa’ and ‘One More Chance’. The Notorious B.I.G befriended Tupac Shakur around the time of his albums release. The pair reportedly became close friends and spent time together at Tupac’s home.

In 1995 he released an album with his group Junior M.A.F.I.A titled ‘Conspiracy’. The group included his friends Lil’Kim and Lil’Cease who later has solo careers. The singles ‘Player’s Anthem’ and ‘get Money’ went Gold and Platinum. The Notorious B.I.G became the top selling rapper in the U.S in 1995 and won a number of awards at the Source Awards in that year, as well as rapper of the year at the Billboard awards.

In the same year as he was finding his way to the top he was also becoming embroiled in the East versus West Coast hip hop scene rivalry which also involved his now former friend, Tupac. Whilst he was serving time in 1995 Tupac accused Biggie of having prior knowledge of the robbery that resulted in him being shot five times.

The Notorious B.I.G began recording his second album in 1995 but the recording was delayed due to injury and legal disputes. He worked with Michael Jackson on the album HIStory during the same period of time. He was arrested twice in 1996, the first time for threatening and harassing fans who had asked him for an autograph and the second time for drug and weapon possession.

Tupac released a diss track in the same year, claiming to have slept with the Notorious B.I.G’s estranged wife, Faith Evans and claiming that his style and image had been copied by Biggie. He did not directly respond to the diss track but did reference it in Jay-Z’s song Brooklyn’s Finest. Tupac was shot in the same year and rumours immediately spread that Biggie may have had something to do with it.

Whilst recording his second album the Notorious B.I.G and Lil’Cease were arrested for smoking pot and their car was repossessed. They hire a Chevrolet Lumina as a replacement but the car has break issues and collided with a railing, injuring both Biggie and Lil’Cease. Biggie spent months in a wheelchair as a result but continued to work on his album. He was also embroiled in some legal trouble as a result of allegations that he has beaten the friend of a concert promoter.

In 1997 he was promoting and recording for his album ‘Life After Death’ and said that he hired security. A few days later after attending an after party Biggie and his entourage were at a red light when an Impala pulled up alongside his car and shot him with a 9mm blue-steel pistol, despite being rushed to hospital he was pronounced dead.

His second album was released sixteen days after his death and went to number one on the Billboard charts. In 1999 the album ‘Born Again’ was released with previously unheard tracks by the Notorious B.I.G.

The Notorious B.I.G had a child, T’yanna whom was born in 1993 to his longtime girlfriend. By the time of his daughter’s birth his relationship with his girlfriend was over. The following year he married Faith Evans whom he met at a photo shoot. Two year later she gave birth to Christopher ‘C.J’ Wallace Jr. He was also rumoured to have had a relationship with his protégé Li’Kim whom recalled being the ‘pride and joy’ of the rapper, although she did say he once locked her in a room to prevent her from recording with a group who was associated with Death Row Records and Tupac.