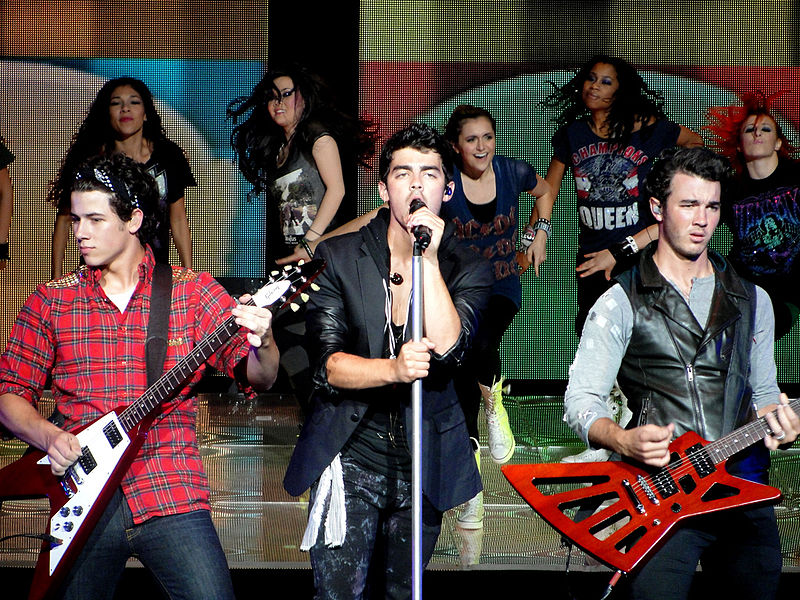 The Jonas Brothers are famous for being an American pop rock band which first formed in 2005 and gained popularity through the Disney channel network. The group’s line-up consists of Kevin Jonas, Joe Jonas and Nick Jonas. The group have had a successful singing and acting career and have featured in their own reality TV series.

The Jonas Brothers were nominated for a Grammy Award in 2008 for Best New Artist. The group has sold more than 17 million albums worldwide.

The Jonas Brothers began their career in 2005 when they recorded their first song, ‘Please Be Mine’ and were signed by Steve Greenberg from Columbia Records. Initially they planned to name the band ‘Sons of Jonas’ but eventually settled on the name Jonas Brothers. While they were in the studio working on their debut studio album, the brothers began touring throughout 2005 with artists such as Jump5, Kelly Clarkson, Jesse McCartney, the Backstreet Boys, The Click Five, Aly & AJ and The Cheetah Girls. In 2006 they performed as the opening act for The Veronicas. Their first album was titled ‘It’s About Time’ and involved collaborations with a number of high profile songwriters including Adam Schlesinger from Fountains of Wayne Michael Mangini from Joss Stone, Desmond Child from Aerosmith and Bon Jovi and Billy Mann who wrote for Destiny’s Child and Jessica Simpson.

The album was supposed to be released in 2006, but was pushed back on several occasions because the executives wanted to find an extra lead single for the album. The band did a number of cover songs, ‘Year 3000’ by Busted and ‘What I Go to School For’ and ‘Yo Ho (A Pirate’s Life For Me”’ for the Pirates of the Caribbean film. The band released their first single ‘Mandy’ in 2005 and the song ‘Time for Me to Fly’ for Aquamarine.

The Jonas Brothers went on tour with Aly & AJ in 2006 and created a theme song for the children’s animate series ‘American Dragon: Jake Long’. The band’s album was finally released in August 2006 as a limited release. The label, Sony was no longer interested in promoting the band and so they began to look into switching labels. In 2006 they also premiered the song ‘Joy to the World (A Christmas Prayer)’ and the song ‘Poor Unfortunate Souls’ for The Little Mermaid soundtrack.

In 2007 the music video for the bands cover of the ‘Year 3000’ dropped before they were officially dropped by Columbia Records.

After being between records the Jonas Brothers were signed to Hollywood Records in early 2007. The band began to appear in Jingles for Baby Bottle Pops singing the jingle. The band put out to additional singles, one was ‘Kids of the Future’ which was based on Kim Wilde’s ‘Kids in America’, the song was featured on the ‘Meet the Robinsons’ suoundtrack.

The band’s self-titled second album was released in August 2007 and reached number five on the charts in its first week. The Jonas Brothers made several appearances on television throughout 2007, guest-starring in an episode of ‘Hannah Montana’. During the episode the band played ‘We Got The Party’ with Miley Cyrus, the episode was seen by 10.7 million people. A few weeks later the band co-presented with Miley Cyrus at the Teen Choice Awards. The Jonas Brothers performed during Dick Clark’s New Year’s Rockin’ Eve and decided to perform their singles ‘Hold On’ and ‘S.O.S’.

The band embarked on a tour, their ‘Look Me in the Eyes’ tour in January 2008 and performed a number of songs that were planned for inclusion in their third album. In 2008 they worked with Miley Cyrus on her 3D concert film ‘Hannah Montana & Miley Cyrus : The Best of Both Worlds Concert’. They also appeared in a short film on Disney Channel which was filmed during their ‘Look Me In The Eyes’ tour, the film was titled ‘Jonas Brothers: Living The Dream’.

The Jonas Brothers’ third album ‘A Little Bit Longer’ was released in 2008, on single from the album was released approximately every two weeks by iTunes. The purchase of every song would count towards the cost of the entire album; every song released also included a podcast. Every song reached the number one spot on iTunes. After their tour ended the band announced that they would be the opening act at the ‘Best Damn Tour’ alongside Boys Like Girls. The band appeared in the Disney film ‘Camp Rock’, for which they co-wrote and co-produced six songs alongside Demi Lovato for her album ‘Don’t Forget’ which was released in 2008. The soundtrack for ‘Camp Rock’ debuted at number three on the Billboard charts and sold more than 188,000 copies in its first week. The band also appeared in the Olympics miniseries, called the ‘Disney Channel Games’.

In the summer of 2008 the band began their ‘Burnin’ Up Tour’ throughout North America , the tour started in Toronto, Ontario at the Molson amphitheatre.

In 2009 the band was featured in their own concert film, called ‘Jonas Brothers: The 3D Concert Experience’ which included footage of a performance by Demi Lovato and the brothers of the song ‘This is Me’ and Taylor Swift of the song ‘Should’ve Said No’.

The band released their fourth studio album ‘Lines, Vines and Trying Times’ in 2009, the album debuted at number one. In July 2009 the band announced that they had signed with a new label, Honor Society, a label that had been started by Hollywood Records.

The brothers took a hiatus to focus on their solo careers in 2011 and Joe released his debut album ‘Fastlife’ and embarked on a tour, whilst Kevin studied music production. The band also moved on from their label Hollywood Records. Despite rumours at the time of a split the band confirmed that they would release new material. In 2012 the band announced that they would be touring together and embarked on a world tour. The band’s fifth album was scheduled for release in 2013, called ‘V’.

In October 2013 the band cancelled 23 tour dates due to creative differences in the band and they confirmed that they had officially split a few weeks later. The bands fifth album was subsequently released as ‘Live’.

The Jonas Brothers performed at Capital’s Summertime Ball 2019 in the UK, where they performed their cover of the song ‘Year 3000’. In January 2020 the group released the single ‘What a Man Gotta Do’ and announced a residency in Las Vegas at the Park Theatre at Park MGM. The group also appeared at the Grammy Awards and revealed their new song ‘Five More Minutes’.